Based upon harrowing real events which were turned into a 1955 novel by Jean-Paul Clébert, The Blockhouse starts explosively with an Allied air raid on a Nazi prison camp. Six escaped prisoners take shelter in an underground blockhouse, which is soon destroyed by heavy shelling. Trapped underground, with an almost endless supply of food, wine and candles, the men must endure confinement with no prospect of escape or rescue.

Featuring a stunning ensemble cast that includes Peter Sellers (Hoffman), Charles Aznavour (Shoot the Pianist), Peter Vaughan (Symptoms), Jeremy Kemp (The Strange Affair), Per Oscarsson (A Dandy in Aspic) and Leon Lissek (Marat/Sade), The Blockhouse was filmed on the Channel Islands in a dank and dark underground bunker, giving the film a suffocating sense of claustrophobia. This newly restored edition marks the film’s worldwide Blu-ray premiere.

Even though this was shot locally, I've never got round to watching this, although my father-in-law has a copy of the old DVD (which I think is 4:3) and our local film society showed it some years back.

There was actually an article about this in our local newspaper the other day - part of a short run which covered locally shot feature films (including Walsh's Sea Devils and Truffaut's Adele H). With the added bonus of the short film (which I don't recall having seen before or know if it's available elsewhere) I can imagine this having a little sales spike from Guernsey residents.
Top

Dr Amicus wrote: ↑
Thu Oct 14, 2021 10:11 am
With the added bonus of the short film (which I don't recall having seen before or know if it's available elsewhere) I can imagine this having a little sales spike from Guernsey residents.

The short film's rather good - it's basically about the history of the WWII German occupation and how the residents of Guernsey did their best to undermine it at every turn. I'm not sure how scrupulously accurate it is, but I don't imagine anyone from Guernsey would be the tiniest bit minded to complain about how they're portrayed.

Remembered The Brave Don't Cry while reading the synopsis for The Blockhouse. Need to see that.
Top

Unless my info is wrong then The Channel Islands 1940-1945 has been on Talking Pictures. In fact it is on this Tuesday afternoon! They've also repeated the LWT series Enemy At The Door.

A Couple of Beauties (the extra on Girl Stroke Boy) has also been on Talking Pictures, possibly the last film of James Beck out of Dad's Army. The Sea Can Kill (the extra on The Brute) unfortunately hasn't turned up anywhere.
Top 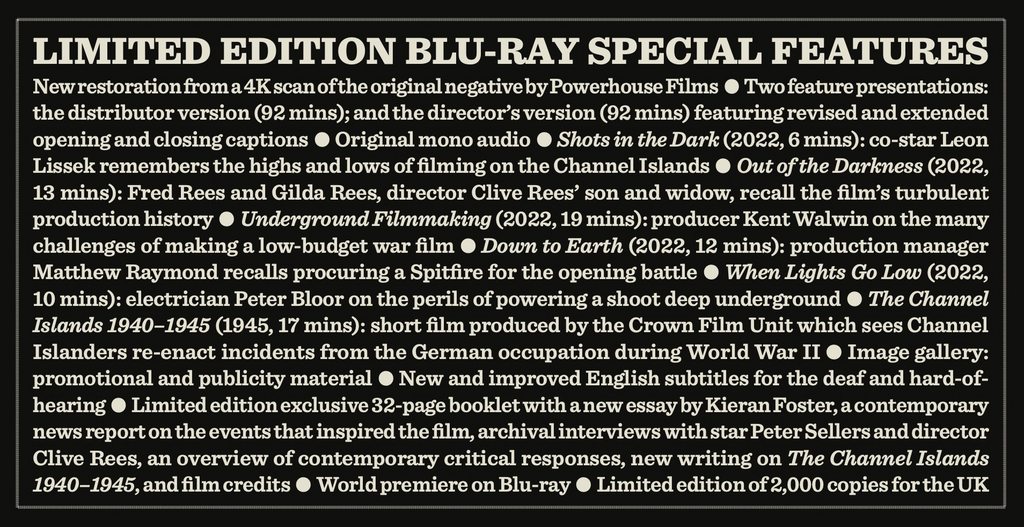 This will be getting released in North America as well, with their own separate print run of 2,000.
Top
Post Reply
7 posts • Page 1 of 1