Even Bunuel thought she was a bad actress. Taken from the great book, "Objects of Desire: conversations with Luis Bunuel." I can upload more shots of the conversation they have about the movie if anyone is interested? Bunuel says it's one of his most personal films. 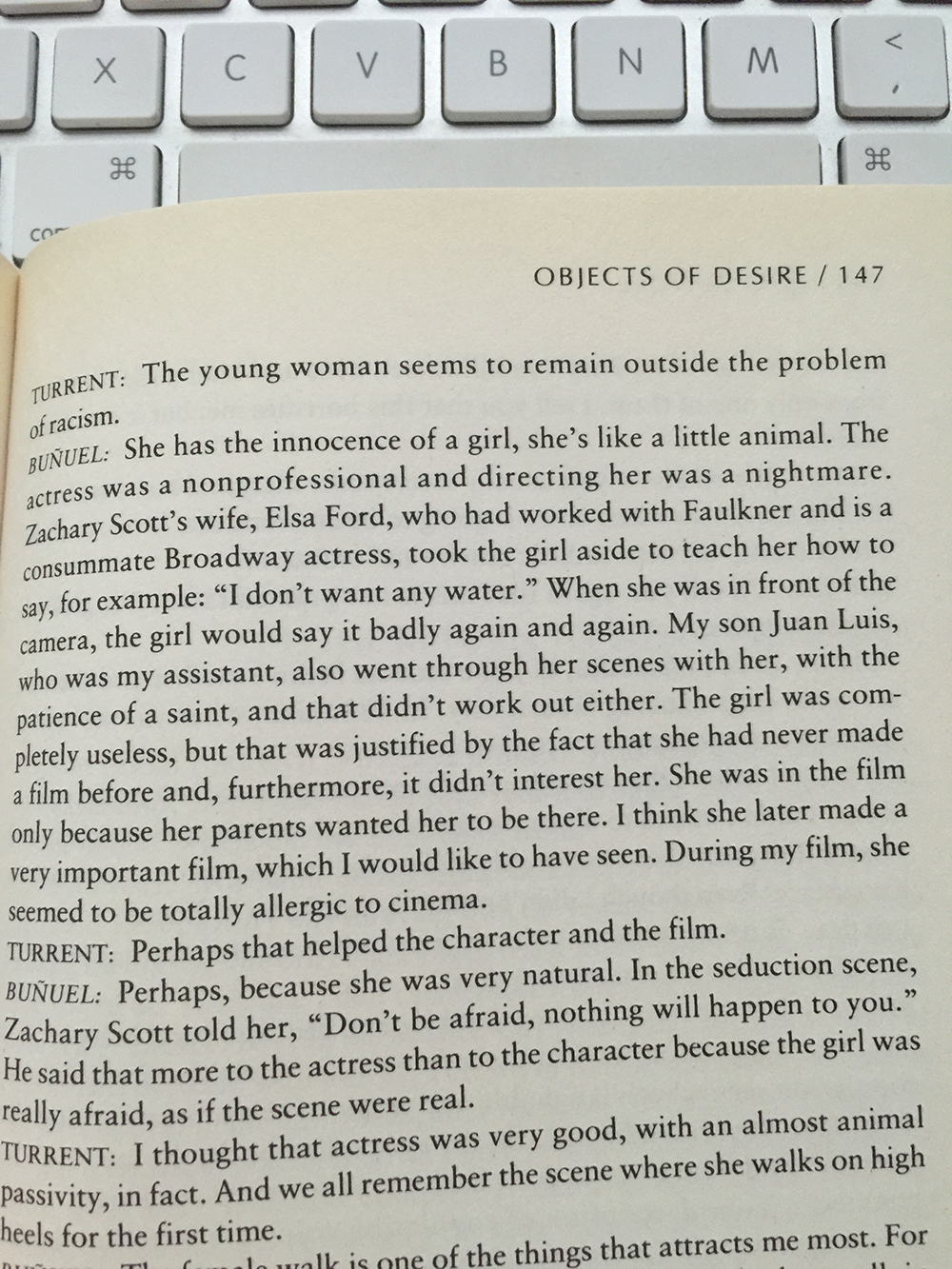 Bad actress doesn't mean bad performance and it sounds like from your excerpt that Bunuel enjoyed the final result even if it was hell to achieve.
Top

I quite like The Young One and re-watched it for the third time a few months ago.
I like that the girl isn't a professional actress and displays some awkwardness, as she is supposed to have been kept on this island with little schooling or contact with the outside world.

One thing that might throw a viewer is the tone and the way in which the three main characters all have a very different style/presence.
Zachary Scott is hard edged, brutish and shrewd.
The jazz musician/fugitive is more worldly, friendly and slang-spouting.
While the girl is sort of primitive, trusting, a blank slate.

Even though the premise of the film isn't subtle, I like how Bunuel adds some sly contrast. The black jazz musician is falsely accused of rape and so his life is in danger, while the white guy probably is guilty of rape (statutory at least), yet is confident he can sweep it under the rug. And even with the gun, the black man is still at a disadvantage due to cultural norms of the time.

I think Ascent to Heaven, Los Olvidados, and The Young One might be my three favorite Bunuel films.
Has Los Olvidados received a decent release? I saw it projected at the Shanghai Film Fest about 7 years back and assumed that a significant release was soon to follow.
Top

I'm satisfied with the Fremantle Home Entertainment - Region 0 - PAL DVD of Los Olvidados sold for peanuts on Amazon, in as much as my original exposure to the film was a VHS tape, and its picture quality is better than my copy of Ascent to Heaven.
Top

Olvidados but not forgotten ...

I phrased that poorly.
I don't worry much about picture quality (not a phrase you see at criterion.org much).
I wanted to ask if:
1) a restored print ever surfaced in the last 5+ years?
or
2) if otherwise there are older dvd editions readily available?

So you answered my 2nd (unasked question).
Though I'm in China, so not sure if it's worth figuring out how to get something from amazon to me.
Top

I just got back from a 35mm screening of Nazarín at the local cinematheque. It looked great. I think the restoration was done in England in 2007 (not sure, though). But even more interesting; it was shown in the intended ratio of 1.66:1. I had only seen Yume's not great (to put it, diplomatically) dvd release of this, and I thought that the 4:3 ratio was just due to them using the negative ratio, but having now seen it in 1.66:1 I can confirm that it's badly cropped, meaning that the left and right sides have been cut off.

This all prompts me to question; what's happening with Bunuel's Mexican output on blu? Still today, the not impressive Criterion release of Exterminating Angel and MOC's Death in the Garden (not one of his best ones) are the only ones available, correct? Clearly, though, HD masters exist, so why aren't they released? I mean, a box set featuring some of his best Mexican films would surely sell, wouldn't it? I find it kind of sad that it's always the later French era that's talked about and re-released, and I was bummed that The Young One was excluded from Studio Canal's new blu-ray box, which now focuses explicitly on his French films only. Of course, I love the French films, but they all feature his by then signature stinging sarcasm and humour, and I think some of his more serious Mexican films succeed exactly because they lack this. Especially Nazarín which I count among his all-time bests.

I suppose that it boils down to rights issues, but then again, many of the films are out on dvd, in UK Yume has released three of them and Mr Bongo has released two or three. I think?
Top

Can anybody speak to the quality of this DVD of El?
Top

Venice Classics, the section of the Italian film festival dedicated to the world premiere of the best recent restorations of film classics, has announced the screening of the 1955 Mexican film The Criminal Life of Archibaldo de la Cruz / Ensayo de un crimen by Luis Buñuel

Starring Ernesto Alonso, Miroslava, and Rita Macedo, The Criminal Life of Archibaldo de la Cruz tells the story of wealthy Archibaldo, who is a potential serial killer. Buñuel’s film has been restored by the Cineteca Nacional México in collaboration with the Sindicato de Trabajadores de la Producción Cinematográfica. 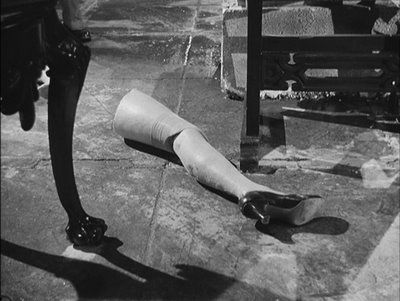 I will very happy if this title join the Collection
Top

New 4K restorations of L'age d'or and Los Olvidados are going to play at the NYFF on Sunday. These will be U.S. premieres, but they have played elsewhere before. Has anyone seen them? I've seen them in 35mm and it will be tough making both screenings on Sunday, so I don't want to make the effort if the restorations are unimpressive. (I still recall my disappointment with the 4K restoration for The Crime of Monsieur Lange that premiered at the NYFF.)
Top

Way back in Summer of 2006, I saw a restored print of Los Olvidados at the Shanghai Film Festival.
No idea if there's a new restoration or not. What I saw looked good if memory serves. I was anticipating a Dvd release to follow that 2005/2006 restoration, but don't know of one, unless it was in Spain or wherever.

Edit: Memory is untrustworthy.
Here's what I wrote at the time:

Unfortunately, the print was somewhat poor. Dark and somewhat scratched in the middle third, but then became noticeably brighter and clearer the last 15 minutes. There was also some poor projection, with focus issues and the bottom of the English subtitles off the screen (for any letters that extend below a line).

So I'm assuming there is a genuine new restoration. And a subsequent DVD would be most welcome.
Great underseen film.
Top

VCI is releasing El bruto in January as part of their Mexican Classics series. Labelled as a 4K restoration.
Top

(NOTE: I posted he following comments earlier in another thread but I have now moved them here, where I think they will be more relevant)

I felt let down by Nick Pinkerton's commentary on Kino Lorber's release of The Milky Way, a movie I have enjoyed ever since I first saw it on its first release. NP relies extensively on lengthy quotations from Raymond Durgnat's book on Buñuel instead of providing original thoughts; it is far from a bad source and there are several much less worthy books he could have chosen. I understand the book is OOP but it is not that difficult to obtain on the used book market so viewers do not really need NP to access that content if they really need to. He also misses on some trivial but amusing details, like the fact that the voice heard on the crashed car's radio is Buñuel's own and he gets a bit lost in the various heresies the two protagonists encounter; he also fails to elucidate the mystery of that distinguished gentleman pointedly shown in a few shots of the prologue walking the streets of Santiago de Compostela (these were shot almost clandestinely – Franco was still in power and they feared that the Viridiana scandal might still be fresh in the authorities's memory – with a friend of the director as the man in question).

Worse still, while he takes pains to point out this and that actor who had only one or two acting credits in their career, he fails to make any mention of Muni, the actress with the odd play-dough face and peculiar diction who appeared in all of Buñuel's later France-based movies; he called her his "mascot" in his autobiography written with Jean-Claude Carrière. This omission is all the more surprising since she plays two characters in this movie. NP's biggest howler is the statement "playing the bishop is one Claudio Brook" with no further detail about that actor, despite the fact that CB played prominent characters in The Exterminating Angel and Simon of the Desert, as well as bit parts in earlier Buñuel films, and had an international, if checkered, career. The precious seconds spent on other minor and forgettable performers woud have been better spent on him in my view.

Thankfully the Carrière interview and Peter Evans analysis partially compensated for the commentary's failings. But the latter may stand as a prime example of a case where a commentator might have passed on the opportunity because of a lack of knowledge or of affinity with the material.
Top

This was revealed by unlucky early customers to be a BD-R...
Top

Is it my imagination, or ism't the color balance on Criterion's BluRay a lot more appealing than that on the new BluRay? (based on comparative screen shots at least)
Top

MoMA is screening a new restoration of Nazarín and a documentary of the film from April 10-16:

"Luis Buñuel’s personal favorite among the films he made in Mexico...Out of distribution for many years, Nazarín was restored in 2019 by Mexico’s Cineteca Nacional and Fundación Televisa, and now takes its place as one of Buñuel’s masterworks.

"Much more than the standard 'making-of' documentary, Javier Espada’s 2015 Tras Nazarín (Following Nazarín) locates Luis Buñuel’s 1959 Nazarín within the Mexican landscape, using still photos taken by Buñuel and the great Mexican photographer Manuel Álvarez Bravo (the subject of a MoMA retrospective in 2014) to link the images of the film to the countryside as it was at the time of the shoot and as it is today. Interviews with Buñuel’s collaborators, among them the screenwriter Jean Claude Carrière and the actors Ignacio López Tarso and Silvia Pinal, evoke Buñuel’s methods; reflections from filmmakers (including Arturo Ripstein and Carlos Reygadas), critics, and scholars position this eternally audacious work in the context of Spanish Catholicism and Mexican history."
Top

That's great to hear that Nazarin has finally been given a restoration, hopefully a physical release is forthcoming from some label
Top

therewillbeblus wrote: ↑
Tue Mar 03, 2020 4:55 pm
That's great to hear that Nazarin has finally been given a restoration, hopefully a physical release is forthcoming from some label

This restoration has since been released on blur-ray by Elephant Films from France.
Top

Not English-friendly, I presume (if you have it)? The product listing only includes French subs, but as discussed elsewhere these aren't always reliable.
Top

You're right. Have to load an external subtitle.
Top
Post Reply
71 posts