MichaelB wrote: ↑
Tue Feb 16, 2021 11:04 am
I'd say "wholly proportionate" myself, but I was trusting that M Sanderson and anyone else reading it had a sense of humour.

Seriously, though, cleaving rigidly to something I said several years ago is as pointless as... well, retrospectively calling me out when I said back in 2017 that Indicator had no plans regarding The Pirates of Blood River (which had just been released by Twilight Time). Obviously, Indicator did subsequently put it out in early 2020, but it wasn't licensed until a good two years after the TT disc came out.

(Incidentally, nothing should be interpreted as any kind of tease about Joseph Losey's M, for which there are currently no plans.)

Ha, yes I do have a dry sense of humour myself.

I remember asking if any more Losey or Fleischer were planned, and Michael teased that one more title from one of those directors could happen. And it was one from the excellent batch of Loseys.

But I’ve seen so many times, titles that fall under the “no plans” category actually coming into fruition.
Top

I think as a general rule, if a comment is more than about, say, six to nine months old, it's most likely no longer valid, as new titles are acquired on a regular basis (usually in substantial blocks). As it happens, there are no other Loseys currently planned, although I'm sure if any were to become available in terms of both rights and decent materials they'd be taken very seriously as releasing prospects - when an indie label releases four films by one director, it's a safe bet that they're fans. (In fact, I think I put more hours into getting Eve right than I have with almost any other Indicator release!)
Top

Anyway, getting back on topic, here are two substantial reviews of Columbia Noir #2, from CineOutsider and Mondo Digital.
Top

MichaelB wrote: ↑
Sat Feb 20, 2021 8:11 am
(In fact, I think I put more hours into getting Eve right than I have with almost any other Indicator release!)

And I for one want to offer you unstinting thanks for that effort. It's a wonderful release.
Top

mteller wrote: ↑
Fri Feb 05, 2021 1:11 am
For me The Dark Past is the biggest stinker in this box. A lot of Freudian mumbo jumbo. The Sniper and Between Midnight and Dawn are both very good, the other three are okay. Not enough for me to buy this set, but that's usually the case with noir boxes. If I could construct my own "greatest hits" of these three, it would be:

Sounds like there’s at least two really damn good films per box. In the first one obviously The Lineup but I was also hugely impressed by Drive a Crooked Road. A really substantial character study that was dark and twisted.

Not opened my second set yet but I’ve heard great things about Murder by Contract and also Framed.
Top

Am I correct in assuming that these box sets are slightly slimmer than the Hammer, Castle of Fuller ones, closer to the Harryhausen sets? Six digipacks and a booklet would be about equivalent to the latter's size (thick booklet plus 3 standard cases) judging from what can be viewed on the Web. I remember someone mentioning that this was one of the templates available from the printer Indicator is using.
Top

Florinaldo wrote: ↑
Thu Mar 18, 2021 7:30 pm
Am I correct in assuming that these box sets are slightly slimmer than the Hammer, Castle of Fuller ones, closer to the Harryhausen sets?

Correct, they're the same width as the Harryhausen sets
Top 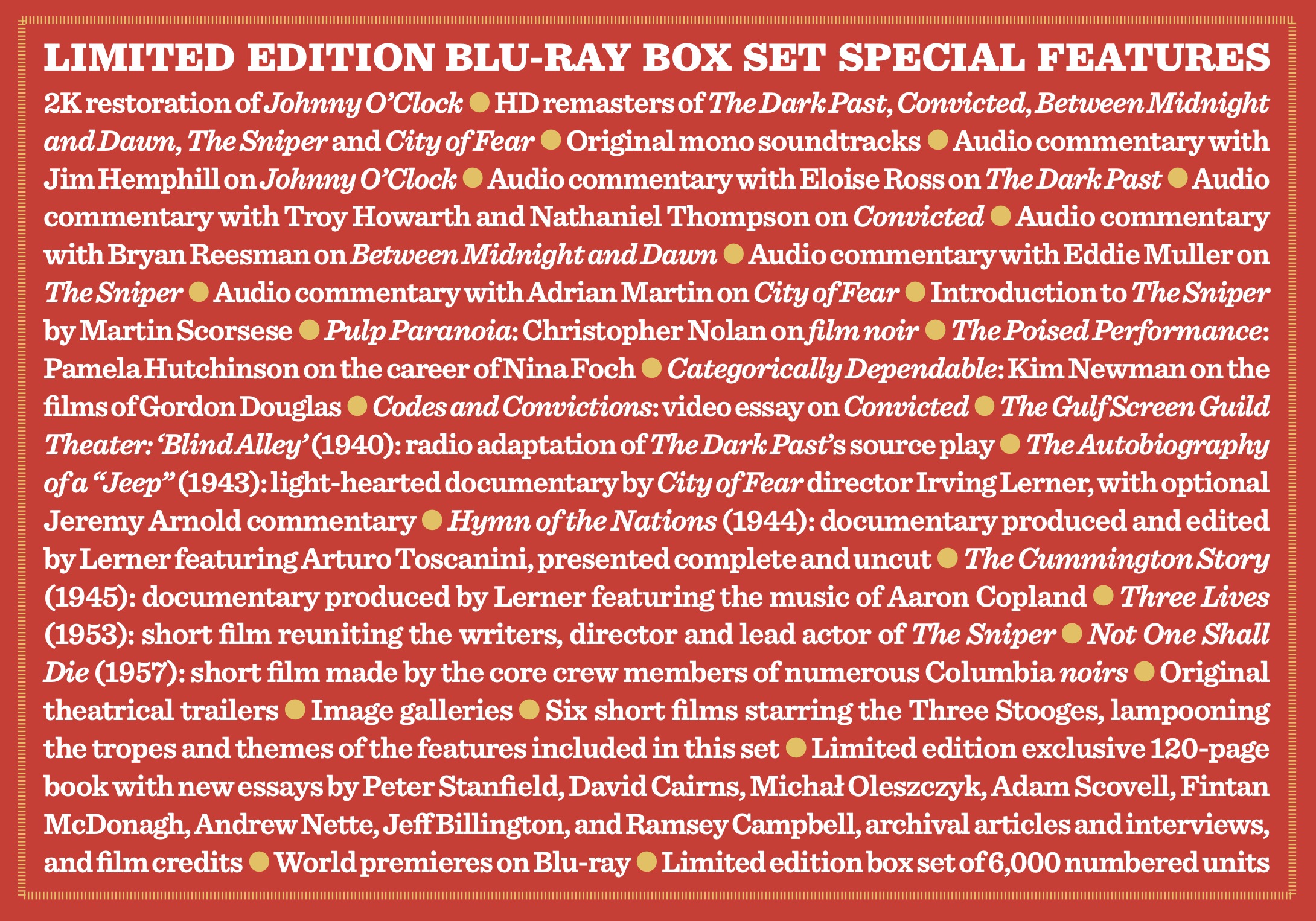 Between Midnight and Dawn:

domino harvey wrote: ↑
Mon Apr 12, 2021 10:16 am
I bet all the extras completists are killing themselves over all these Stooges shorts

I'm sure they were cheap (if not free) to license, and I can imagine some are glad they're here, but I can't fathom how the public let them make almost 200 of these.
Top