Discuss DVDs and Blu-rays released from Arrow and the films on them.
Forum rules
Post Reply
6 posts • Page 1 of 1
Message
Author 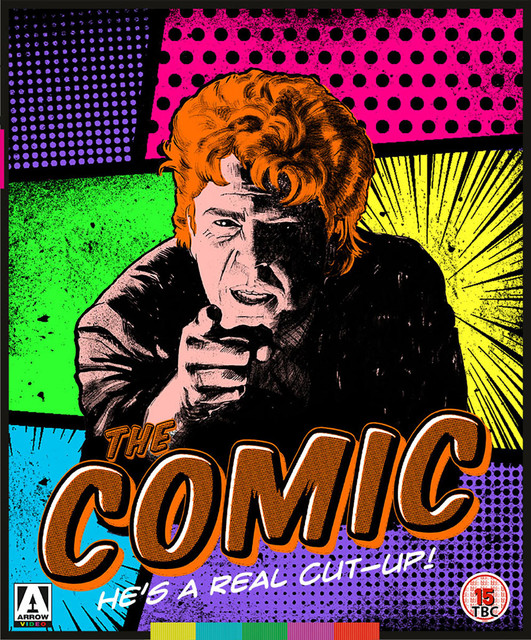 Stand-up comedy can be a cut-throat business, but in Sam Coex’s world, it’s downright murder… From the annals of bizarre cinema comes perhaps the most bizarre one of them all – 1985’s The Comic!

In a dystopian police state reality of indeterminate time and place, orange bouffant-haired comedian Sam Coex is eager for his big break. Realising that desperate times call for even more desperate measures, he slits the throat of his rival Joey Myers, leaving the way clear for him to carve his own niche on the comedy circuit. But success can be a fickle and fleeting mistress, and Sam soon finds his career on a downward turn when he falls foul of the powers that be.

Filled with more dry ice and lighting gels than an ’80s stadium rock concert, The Comic is a barmy, baffling and beguiling cinematic oddity shot on 35mm film in an alternate dimension. If you ever wanted to know the answer to the eternal conundrum “How does Pinocchio make love?” then this is the one for you!

I can't be the only one who is disappointed that this is not Carl Reiner's 1969 film of the same name, no?
Top

No you're not. When I saw the thread I assume it was Reiner's film.
Top

This film is kind of interesting only because it exists. There's something perversely admirable about making a film this weird and off-putting as one's calling card, but it's not good. A no-budget tale of a stand-up comic* at odds (kind of) with a sketchy dystopian police state. The lead actor had to bow out early on because it was a non-union shoot, so the film was rewritten on the fly so that he was murdered by a tertiary character played by the director's mate, who then became the protagonist by default. (Yes, this is one of those films where the commentary is more entertaining than the movie.) It's grimy and lurid (why have set design when you have a smoke machine?) but, aside from a couple of sequences which accidentally evoke Jarman, not especially visually evocative, just cramped and cheap.

* Yes, this is about a stand-up comic (and an excruciatingly bad one, at that), but nobody told the designer this crucial fact, so the abandoned cover above, the actual cover, and the whole package has a completely inappropriate - and lazy - "comic book" theme.
Top

No you're not. When I saw the thread I assume it was Reiner's film.

No you're not. When I saw the thread I assume it was Reiner's film.


Yes. Not as strong as Enter Laughing or his Steve Martin collaborations, but a very good film.
Top
Post Reply
6 posts • Page 1 of 1