I feel the urgent need to revive this thread after having watched the disc last night. This was even better than I hoped for after the comments here. The most fascinating thing for me is the ambiguity of the film; is it about Prussian education and authoritarianism, is it about homosexuality, what exactly is the nature of the relationship between Thiele and Wieck? The attraction clearly goes both ways, and it's fascinating how quickly Wieck can change from sympathetic schoolmistress to an almost demonical character. There's one shot where she stands behind Thiele apparently to soothe her, but with a look that suggests a vampirical attitude that seems to come straight out of "Nosferatu". These filmmakers clearly knew their Weimar silent cinema history, unsurprisingly, and the fantastic use of light and shade easily transforms the institute into something very close to a gothic castle in many scenes. Whatever the importance of the film may be from a sociological standpoint, it's first and foremost an incredibly intense visual masterpiece. Those close-ups.... are we talking Bergman here?!

I don't find that arthaus edition all too bad, btw. The print used clearly is several generations down from the negative, resulting in that somewhat blurry and grainy image, but it's well transferred, sound is very clear and easy to understand, and there may have indeed been some scratch removal at work. The only serious flaw is (again) the aspect ratio. This was clearly shot in 1.19, and as a result with this full frame transfer we get the usual chopped heads (not apparent in the caps above, but very clearly and sometimes disturbingly visible in other shots). Will these dvd producers never learn....? All in all, I would rate this disc higher than the arthaus "Alexanderplatz" in print and transfer terms.

As to the extras: more than seem to be there at first glance. There are two highly illuminating pdf-files on the disc, one being a scholarly essay on the film and other films by Thiele and Wieck (most notably a film called "Anna und Elisabeth" from 1933, which seems to tackle similar issues, does anyone know it?), the other a fantastic interview with Thiele from the 1980s. If you can read German and care to print these files, you probably get the equivalent of a very good MoC booklet here. The good thing about these documents is that they shed an interesting light on the film's reception over the years. While it seems to have been initially regarded mainly as an indictment of Prussian authoritarianism, since the 70s it was apparently highlighted as the first film dealing with lesbian issues or at least as a first example of decidedly female filmmaking (as opposed to a male perspective). It is indeed surprising that these latter aspects seem to have gone almost unnoticed when the film first came out, but it is equally interesting that Hertha Thiele points out that actually Leontine Sagan knew nothing about filmmaking and had to work very closely with 'artistic supervisor' Carl Froehlich and the male cameraman and crew not just for approval of what she was doing, but also apparently to get things right in the first place. Apparently it was also Froehlich who decided to tone down the lesbian overtones of the story and who devised the ending (in the original play, Manuela actually jumps out of the window and kills herself, which is of course changed here). One wonders how much this actually is really a film directed by Sagan, and whether Froehlich shouldn't deserve at least additional directorial credits, making the whole argument about it being a 'female' film somewhat dubious. I find this reception history interesting because it shows how critics can twist and narrow a film's meaning to shape it to their needs (Kracauer's reading being another, though different example); clearly the things Thiele brings up in that interview are not necessarily to the liking of her feminist interviewers, but thankfully they give us Thiele's views in full.

Anyway, as I said initially, I'm stunned, and the film is a great example of how well Weimar cinema was thriving in the early 30s and how smoothly the transition from silent to sound films was managed in Germany, at least occasionally. All this was lost from 1933 on, of course, resulting in an endless string of second-rate comedies and other entertainment films. But these very early German sound films seem to deserve much more attention in general, and they are even less known than the great silent classics over here. Good to see that arthaus managed to get this one out then, despite the aspect ratio flaw. Now, can we please have this in 1.19 from MoC soon?!!!
Top

I, too, was blown away by this film. A stunning work. Can't really add to what you've said. Thanks for your remarks.
Top

id est absolutely. The film is truly amazing, and I really need to get me mitts on that disc... though for sentiments sake I could never toss my trusty old ancient Janus vhs.
Top 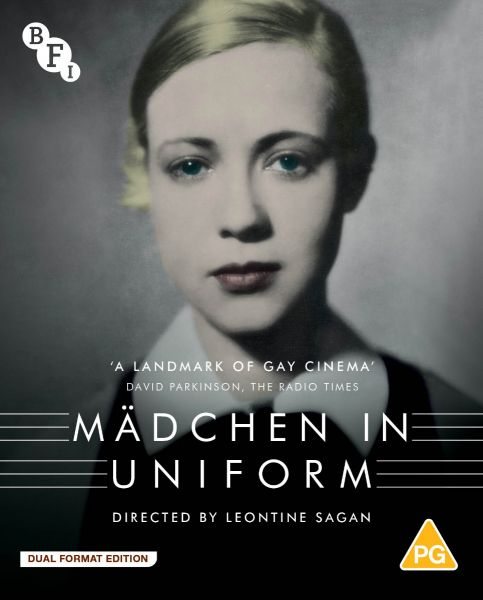 Mädchen in Uniform
A film by Leontine Sagan

Released on Blu-ray, DVD, iTunes and Amazon Prime on 8 March 2021

Based on a play by Christa Winsloe and directed by Leontine Sagan, Mädchen in Uniform (1931) is an undisputed landmark of queer cinema and a key film of the Weimar era that also carries a potent anti-fascist message. The BFI brings this pioneering and internationally acclaimed lesbian love story to Blu-ray for the first time in the UK in a Dual Format Edition on 8 March. Special features include a new commentary, a new video essay – Women and Sexuality in Weimar Cinema, How To Be A Woman – treasures from the BFI National Achive and more.

After the death of her mother, sensitive teenager Manuela (Hertha Thiele) is sent off to a strict Prussian boarding school and encounters sympathetic teacher Fräulein von Bernburg (Dorothea Wieck). But when Manuela’s fondness for her teacher turns into a romantic attachment, it becomes a school-wide scandal.

Special features
• Presented in High Definition
• Feature commentary by film historian Jenni Olson (2020)
• Women and Sexuality in Weimar Cinema (2021, 13 mins): a new video essay by film critic Chrystel Oloukoï
• The Kiss – The Women Who Made a Movie Masterpiece (2020, 103 mins, audio, selected episodes): writer and journalist Bibi Berki discusses the production history of Mädchen in Uniform and the exceptional women who made it
• How To Be A Woman: a selection of treasures from the BFI National Archive, including Tilly and the Fire Engines (1911, 3 mins), Hints and Hobbies No.11 – ‘Hints to the Ladies on Jiu-Jitsu’ (1926, 4 mins), Day at St Christopher’s College and School (c1920s, 19 mins), 4 and 20 Fit Girls (1940, 11 mins)
• ***FIRST PRESSING ONLY*** Illustrated booklet with new writing by So Mayer, Chrystel Oloukoï, Bibi Berki, Henry K Miller and Sarah Wood

Wonderful! Lovingly assembled edition. Too bad they couldn’t include the ‘50s version as an extra.
Top

There was an existing thread about this film. Not sure if they should be merged.
Last edited by Gregory on Mon Mar 08, 2021 6:19 pm, edited 1 time in total.
Top