Discuss DVDs and Blu-rays released by Criterion and the films on them. If it's got a spine number, it's in here. Threads may contain spoilers.
Post Reply
17 posts • Page 1 of 1
Message
Author 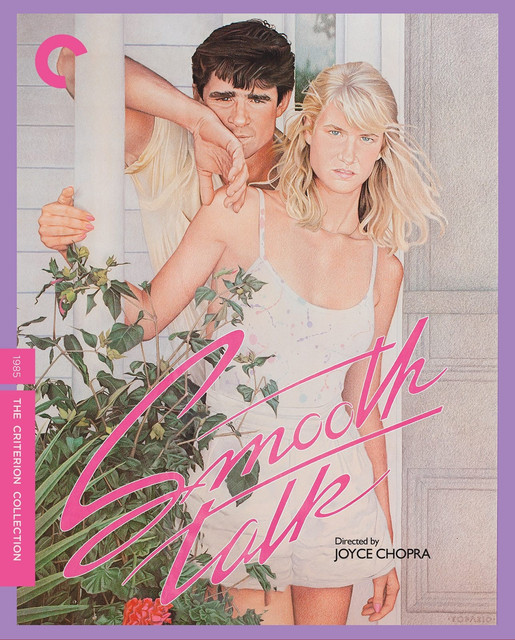 Suspended between carefree youth and the harsh realities of the adult world, a teenage girl experiences an unsettling awakening in this haunting vision of innocence lost. Based on the celebrated short story “Where Are You Going, Where Have You Been?” by Joyce Carol Oates, the narrative debut from Joyce Chopra features a revelatory breakout performance by Laura Dern as Connie, the fifteen-year-old black sheep of her family whose summertime idyll of beach trips, mall hangouts, and innocent flirtations is shattered by an encounter with a mysterious stranger (a memorably menacing Treat Williams). Winner of the Grand Jury Prize at Sundance, Smooth Talk captures the thrill and terror of adolescent sexual exploration as it transforms the conventions of a coming-of-age story into something altogether more troubling and profound.

This is a phenomenal movie - one of the finest coming-of-age tales ever filmed. Dern and Williams are electric, performing an extremely precise screenplay that really shows the power of words. Just by saying all the right (or wrong) things, this strange man cuts this girl to the bone and changes her entire world. It’s really something to behold. I look forward to revisiting it when this disc comes out (lucky me I managed to sell the Olive disc for a pretty penny on eBay a few months back). I’m glad to see Smooth Talk get a special edition, since its ripe for discussion and contextualization.
Top

This looks like a stacked edition. The inclusion of Where Are You Going, Where Have You Been? is great, and I'm interested to see the other Oates-related content.
Top

Excellent! I have been curious about this since its opening credits got mashed up with those from Rob Reiner's The Sure Thing in an Are Sounds Electrik video earlier this year!

And it is interesting to see it was produced by Martin Rosen, better known as director of the animated films of Watership Down and The Plague Dogs!
Top

This is a pretty cynically twisted coming-of-age story when framed as such, but it's an apt descriptor. The script and deliberate pace ruminate on the liberations from restrictions of adolescent yearning, before slamming the door on the ignorance and innocence at once with consequences of what's really out there, and- more pessimistically- the inescapability of avoiding real-world horrors when your sexual development and mere presence is in the field of vision of others outside of your control. What's arousing and what's scary, the blurry line between dangerous and confident, all collide to immerse the viewer in the confusing and daunting experience of sobering up to the world without the skills to see clearly, which is reflected in the enigmatic responses of Dern that mimic flirtation but are questionably rooted in pleasure from the high-stakes games or fear-based defensive mechanisms. The discomfort certainly comes from being afraid of the other's unpredictable force, but there's also a strong hint that the real stinger is sourced in how what transpires may make Dern's own slight perversions of power dynamics conscious to herself, which is unbearable to any and all breeding from her social context. The tonal change may shock some, but it's earned, and boy is it difficult to earn this stomach-dropping third act.
Top

It's interesting that Smooth Talk and Girlfriends were released by Criterion in close succession. Both are incredibly strong feature debuts
from filmmakers with scant additional major motion picture credits, and it's frustrating that they were both basically cut down by the industry. Chopra
was let go from Bright Lights, Big City by producer James Bridges, ostensibly because she "choked" and was too indecisive on set and she also had her
1990 film The Lemon Sisters recut by Miramax. Other directors like Julie Dash (Daughters of the Dust) and Rosalind Chao (Thousand Pieces of
Gold) are still trying to make theatrical follow-up features 3 decades later.
Top

Nice to see Criterion use the original poster art, since that's a rarity for them. I wish they would do that more, or embrace reversible covers allowing for new and original artwork.
Top


Ha! Good catch. Yes, Nancy Kelly directed it. Excellent film that got a nice restoration and re-release from Kino.
Top

"New interviews with actors Mary Kay Place and Treat Williams" have been added to the special features.
Top

It could've been "Smooth Tooze" if GT had reviewed it...
Top

Do you guys even know how puns work?
Top

Half of the DVDBeaver "puns" on this forum aren't puns at all!
Top

Puns? I thought the point was to replace a word with Beaver to make the dirtiest sounding title possible.
Top

Yeah, properly speaking it’s more “wordplay” than it is “puns.” (Although the alternative of my custom user title “Beaver to Heaven” came close.)
Top
Post Reply
17 posts • Page 1 of 1