Discuss DVDs and Blu-rays released by Criterion and the films on them. If it's got a spine number, it's in here. Threads may contain spoilers.
Post Reply
21 posts • Page 1 of 1
Message
Author 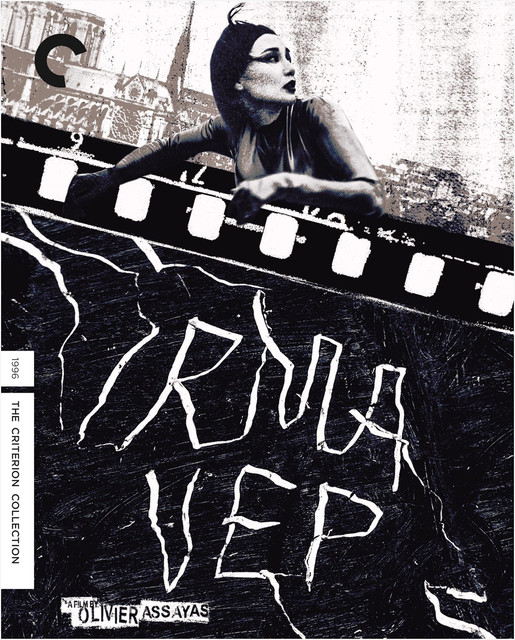 The live-wire international breakthrough of Olivier Assayas stars a magnetic Maggie Cheung as a version of herself: a Hong Kong action-movie star who arrives in Paris to play the latex-clad lead in a remake of Louis Feuillade’s classic silent crime serial Les vampires. What she finds is a behind-the-scenes tangle of barely controlled chaos as egos clash, romantic attractions simmer, and an obsessive director (a cannily cast Jean-Pierre Léaud) drives himself to the brink to realize his vision. Blending blasts of silent cinema, martial-arts flicks, and the music of Sonic Youth and Luna into a hallucinatory swirl of postmodern cool, Assayas composes a witty critique of the nineties French film industry and the eternal tension between art and commercial entertainment.

Jean-Luc Garbo wrote: ↑
Mon Jul 09, 2007 5:44 pm
I recently watched this after hearing about it here and wanted to ask what everyone thought of it. This was my first Assayas film as I still haven't seen Demonlover and I found it quite enjoyable. I still feel like I may be missing something about the film, though. Is it really just a film about film-makers? Is it supposed to be Assayas' own Day For Night?

I adore this film. Wish it were available on a decent DVD.
Top

I don't think of this as primarily a film about filmmaking in the Day for Night sense. As we find out at the end, the film in production is by no means conventional, and what we see of the filmmaking process doesn't really match up to the outcome. I think this is far more about the characters and the issues surrounding them: Maggie and her cultural isolation, Jean-Pierre and his breakdown. It's also, like a lot of Assayas' best films, about the slippage between roles and reality (Maggie stalking around the hotel in costume is a brilliant scene that sets up much of Demonlover), and specifically about "going too far" in a given role (assigned or adopted), and it's about pure cinematic sensation (the use of music, particularly 'Tunic' in the aforementioned scene - see also the assaultive use of Neu! at the start of Demonlover - and the fragments of Jean-Pierre's film at the end). It's also a Feuillade tribute, of course, but rather an oblique one. Like denti, I love this film and wish somebody could put out a good DVD. It's sort of ridiculous that Les Vampires is in a better digital state!
Top

Alicia Vikander to star in HBO and A24's adaptation/remake/whatever, written and directed by Assayas
Top

I hope Assayas is somehow able to wrangle Jean-Pierre Leaud in as well, still trying to get his remake off the ground.
Top

Damn it. I just got this in from Zavvi not three days ago.

Is there any reason to buy the Criterion if I already have the Arrow and also already own Les Vampires on blu?
Top

Weird: the Arrow only lists 2.0 Stereo, while the Criterion only lists 5.1 DTS-HD MA Surround.

And it seems stupid for Criterion to license one Les Vampires episode from Kino instead of the director's commentary from Arrow...
Top

The commentary isn't even from Arrow, so why would they license it from them? Regardless, this seems like a better release compared to Arrow's, so I'll happily be buying this.
Top

It says 2.0 Stereo for me as well, but I checked the disc and it has the 5.1 surround option. It's just that the stereo track is the original, but it is odd to not mention the 5.1 anywhere. Even more odd that Criterion would not license the commentary but choose to add the Les vampires episode. I don't remember this particular episode, I'm guessing it ties in to the remake shoots in Irma Vep and potentially the Musidora doc. Perhaps it's not worth a double dip but I love this film so much I will probably end up getting it anyway.
Top

Yeah, forgive me for not doing a deep-dive into extras production history and rights

I'd still rather they have licensed that commentary from whomever than an episode of Les Vampires that I already own on BD.

Save essays, the only "new" extra is the Musidora doc—everything else is on the Arrow disc, but Criterion adding an extra hour and 50 minutes of video which does not give me great hope for the Criterion edition looking better than Arrow's.

And if Criterion drops the original stereo audio while the Arrow includes both the original and the surround remix, it's definitely less of a slam dunk for me.
Top

It's listed as 2 discs, so presumably the ep from Les Vampires will be on the second disc.
Top

This is very often the deciding factor between a Criterion Collection edition and its Arrow counterpart for me, all other things being more or less equal.
Top

No need for the snark, I was just making a correction. Not sure why the automatic assumption here is that they couldn't be bothered to license the commentary, especially when they just licensed 2 older commentaries for 'Memories of Murder'. There could be a good chance that Zeitgeist Films won't license it out to them for whatever reason, or it could be a cost related issue. However, I won't be losing sleep over the missing commentary since they managed to get a new interview with Assayas, another thing that Arrow doesn't have. However, the inclusion of only 1 soundtrack is indeed strange and someone should email Criterion about it.
Top

Your correction was "just" phrased snarkily. And yes, it does seem odd to me that Zeitgeist would license to Arrow but refuse Criterion—it's not like anyone else is going to be licensing it from them in Region A. "Regardless," it's annoying to me that I held off two years for the Criterion release for the region convenience factor, and might end up having reason to go with the Arrow release anyway.
Top

I own the Blu-Ray Arrow : the extra seems to be the same, or do you find something exclusive to the Criterion collection ?
The encoding of the Arrow was great : great argentic texture, Maggie Cheung looks terrific in latex. Great companion to the WKW box set.
Too bad that Heroic Trio and the other movies shown on the VHS are not available on blu-ray and restored.
Top

The Zeitgeist DVD is one of my greatest-ever Half Price Books finds--can't wait for the upgrade!

In related news--it was reported last month that Assayas is working on his own remake for HBO, with Alicia Vikander starring.

I sent an email about the audio track and the commentary and this is the response I received:


Thank you for reaching out. My apologies for the delayed reply, I'm happy to help!

We aren't including the original 2.0 mix on our IRMA VEP Blu-ray release and, in this case, it's because this new 5.1 is director approved and the preferred track.

The good news is that no audio from the original track will be lost if you don't have a 5.1 set up. When we release a 5.1 surround soundtrack that track will "fold down" to stereo on 2.0 systems. This process should happen automatically in the Blu-ray player and is invisible to you. Also, no audio info is lost in the process and the end result is almost always indistinguishable from the 2.0 mix.

In regards to the audio commentary by Olivier Assayas and Jean-Michel Frodon, note that the previous tracks were actually not a commentary, but a recording of a talk and audience Q&A that Olivier gave at Berkeley in 2007. As the conversation is not scene specific to IRMA VEP, and mostly focuses on Olivier's earlier career, it was decided that it did not make sense to use this audio as a commentary track for IRMA VEP. The information about Olivier's years as a film critic and his earlier films, as well as new information about the making and inspiration for IRMA VEP, are included in a new interview that we conducted with Olivier for this release.

Likewise, the commentary track by Adrian Martin found on other releases of MASCULIN FEMININ will not be included on our Blu-ray upgrade. This release is an upgrade from DVD, so will feature a new 4K digital restoration but we did not include any new special features that weren't already on the DVD.

In regards to the audio commentary by Olivier Assayas and Jean-Michel Frodon, note that the previous tracks were actually not a commentary, but a recording of a talk and audience Q&A that Olivier gave at Berkeley in 2007. As the conversation is not scene specific to IRMA VEP, and mostly focuses on Olivier's earlier career, it was decided that it did not make sense to use this audio as a commentary track for IRMA VEP.

Thank you very much for that. Always found it odd when they would slap on a random lecture or interview as a "commentary" track.

A real shame about Martin's Masculin Feminin track, though.
Top

The soundtrack decision is dumb... If it originally played theatrically with stereo audio, including the original audio is just basic best archival practice, even if the surround changes are minor and the disc defaults to the 5.1 remix because it's director preferred. With the whole set spread out over two discs, it's not like the feature disc couldn't spare the space, and arguing that "no audio will be lost" on a two-channel set up is entirely missing the point. It's the same revisionism as the WKW set, albeit on a much smaller scale: it's fine if you want to do that, but let me make that decision.
Top
Post Reply
21 posts • Page 1 of 1