Discuss DVDs and Blu-rays released by Eureka/Masters of Cinema and the films on them. If it's got a spine number, it's in here.
Forum rules
Please do not clutter up the threads for MoC titles with information on pre-orders. You can announce the availability of pre-orders in the MoC: Cheapest Prices / Best Places to Buy / Pre-Orders thread. Any posts on pre-orders in any other thread will be deleted.
Post Reply
11 posts • Page 1 of 1
Message
Author 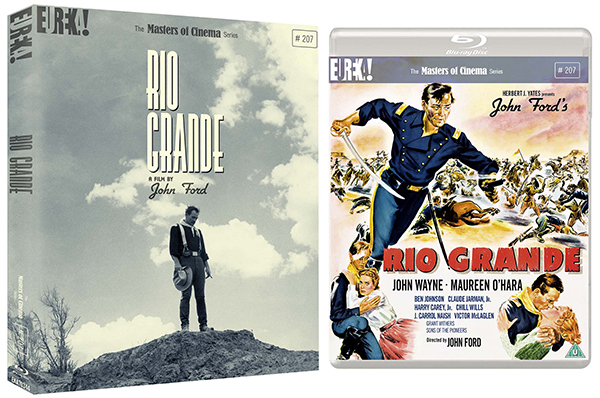 Perhaps one of the most underrated of the collaborations between director John Ford and star John Wayne, Rio Grande manages to be both a conclusion and a new beginning for this most iconic of actor-filmmaker collaborators. The film is the final entry in Ford and Wayne’s “Cavalry Trilogy,” following their hits Fort Apache (1948) and She Wore a Yellow Ribbon (1949). Yet it also marks the first of five appearances Wayne made with actress Maureen O’Hara, three of which were directed by Ford.

Wayne is Lt. Col. Kirby Yorke, attached to the Texas frontier in 1879 to protect settlers from attacks by Apaches. When Yorke’s son – a West Point flunkee turned Army private – is assigned to his father’s regiment, tensions flare upon the arrival of Yorke’s estranged wife Kathleen (O’Hara), who wants their teenaged son out of Yorke’s unit. After Apaches attack, the stakes of Yorke’s mission escalate, and he must journey to Mexico where the Apaches are hiding out. With his son and two old recruits (Ford/Wayne regulars Ben Johnson and Harry Carey Jr.) as accompaniment, Yorke faces his toughest battle.

The Quiet Man (1952) may be the most fondly remembered collaboration between Ford, Wayne, and O’Hara, but ironically, that classic wouldn’t even exist if not for Rio Grande, as studio Republic was so (incorrectly!) certain that the later film would lose money, that they only agreed to its production on the condition that Ford and his collaborators make another western first to cover the costs. But Rio Grande stands on its own as yet another outstanding meeting of these remarkable talents.

Wow, not one of my favourite Fords, but with packaging that beauitful and with those extras it is very hard not to be tempted indeed.
Top

The Artisan DVD ain’t half bad for being 20yrs old. A lot of those extras are included. Overall the movie may not work as well as other Ford pictures of this era, but Victor McLaglen is quite funny.
Top

I think it's easily the best of the Cavalry Trilogy, very excited to replace the Olive Blu-ray with this
Top

I had been holding off on the Olive because of its barebones and high price (and a hope that it would get a Signature edition), but this is on Amazon Prime, so I'll definitely be checking this out for Ford's birthday tomorrow. I'm probably one of the most unbegrudging Ford admirers on this forum, so I rate the other two Cavalry Trilogy installments very highly, so we'll see for this.

Regardless, the packaging and extras look wonderful, and whenever Tag Gallagher shows up to talk Ford, one should be grateful.
Top

HinkyDinkyTruesmith wrote: ↑
Fri Jan 31, 2020 12:21 am
whenever Tag Gallagher shows up to talk Ford, one should be grateful.

nitin wrote: ↑
Sat Apr 18, 2020 1:04 am
Dvdbeaver frequently demonstrates that they have no idea about technical matters.

I think JW looks great with a mustache in this.

Indeed he does. Another one of my favorite facial-haired-Wayne film's is "Reap the Wild Wind", where he sports some killer sideburns. :D
Top

After 80% of this movie I felt like I had shortchanged it... It’s one of Ford’s best. Then the stupid ending sours things for me and I remember why I like She Wore a Yellow Ribbon so much more.

Still Sons of the Pioneers are fantastic, the romance works better than SWAYR, as does the McLaglen comedy.
Top
Post Reply
11 posts • Page 1 of 1