Discuss DVDs and Blu-rays released by Eureka/Masters of Cinema and the films on them. If it's got a spine number, it's in here.
Forum rules
Please do not clutter up the threads for MoC titles with information on pre-orders. You can announce the availability of pre-orders in the MoC: Cheapest Prices / Best Places to Buy / Pre-Orders thread. Any posts on pre-orders in any other thread will be deleted.
Post Reply
181 posts
Message
Author 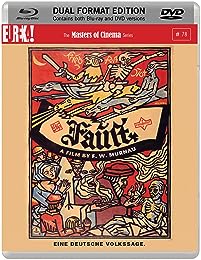 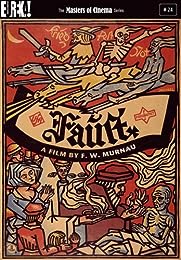 Murnau's last German film features astonishing photography, magnificent art direction, and special effects which retain the power to amaze. Freed from the constraints of psychological narrative, Murnau's mastery of cinematic technique places Faust at the pinnacle of the silent era, its barrage of visceral and apocryphal imagery contrasting with the simplicity and directness of its spiritual theme.

In collaboration with the screenwriter Hans Kyser, Murnau fused Faust's script from German folk legend and the works of Goethe, Gounod, and Marlowe (particularly using the latter's tone). Faust's tale is a classic one of a man who sells his soul to the devil. In an attempt to gain control of the Earth, Mephisto (Emil Jannings) wagers an angel (Werner Fuetterer) that he can corrupt the soul of the elderly professor Faust (Gosta Ekman). As the Horsemen of the Apocalypse ride demonically through the sky, Mephisto towers over Faust's hometown unleashing a plague that spreads amongst its inhabitants. Faust, unable to find a cure for the citizens who are dropping dead around him, renounces both God and science invoking the aid of Satan through a mysterious book that he chances across.

Murnau, a perfectionist, shot multiple takes of each scene with only prime takes making the final German domestic cut of Faust. Only the prints made for export outside Germany were seen until recently, indeed this version was at one time thought to be the only version (it used discarded takes, errors, less impressive special effects, and human stand-ins for real animals). Using the nitrate duplicate negatives printed by UFA in 1926 (and an array of international sources) Murnau's favoured domestic German version of Faust has now been meticulously reconstructed by Luciano Berriata for Filmoteca Espanola from which this newly restored transfer is sourced. The Masters of Cinema Series is extremely proud to be able to present the original German domestic cut of Faust for the first time on home video in the UK.

• Gorgeous 1080p transfer of the domestic German print, with original German intertitles and optional English subtitles
• Full-length audio commentary by critics David Ehrenstein and Bill Krohn
• A 20-minute video piece with critic Tony Rayns discussing the film
• An orchestral score by Timothy Brock, plus a specially commissioned harp score by Stan Ambrose
• New piano score by Javier Pérez de Azpeitia (Blu-ray only)
• The complete export version of the film
• The Language of Shadows, a 53-minute documentary on Faust (Blu-ray only)
• Video comparison of the domestic and export versions of the film
• 44-PAGE BOOKLET containing an essay on Faust by writer Peter Spooner, a new translation of excerpts of Éric Rohmer’s brilliant treatise on the film, and rare archival imagery.
Last edited by Lino on Sat Aug 26, 2006 11:04 am, edited 4 times in total.
Top

Was this like Lang's "Metropolis" cofinanced between UFA and Paramount (the US studio)? That would explain the "ParUFAmet" logo on that (presumably) old poster used for the DVD cover. Or was that simply UFA's "art film" production unit?
Top

Any releasedate for "Faust"?
Top

Will MoC be using the Luciano Berriatua restoration (which appeared on the Spanish label Divisa Red [without English subtitles])? I've held off buying the R1 Kino edition in the hopes that someone would better it. Looks like my patience may have paid off. Keep that Murnau coming!
Top

Happys days, great sleeve - even if it has two members of the KKK plastered on it.
Top

so when is the release date? state secret? no word on any of the sites. This is far too essential to fall back on the backburner.
Top

damn you guys plan ahead. Well, yet another reason to look forward to spring.
Top

skuhn8 wrote:damn you guys plan ahead. Well, yet another reason to look forward to spring.

Can you give us any word on the specs to this? I'm more excited about this disc than anything else currently announced for 2005 (including the Peckinpah box).
Top

WOW! This is great news for Goetheans! I feel that the Luciano Berriatua restoration, or perhaps it is the actual Divisa Red transfer is a bit too bright in the DVD Beaver comparison. Any thoughts? Nick? This does not bother me that much; overall, the transfer is stunning compared to all other transfers. I own the Kino and love Goethe's story and Murnau's film. Both are zeniths in their respective mediums and I deeply appreciate MoC's decision to create what will hopefully be the definitive DVD edition of this phantasmagorical lesson in Cinema!
Last edited by Gordon on Sat Dec 10, 2005 5:35 pm, edited 1 time in total.
Top

Will March bring this one and the two other Murnaus or will it be FAUST, TONI and ABHIJAN?
Top

On a certain film listserv today, the following was posted by Bill Krohn, in response to a member's note about his desire to re-see 'Faust' soon:

"Wait a few months. Masters of Cinema is putting out a new DVD for which David E and I recorded the commentary yesterday - which is why I have Murnau on the brain. Apart from the virtues and vices of our
commentary, the new DVD has much better image quality - it's breath-
taking. The Kino DVD is made from a print struck off the 'export
negative,' which was prepared by Murnau, sometimes using diferent
takes, for US release before he left Germany. This is from the domestic
(ie German) neg, which has detail and gradations of tone that I had
never seen before."

You heard it here first: Another Bill Krohn and David Ehrenstein tag-team commentary for Masters of Cinema. It seems like these two are shaping up to be MoC's resident Ebert & Roeper -- but, of course, completely different, and way better -- like, parallel-universe better. Anyone familiar with David's and Bill's criticism in the L.A. Weekly, Cahiers du cinéma, Trafic, Rouge, or elsewhere will understand that news of this commentary (and the one for 'The Savage Innocents' they've recently completed) is cause for holiday celebration. --

Is this still on schedule?
Any more details to reveal?
Top

20-minute video comparison of the export negative and the (superior) domestic German negative.

still on track for April
Top

What about the 54 minutes docu to be found on the spanish DVD? Are you including it too?
Top

The 54-minute doc's production values aren't that great, and it's all in Spanish.

That's fair enough. I was going to buy it regardless anyway. So, Nick - what are you including on the booklet?
Top

Its nice to see more in-depth video interviews appearing as extras on MOC disks.
I hope this becomes a standard to aim for on most MOC releases in the future. keep up the good work. =D>
Top

godardslave wrote:I hope this becomes a standard to aim for on most MOC releases in the future.

Has the participation of David Ehrenstein on so many MOC releases become another standard to aim for?
Top

I've heard that David's been ripping shit up on Criterion Forum with regard to Bresson and the whole White/Indiana kerfluffle -- and I concur with his and Indiana's position pretty much entirely -- but I'd just like to urge you, or anyone else, not to knock the guy until you've heard the MoC commentaries. David E. is a wind-up artist in the very best sense of the term, and alongside (despite) this manages to lend a sincerity and intelligence -- and sense of humor -- and a perfect sense of bathos -- to his writing on movies that's seldom witnessed in America these days. Seldom seen on Internet forums also. I'm hard-pressed to think of another DVD commentary as perfect as his and Bill Krohn's for 'The Savage Innocents,' and the 'Faust' commentary will come as another cinephilic-critical grand-slam. Just wait for it.
Top

Well, he's certainly been doing something with shit on the board....

I'm willing to wait and evaluate the commentaries on their own merits, though I must confess that the fast and loose way he employs evidence around here gives me pause. I guess what surprises me most is that he's involved in three out of five titles in a row (#22-26) -- for some reason, it reminds me of the way Leonard Maltin keeps dominating Paramount's John Wayne Collection.
Top

I understand and agree with your concerns, tryana. What also concerns me is the way he seems to be such an extreme generalist, writing about all eras of film from all over the world and from underground to mainstream using a hodgepodge of methodologies. It makes it hard (not to say impossible) to have an original, specialized analysis that probes deeply into any one subject. I think this is confirmed not only by the variety of films for which he wrote essays for Criterion in the LD era here but also the fact that most are just mildly thought-provoking appreciations. Admittedly, it's likely that this is what Criterion wanted instead of hard-nosed criticism. (I hope my frankness here won't be taken personally be anyone. I'm not looking to make any enemies.)
My own preference for both essays and commentaries is that rather than having a stable of writers among whom to divide the films being released, a wide variety of critics and scholars are invited to participate including those who have done some of the most provocative and original work on that particular film or its creators. The way the BFI classics books have been done is a good example of this (although maybe that's too much variety -- Camille Paglia?).
Top