Discuss DVDs and Blu-rays released by Eureka/Masters of Cinema and the films on them. If it's got a spine number, it's in here.
Forum rules
Please do not clutter up the threads for MoC titles with information on pre-orders. You can announce the availability of pre-orders in the MoC: Cheapest Prices / Best Places to Buy / Pre-Orders thread. Any posts on pre-orders in any other thread will be deleted.
Post Reply
58 posts
Message
Author 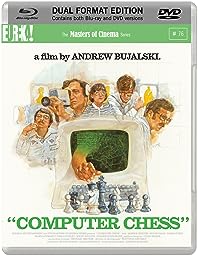 The fourth feature film from the brilliant and maverick American filmmaker Andrew Bujalski, whose previous works include Funny Ha Ha (the early 00s film that arguably kicked-off the so-called "mumblecore" movement of American independent cinema), Mutual Appreciation (an acclaimed comic portrait of love and longing in the Brooklyn indie music scene), and Beeswax (which among its principals starred Alex Karpovsky, the filmmaker and actor who has gone on to renown for his own comedy features and his role in Lena Dunham's Girls).

A boldly intelligent ensemble comedy with a feel and atmosphere that surpass easy comparison, Computer Chess takes place in the early-1980s over the course of a weekend conference where a group of obsessive software programmers have convened to pit their latest refinements in machine-chess and the still-developing field of artificial intelligence (AI) against an assembly of human chess masters. Computer Chess is a portrait not only of the crazy and surreal relationships that come to pass between the abundance of characters who participate in the weekend event (and among whose ranks include Wiley Wiggins, the revered indie-game developer and star of Richard Linklater's classic Dazed and Confused), but of the very era of early computing itself - and of the first, rudimentary video games - and (if that weren't enough) of the hopes and insecurities that persisted through the film's "retro" digital age into the present-day - that semi-virtual, hyper-social, maybe-kind-of-dehumanised landscape that, let's face it, is our very own era. If that still weren't enough: it's also one of the wittiest, most shift-and-cringe-in-your-seat, and entirely LOL-hilarious movies of recent times.

With its radical retro video aesthetic and wry rumination on digitality and where-we-are-today, Computer Chess is a far-reaching and ambitious benchmark for the modern American cinema. The Masters of Cinema Series is proud to present Andrew Bujalski's Computer Chess in its UK home-viewing debut in a Dual Format (Blu-ray + DVD) release.

• 1080p presentation of the feature film on the Blu-ray
• Optional English subtitles for the deaf and hard-of-hearing
• Two trailers for the film
• Andrew Bujalski's short 2013 film Analog Goose
• New and exclusive video interviews with Bujalski, actor Wiley Wiggins, and producer Alex Lipschultz
• 56-PAGE FULL-COLOUR BOOKLET featuring a new essay by Craig Keller; a discussion on retro gaming with Wiley Wiggins; a profile on cover artist (and original Atari 2600 packaging artist) Cliff Spohn; a plethora of full-colour photography from the set; and more!
Top

Out of every contemporary film available, I'm glad this is the one Eureka is distributing and putting on the label (surely on DVD only). I cannot express how much I loved Computer Chess and I'm convinced it's the greatest American film in the last several years. I know Craig Keller loves his low-budget American independents, and I'm glad that if they're going to start releasing any films of that type, that it starts with this.

Though, I wouldn't be opposed to The Unspeakable Act. It channeled the best of 70's French cinema and Dan Salitt's sensitivity to a subject that could've easily have been exploitative makes it feel real, innocent and naive.
Top

Blu-ray and DVD, according to press release.
Top

Computer Chess was apparently shot almost entirely on 40-50 year old video cameras. I've not seen the film; would there be any benefit to a HD release?
Top

EVERYTHING can benefit from Blu release. even SD sources will have less compression and therefore be more transparent to the original source on Blu as opposed to DVD.
Top

True but MoC have been known to put out HD transfers only on DVD because they don't think the difference is large enough - A Man Vanishes and Trouble in Paradise come to kind.
Top

According to the DP this was recorded to Pro-Res files on set. Interesting read:

True but MoC have been known to put out HD transfers only on DVD because they don't think the difference is large enough - A Man Vanishes and Trouble in Paradise come to kind.

Doesn't mean they made the right call *shrug*
Top

The biggest likely benefit will be to their bottom line. All you have to do is visit a few other forums to find that there are collectors now who won't buy anything but Blu. I don't doubt that Blu will be something of an improvement over SD, how much remains to be seen. But I think sales is driving this decision, not technology.
Top

Arguably it could harm sales. Even now people decry the 28 Days Later Blu, when really it's a fine transfer of very poor source elements, and a clear upgrade over the DVD. Still, it looks like shit. If Computer Chess is going to look similar, a lot of less aware customers are going to be pretty shocked when they play the Blu-ray.
Top

SpoilerShow
There is a very brief moment in the movie that's on 16mm and in color. Could this be the reason for the Blu-ray?
Top

Count me in with someone who would always buy the blu when both are offered. If someone is satisfied with the DVD, it is certainly there to be purchased. Anyone buying these sorts of films is hopefully educated enough to understand that just because it's a BD doesn't mean it's going to look like something shot on a 4k Alexa or something.
Top

Though the easiest answer to this would have been if they had just kept with the dual releases.
Top

knives wrote:Though the easiest answer to this would have been if they had just kept with the dual releases.

As a teacher (and as someone presently region locked on Blu) the extra DVD in dual releases have become very essential for me so they are indeed more than just coasters.
Top

One thing I think people often overlook is that while the video may be not be HD, Blu-Ray provides the opportunity to have a lossless soundtrack. I think lossless sound is just as important as the video & is a reason films shot in SD should still be considered for Blu-Ray release (besides the aforementioned compression reason).
Top

I'm guessing this tweet has something to do with the film's packaging...

@mastersofcinema Request: Can anyone out there put us in touch with any of the artists who worked on the original Atari 2600 game cover art?

Someone recommended they get in touch with Cliff Sphon. That would be a great match.
Top

I'm not quite sure what to make of Computer Chess. I found myself alternately thrilled and frustrated by some of its bizarre digressions that never seemed to go anywhere. It often feels like a series of vignettes, some of which are very funny, substituting for characterization. I wish it had spent a little more time with some of the philosophical ideas it swats at. The low-fi cameras really do evoke nostalgia for the era, and I think that's what I most responded too. If this sounds like a pan, it's not. I was engrossed, not by the narrative, but by the seeming search for one, and the film has some of my favorite line readings of the year (go Gerald Peary!). I think the digressions and wonky narrative may have been the point, which may have been somewhat lost on me. I have no idea how to play chess and I don't know anything about programming so I suppose it speaks highly of the film that I enjoyed it as much as I did!
Top

Agreed. Ultimately I didn't see it so much as being about computers or chess but rather about the cast of characters one would find at a hotel in the early 80s. And like you said the use of the low-fi cameras along with the sparse sound design, the editing of the film and excellent costuming really gave it a charm.
Top

Along with Maiko Endo's Kuichisan, easily the most adventurous, ambitious American indie I've seen in years. I had worried that the cameras would be a gimmick that could be briefly marveled at and then forgotten as the film progressed, but their technical quirks and failings actually end up influencing every other aspect of the film, from the editing to the performances to the shape of the narrative. Computer Chess may start off as familiarly nostalgic whimsy, but as its hotel-full of searching minds gets increasingly and inextricably lost in unfamiliar and bizarre corridors of thought, the film turns into a fascinating, frightening, Ruizian whatsit. Indeed, thought itself seems to be the subject of the film, not A.I. or chess, and I'd be hard pressed to name recent films that manage to depict it so beautifully, and complete with the glitches, errors, and crashes that we're all vulnerable to.
Top

It's a nice choice for a contemporary film from Masters of Cinema and one I'm pretty intrigued about, having read some good reviews for it and knowing I'll never have the chance to see this at any of my local cinemas.
Top

Will MoC be able to compete with Kino's slate of extras?

What A Disgrace wrote:• Bonus commentary by an enthusiastic stoner

I didn't know this was an Apatow production!
Top

What A Disgrace wrote:Will MoC be able to compete with Kino's slate of extras?

I'd have thought a documentary with the Deep Blue programmer would have made more sense than a full commentary. The rest of the extras just seem like cheap filler. I suspect MoC will do better.
Top