Discuss DVDs and Blu-rays released by Eureka/Masters of Cinema and the films on them. If it's got a spine number, it's in here.
Forum rules
Please do not clutter up the threads for MoC titles with information on pre-orders. You can announce the availability of pre-orders in the MoC: Cheapest Prices / Best Places to Buy / Pre-Orders thread. Any posts on pre-orders in any other thread will be deleted.
Post Reply
27 posts
Message
Author 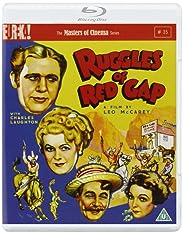 The great Charles Laughton found one of his most iconic roles in Leo McCarey's definitive screen version of Harry Leon Wilson's best-seller Ruggles of Red Gap a wryly humorous tapestry of the American West at the turn of the 20th century.

When the Earl of Burnstead (Roland Young) transfers the services of Ruggles (Laughton), his immaculate English valet, to Egbert Floud (Charlie Ruggles), a wealthy, brash American, the repercussions prove more dramatic than anyone could have anticipated. Relocating to Red Gap, Washington, Ruggles slowly overcomes his disconcertment as he encounters new alliances, enemies, the route to independence, and, possibly, love.

A riotous clash between the Old World and the New, McCarey's legendary comic instincts combine with his customary tender respect to make one of the most glorious and enduring comedies of classical Hollywood. The Masters of Cinema Series is proud to present the UK home viewing première of McCarey's "Best Picture" Oscar-nominated film and for the first time anywhere in the world on Blu-ray.

Great news. Now I'll see if I can get a couple of quid for my French DVD [/optimism].
Top

Any hope of at least extracts from the silent version (with Edward Everett Horton as Ruggles) -- assuming it still exists?
Top

Is there a release date in sight?
Top

Probably May. Wish it were sooner.
Top

For those who care about this sort of thing, this is now spine 35.
Top

Announced for May release. Specs added to the first post.
Top

Additional special features added to first post. (Both this and Island will now include an interview with Laughton biographer Simon Callow.)
Top

Nick, is this going to be the same interview across both discs, or does Callow (excellent choice) go into more detail on each film?
Top

Laughton is fantastic (expected no less) and have to agree with Simon Callow: Roland Young's understated performance as the Earl is brilliant. If the American characters come off as unsurprisingly broad they still solicit sympathy.

I look forward to watching this again. First time viewings of this and Island of Lost Souls in the same month: definitely becoming more of a Laughton fan. Will have to revisit Hobson's Choice.

Just wanted to throw some love at this and encourage folks on the fence--this is a great little comedy!
Top

I really loved it, too. A very funny film with a great cast. Laughton has a wonderful face for comedy. The disc is terrific too; you can imagine it's 1935 and you're watching it in the Regal or Odeon.
Top

This is a gorgeous disc, terrific McCarey too. I really hope more people pick it up.
Top

We watched this for the first time last night and both had a wonderful time. The film's an absolute delight and laugh-out-loud funny. Laughton's idiosyncratic turn is a fascinating curio. His stiff posture and over-active eyes, which have great difficulty looking at other characters directly, almost predicts Supermarionation, but it works because Laughton adapts this peculiar style to the material with wonderful slyness and the overall effect is consistently surprising and funny. And just about every other performance is a delight as well, with McCarey and the actors mining their own personal quirks for surprising comic twists. But what puts this film ahead of other fine screwball comedies of the era is that just about every character and actor also gets to add shades of human warmth - they're not just cogs in the grand comic clockwork.

Highly recommended: a great film an a great disc.
Top

Thanks for the recommendation! I think I am going to pick this one up directly from MoC sooner than later.
Top

This is a great movie, everyone should own this. Don't sleep on it while you still can!
Top

I'd also like to reiterate this - act fast. Still regret not acting sooner on Will Success Spoil Rock Hunter? when that one went OOP...now goes for silly money.
Top

domino harvey wrote:This is a great movie, everyone should own this. Don't sleep on it while you still can!

I wholeheartedly agree. It surprises me that this is under the radar.
Top

Is there a Region A blu for the movie? I'm not set up for Region B.
Top