Haven't seen it yet, even more puzzled as to what that thing is, exactly.
Top

domino harvey wrote: ↑
Thu Sep 20, 2018 3:15 pm
For ease of reference, here are all the acting winners for the last six years (since "five years" may be approximate):

I imagine the candidate is not a recent winner, otherwise the clue would have been "A recent Oscar winner," so that may discount last years' winners at least. Some of these are obviously more likely than others

Didn't the announcement limit it to Best Actor or Actress? Thought I saw that in the article on ThePlaylist.

EDIT: Yes it did.

"Perhaps most interesting, and mysterious, of all is the information that the film will feature a recent (within the last 5 years) Academy Award-winning actor/actress in a lead role."

If she can make it work with her press schedule for Captain Marvel in March, I wouldn't be shocked if it is Brie Larson. I could see Julianne Moore, but can she sing?
Top

Anderson will reportedly be re-teaming with Mark Mothersbaugh for the first time since The Life Aquatic in 2004 to handle the songs in this film.
Top 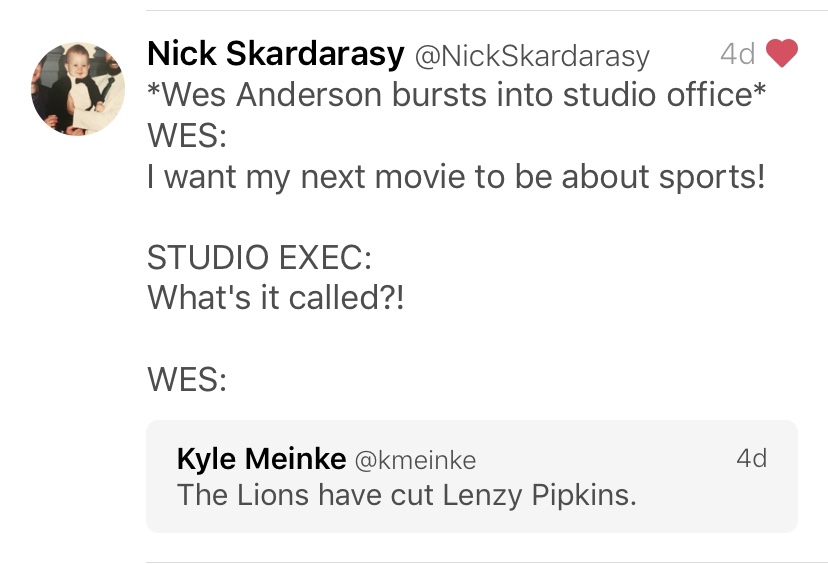 domino harvey wrote: ↑
Fri Nov 16, 2018 7:31 pm
Natalie Portman and Brad Pitt rumored to star-- amusingly Pitt fits the Oscar-winner clue and we all missed it because it was for producing 12 Years a Slave

And The Departed
Top

According to a producer on the film, it's not a musical. Quote:

...It is not a musical ‘but a film set in France at different times [periods]. It’s a story about writers, with connections to Kansas, USA.

Personally I'm very relieved and happy from this news.
Top

I love Anderson so I'm excited for this regardless, but an Anderson-directed musical is such an interesting idea that I wanted to see how it turned out.
Top

I think that Isle of Dogs suffered because, for lack of any better wording, the "passion" of the project wasn't entirely there. I might be overanalyzing or even making a stretch, but I'm still not convinced by Wes having much of a love for dogs, thus the characterization suffered, and then the references to Japanese cinema seemed a bit forced compared to the Ray/Renoir elements in Darjeeling or the '30s films that suffuse Grand Budapest. Wes putting his troupe in France seems almost too logical as a potential "passion" project. (Finally, and redundantly, I tend to think that a good musical requires a few good to great songs and it's always so hit or miss.) Now a Wes Anderson thriller/suspense film...
Top

Put me down as glad this isn't a musical, and even happier that Mark Mothersbaugh is back composing with Wes.
Top

Also glad this isn't a musical! Guessing perhaps there will be original music used in creative ways within the film, but that the characters won't be breaking out into song. I suppose we'll see in due time.
Top

I was really excited to see Anderson apply his style to a musical and for Mothersbaugh to return, but I also admit I wasn't too sure about Mothersbaugh writing a full musical's worth of songs for different voices and styles.

I wonder if this is gonna be a sort of Grand Budapest pastiche of different periods/styles of French cinema? If that's the case, we might get at least one Demy-inspired musical number, so maybe it will still kinda be a musical.
Top

It's titled The French Dispatch, is "a love letter to journalists set at an outpost of an American newspaper in 20th-century Paris", and will star Timothee Chalamet, Benicio Del Toro, and some of the expected Anderson regulars
Top

Chalamet speaks fluent French, FYI, so I imagine he'll get to put that to good use here
Top

I went from slightly bummed (don't like musicals), to relieved, now to overjoyed. At this cast, but mainly the premise of Anderson doing a newspaper movie has me super stoked.
Top

The remainder of that quote describing the film is that it "centers on three storylines." I recall sometime after The Grand Budapest Hotel was released, Anderson said he was working on an anthology project inspired by The Gold of Naples. I wonder if The French Dispatch is what that idea has become.
Top
Post Reply
201 posts