She can still work in Hollywood as a writer, usually as a script doctor. (She's done quite a few films for Nichols.) But it's highly unlikely any studio will take a risk on a senior-aged woman who hasn't directed a film in so long, especially one with her methods. Even a sleek pro like Kathryn Bigelow found it tough to get certain jobs before The Hurt Locker - one TV producer went on-record saying there's no way he would've considered her until The Hurt Locker came along. Not saying it's fair, but that's the business, it sucks.

Also, bear in mind she may have some trepidation directing another feature too. I don't know the history behind her first two films, but the next and last two were hell to deal with. Ishtar is the best-known, but even with Mikey & Nicky, there were lawsuits, a fight with the studio that tried to smear her as crazy and unreliable, and the film was basically dumped. So I wouldn't be surprised if she didn't have any interest or the energy to do another Hollywood film, and given the budgets she's used to and her age, it's doubtful she'll give low-budget indie filmmaking a try. (Not even Elia Kazan or Nick Ray had a happy time with it when they tried at the end of their careers.)
Top

Roger Ryan wrote:Well, she is 81 now. I have no idea if she has attempted to get any further films made, but making appearances at award dinners and museum screenings seems like a fine way to spend one's retirement.

Exactly. To be fair, she's still incredibly sharp and she looks really good for 81, I was surprised.

FWIW, sometimes you get the impression that cinephiles view their favorites like they were superhuman, and that's understandable. I get that idea about great filmmakers too: "Just give them the budget, the opportunity, and they'll knock it out of the park."

But talking openly to filmmakers in private, whether it's indie or big-budget, documentary or narrative, you really understand how shitty and difficult it is just to make any movie. It takes a lot out of you, whether it's the process, the politics or the business, or the distribution...so sometimes I think asking these people "why don't you make another movie?" is like asking "why don't you climb Mt. Everest again? You've done it before, so why not give it another shot now that you're more worn down?"
Top

That is one of the truest things I've read lately.

Coming from someone who had a go picture, even at a pretty small budget level fall apart on me just a couple months from shooting. All you can do is take a bit of time to get your head straight then put on your climbing gear and set out on the next trek...
Top

You guys all make valid comments on her age, filmmaking in general, but keep in mind May was going strong through the 1980s and after Ishtar, 1987, she never directed another feature. She was much more vibrant and energetic I'm assuming 25 years ago and yet never was either afforded the opportunity to helm a film or didn't want to and I think its a shame either way.
Top

She only got to do Ishtar due to Beatty's intense efforts and championing. She really only had one commercial success with The Heartbreak Kid, so the studios were already done with her after Her last film. There's a lot about this in the book about Puttnam running Columbia.
Top 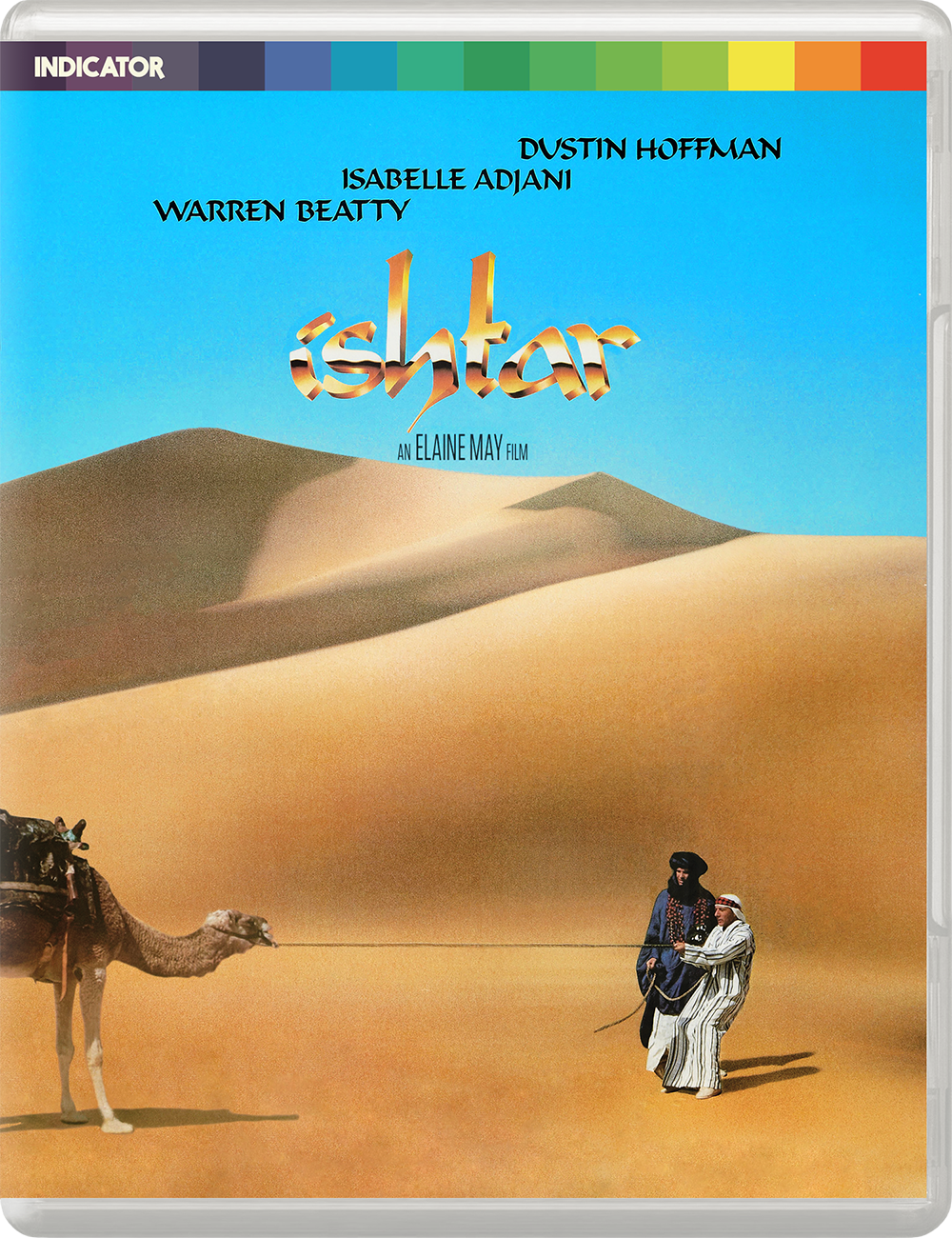 Hope it includes the original theatrical cut and the revisionist version May put out on the Sony Blu-Ray.
Top

I watched the 'director's cut' (though having never seen the film before, I don't know what the differences are) and mostly loved it. I'm fully aware that this is aided by the majority of a lifetime of anticipation having grown up on May's classic masterpieces, as well as tempered by its rough rep. Knowing little about it helped, as the Hoffman/Beatty dynamic transformed typical buddy-comedy into classic screwball, and even when colder drafts began to blow in between gags their screen presence and the situational humor of the outrageous predicament kept me engaged. I agree with others that the first half hour or so is just stellar and the rest can't live up to it (the suicidal gesture scene had me dying) but I admired the commitment to scope and I appreciated how May sought and capitalized on an eclectic vision rather than stay in the safe territory of her comfort zone.

This film seemed to have paved the way for other two-act mood shifts that have been better received. I was most reminded most of Pineapple Express, which I always thought was purposefully structured to reflect the audience's experience of being stoned, with the first half being a giggle-fest of sharp, witty jokes, followed by the hazy crash of confusion bleeding into mindless action, and a drawn out finale of utter nonsense as the crash solidifies. But this film did it first, and better. Maybe if this was made today it would be celebrated for its tonal route as reflective of its strengths instead of weaknesses.
Top

I suppose I’m one of the few who prefers the Morocco segments for their tonal bravery — as you said, TWBB, the New York stuff is funny but also feels a little safe for May. (Not necessarily a problem...) The disembodied voice that repeats “a military curfew is in effect throughout Ishtar” alone feels like her trying something new and exciting: it’s really unnerving in a way her past comedy hasn’t been. At the risk of turning this into a post just listing my favorite gags throughout, the whole “song request” scene in Morocco never fails to send me into fits.

And the songs! The songs! I pray that Indicator can resurrect the unreleased Rogers & Clarke album somehow as a bonus feature.
Top

I also love the Morocco scenes, though I think this is a near perfect film so my bad taste may be just showing off again.
Top

As a lover of the convoluted comedy-adventure 'wrong (or inept) man' picture, the Morocco sections work for me too, swaying from enjoyment of creative oil-and-vinegar insanity to the simple pleasures of this film's most classic ingredient in unexpected narrative beats. Even scenes like Beatty stepping out of character to go on the offensive against the 'intruder' works because it's silly and takes a sharp left turn at once. These segments are at their best when May keeps Beatty and Hoffman apart for a scene then has them re-integrate, and that back-and-forth as each takes on new roles, information, experience, and then either shares or doesn't with the other (or surprises them with a blind animal) is always funny. The comedy of withholding a potential gag from being shared becomes an entirely different form of realised potential, and a fresh gag that they can play off of beautifully. The first half hour is just nonstop comedy, but after establishing that collaborative dynamic, May breaks down and re-constructs it which is arguably more impressive.
Top

Have there been any updates on Indicator releasing this?
Top

allyouzombies wrote: ↑
Tue Apr 06, 2021 1:48 pm
Have there been any updates on Indicator releasing this?

I think it was posted somewhere that's it coming later this year. There just hasn't been any official postings about it lately.
Top

Happening today, if the Powerhouse website banner is any indication. I’m thrilled!
Top

Once the byword for expensive Hollywood failure, Ishtar is slowly – and rightfully – becoming recognised as one of the unsung greats of eighties' American cinema. In a nod to Bob Hope and Bing Crosby Road to… movies, Warren Beatty (Mickey One) and Dustin Hoffman (Straw Dogs) star as brilliantly awful songwriters who find themselves mixed up in Cold War shenanigans whilst in Morocco. Another comedy gem from Elaine May’s sadly small, but utterly perfect directorial career.

Very excited to see Waiting For Ishtar as an extra - it's been M.I.A. for a few years and I've heard good things.
Top

Is there consensus on which of the two cuts is superior/better for first-time viewers?
Top

As I understand it, the cuts are very, very minor - a few lines of dialogue in the New York section and one in the Morocco half. I would go with the theatrical cut myself, but I'm not sure a consensus exists on which is better.
Top

This is very exciting. Since there are more extras to be announced I would love for some May and Nichols comedy bits as extras. There’s tons floating around and they’re clearly an influence on the film’s approach to being buddies.
Top

knives wrote: ↑
Thu Apr 15, 2021 5:26 pm
This is very exciting. Since there are more extras to be announced I would love for some May and Nichols comedy bits as extras. There’s tons floating around and they’re clearly an influence on the film’s approach to being buddies.


There was a relatively brief, but very well made documentary on them that PBS produced around the time The Birdcage was released. It has clips of their television appearances and interviews with people like Robin Williams. I really hope that appears on a disc of one of their films in the near future.
Top

Would that be Nichols and May: Take Two?
Top

Elaine May and Mike Nichols in Conversation (2006)

This is highly entertaining to read - the transcript's online - but it's pretty awesome that they got a video recording of it.
Top

Though this has the benefit of not including The Fortune.
Top

Ribs wrote:The exact same conversation is available on the Indicator release of The Fortune

...which was put together before we knew we’d be handling Ishtar. Had we known at the time, we’d have saved it exclusively for Ishtar, but since it’s overwhelmingly about Ishtar it seemed perverse not to include it.

See also the duplication across The Criminal Code and Convicted (in Columbia Noir #3) of a featurette comparing the two (they were based on the same stage play). There was no particular reason for favouring one over the other, and no reason to assume that purchasers of one would also buy the other, so including it on both made sense.

This sort of thing is very rare - in fact, I can’t think of another example in the Indicator catalogue - but in those two cases it’s clearly justifiable.
Top
Post Reply
79 posts