I was reading the latest issue of Cinema Retro and it mentions there’s a six-film Takeshi Kitano set coming from Arrow. This has to be a mistake right? I can’t see this being right especially as I don’t think Arrow has touched any Shochiku films and that they already publish all the Third Window titles in the UK.
Top

They could do a US-only set of the Third Window titles like they did for Tsukamoto. In fact, there are exactly six of them:

A Scene at the Sea
Getting Any?
Kids Return
Hana-bi
Kikujiro
Dolls
Top

The Elegant Dandy Fop wrote: ↑
Tue Jun 22, 2021 4:54 pm
I was reading the latest issue of Cinema Retro and it mentions there’s a six-film Takeshi Kitano set coming from Arrow. This has to be a mistake right? I can’t see this being right especially as I don’t think Arrow has touched any Shochiku films and that they already publish all the Third Window titles in the UK.

I suppose Third Window might have lost the rights? Obviously there are six they released - A Scene at the Sea, Getting Any?, Kids Return, Hana-bi, Kikujiro, Dolls - which seem the most likely if Arrow were looking to get some. I'd be tempted to double-dip but only if they added some more extras. That's if it turns out to be true.

Could also be that it's US-only, but Film Movement released Hana-bi a few years back so not sure if that might prevent such a thing or not.
Top

To the best of my knowledge, these Kitano films haven't been released in the UK:
Outrage Coda
Ryuzo and the Seven Henchmen
Beyond Outrage
Achilles and the Tortoise
Glory to the Filmmaker!
Takeshis'
Brother

And these haven't been released in the US:
Ryuzo and the Seven Henchmen
Achilles and the Tortoise
Glory to the Filmmaker!
Takeshis'
Dolls
Brother (Sony)
Kikujiro (Sony)
Kids Return
Getting Any?
Sonatine (Miramax)
A Scene at the Sea
Top

Clue for one of Friday's announcements...

most seem to feel the graphic hints at The Frighteners, a UHD we know is in the works.

apparently the pic is a stock photo of zombies in an abandoned building. Pupi Avati's Zeder? Nacho Cerda's The Abandoned?
Top

Maybe a Fulci 4k? Is there a 4k master of The Beyond?
Top

Someone needs to rescue that film. It’s been botched every time on Blu ray.

Maybe the blank eyes are the giveaway to The Beyond?

Then again, The Sentinel?
Top

IIRC, Simon Pegg loves The Sentinel - I'm sure he chose it as a Guilty Pleasure for a Mark Kermode in 3D.
Top

Has The Frighteners been confirmed for UHD? James Flower tweeted recently about working on an upcoming Arrow release that people were aware of and assumed was going to be UHD but won't be; for some reason my mind jumped to The Frighteners. There are a couple of 'F's on Fran's handwritten list but none with UHD.
Top

I'm pretty sure the James Flower tweet was referring to 'Legend'. Fran Simeoni has already said that The Freighteners has been delayed due to restoration issues IIRC.
Top

It isn't The Beyond, that is with Shameless in the UK and Grindhouse in the US (who are rumored to be working on a new restoration.)
Top

Watch it be a shitty roundabout clue for White of the Eye on 4K.
Top

I picture already people's reactions to this very specific photography like they did with the BD...
Unlikely though (joke aside), I recall Francesco Simeoni telling me this was one of their (then) worst selling title.
Top

These have been found on Amazon:
The Children of the Corn boxset will only have the first film as a 4K UHD, and the Olivier Assayas boxset is just a re-release of the previously released films with no new booklet or extras.

So, what was the title that the zombies / abandoned building was a clue to?

Also, interesting, there’s mention of a title that ppl assumed was getting a uhd - could this be Legend?
Top

The clue probably referred to Zombies of Mora Tau.
Top

That seems to be the case. James Flower explained the rationale in detail on Twitter. Tl;dr seems to be that it comes down to the quality of extant elements, and Fox/Disney owning the 93m international cut, which the negative is conformed to.
Top 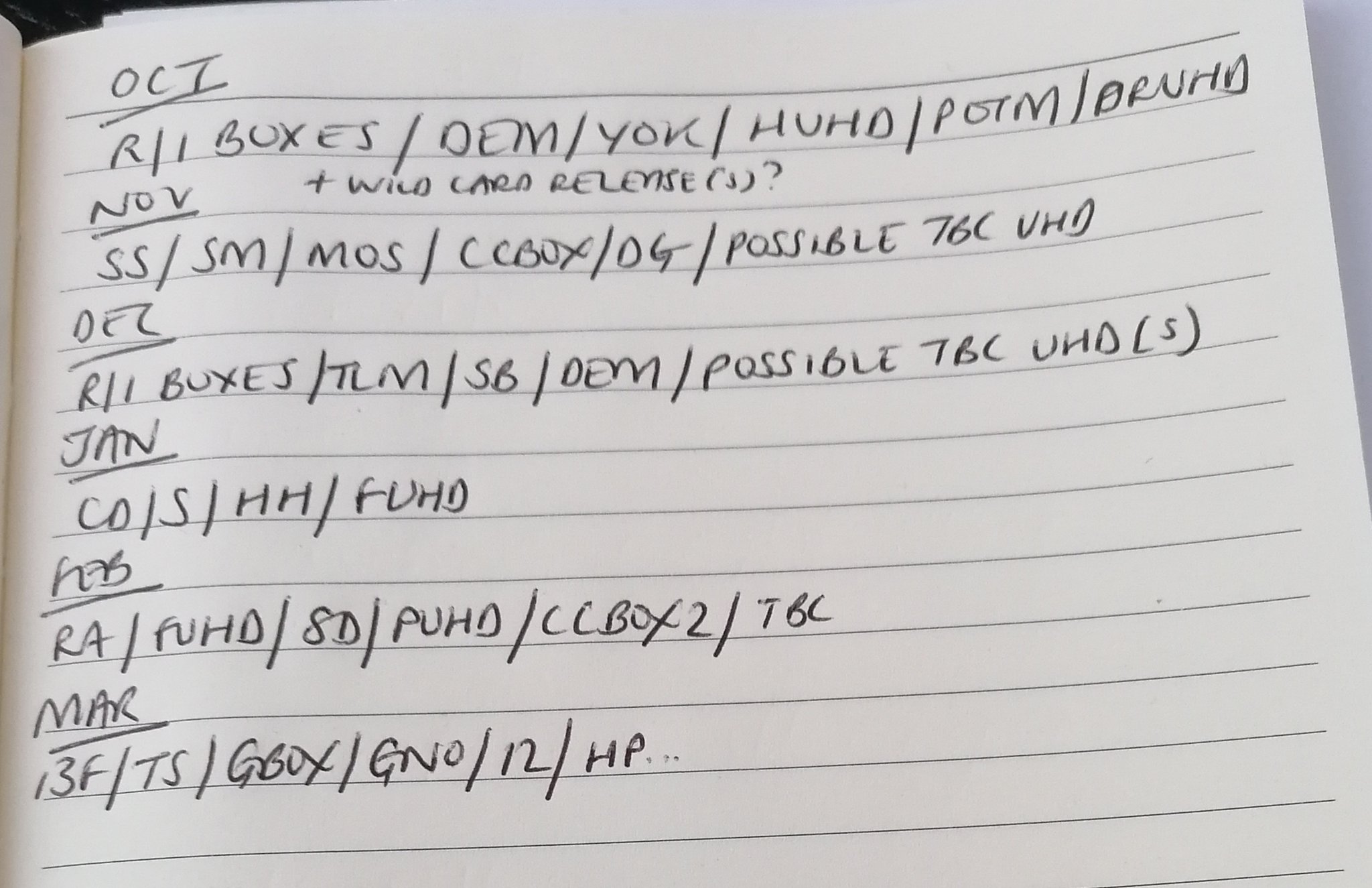 Fran Simeoni cleared up the "R/I Boxes" are re-issue boxes (along the lines of the Martino ans Assayas boxes, I assume.)
Top

I'd thought it's a complete placeholder and was To Be Confirmed.

I suppose the Oct YOK is the Yokai boxset.

I can’t think of another CC that would warrant a second box just a few months later, fingers crossed!
Top
Post Reply
1957 posts