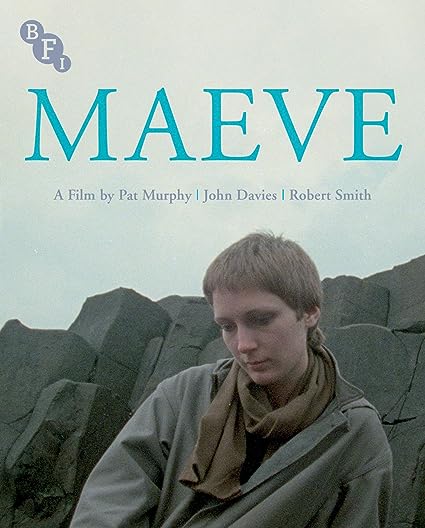 Memories of a childhood shaped by the spectre of sectarianism come to the fore, as Maeve (Mary Jackson) returns as an adult to a Belfast still steeped in the politics of The Troubles.

Presenting a feminist alternative to the conventional narrative of the conflict, filmmakers Pat Murphy and John Davis broke new ground with their experimental approach, which challenges many of the formal qualities of mainstream cinema.

Previously unavailable on Blu-ray, Maeve is a powerful take on the issues of feminism and nationalism, a film rich in debate and disruption and an overlooked gem of 1980s independent film, ripe for rediscovery.

• Remastered in 2K by the BFI

• Being a Woman is a Nationality – a Video Essay on Maeve (2021, 14 mins): filmmaker Chris O’Neill explores Maeve's themes of feminism, republicanism and nationality in this new video essay

• Irish Cinema - Ourselves Alone? (1996, 51 mins): Why have the most enduring celluloid images of Ireland been made by foreign filmmakers? That's the core of this documentary by Donald Taylor Black - showing the struggle of Irish people to create an Irish cinema. Featuring interviews with major figures including Neil Jordan, Bob Quinn, Jim Sheridan, Pat Murphy and Roddy Doyle

• Limited edition with a booklet featuring a new discussion on the film between Pat Murphy, John Davies and Robert Smith

This is the most exciting BFI announcement in quite some time and it's great to see that they've also saw fit to include an episode of their Century of Cinema series in the extras. I first discovered Maeve through a BFI list of 10 great films about the Troubles and it lives up to that write-up. I hope that the release helps it gain a wider audience, though I'm not sure the cover art is going to do it any favours on that front.

Pat Murphy's next feature, Anne Devlin, has recently been restored as well so hopefully a release of that will follow before too long.
Top

Really nice to see Irish Cinema - Ourselves Alone? getting a disc release. That was another one of the series of BFI produced films in the Century of Cinema series. The most famous was A Personal Journey Through American Cinema With Martin Scorsese, but there was also Typically British by Stephen Frears (which appears on the BFI disc of My Beautiful Laundrette), the Sam Neill presented Cinema of Unease about New Zealand, and Godard's 2 x 50 Years of French Cinema, amongst others.

The airing of Irish Cinema - Ourselves Alone? on Channel 4 back in 1996 had the film High Boot Benny accompanying it.
Top

The Polish entry in that series, Paweł Łoziński's 100 Years in the Cinema (100 lat w kinie) is included in the 100% English-friendly DVD compilation of Łoziński's work put out by Poland's National Audiovisual Institute.

(It was originally billed as being by Krzysztof Kieślowski, and I assume the plan was for Kieślowski to have rather more input, but his early death meant that the final film is largely Łoziński's work.)
Top

That also makes sense with the television screenings at the time too, since Channel 4 premiered the whole of the Three Colours trilogy, and specifically repeated A Short Film About Love, surrounding their broadcast of the 100 Years in the Cinema episode.

It is a bit nerdy yet interesting to note the pan over the film cans in the little Channel 4 ident that accompanied the film series specifically names Kieślowski too amongst the other directors who made entries in the series, but then again that pan also notes "China: Shu Kei" when the actual documentary on China for the series was directed by Stanley Kwan! Maybe there was going to be a mainland/Hong Kong split into two documentaries at one point? Or maybe I am just reading far too much into a pan across a few names (that were subject to change) used to introduce a film series!
Top

Shu was originally tapped to direct the China installment instead of Kwan. I don't know what happened with Shu, but my guess is one of his other projects got in the way, possibly Hu-Du-Men. If you look closely at the ident, you'll also notice that the Russia/CIS entry is credited to "Nikita" (as in Mikhalkov) rather than Sergey Selyanov, who ended up actually doing it. Bertolucci was to do the Italian episode, but his work on Stealing Beauty put paid to that, with the result that Italy was conspicuously unrepresented—though Scorsese's My Voyage to Italy was apparently meant in part as an unofficial corrective, and was included with the German DVD release of the series. An African installment by Jean-Pierre Bekolo (Aristole's Plot) was actually produced but cut loose from the series, supposedly because it strayed too far from the assignment; it's available on Bekolo's Vimeo account.
Top

That is very interesting Fanciful Norwegian, I had been wondering what happened to Italy! Channel 4 did screen Mikhalkov's Urga (Close To Eden) as the tie in film to that Russian episode, so they were probably talking as much about the films they were showing as the documentaries, and maybe they synced up less and less often as things progressed and directors changed.

The Century of Cinema series did end up airing on Channel 4 over a number of years. The Scorsese film aired in July 1995 with the Frears film airing in October that year, both tied in with major film seasons (the US one was the most extensive, running for months and showing premieres and only showings to date of both Last Temptation of Christ and John Ford's The Iron Horse. The UK season was a bit more subdued with a film showing on Saturday evening each week for a month). Then the majority of the rest of the films aired late night throughout 1996 with often just a single associated tie-in film screening. The exception being the Polish episode which had both Three Colours and A Short Film About Love.

There was quite a break, of over a year, before the last three episodes aired on Channel 4 in 1997, quite a long while after the official centenary of cinema had passed. It is interesting to hear that Aristotle's Plot was cut loose from the BFI series, as Channel 4 treated that as just another episode of the series, and it was the other exception to match Poland in screening two films in Djibril Diop Mambéty's Hyenas and Ousmane Sembene's Guelwaar surrounding the episode.

Though that African cinema episode was not the last film in the series shown, as the episode on India: And The Show Goes On came the week after along with a screening of Bandit Queen; followed finally by George Miller's Australian entry The Years of Dreaming in late 1997, which tied in with the premiere of The Adventures of Priscilla, Queen of the Desert!
Last edited by colinr0380 on Mon May 03, 2021 7:40 am, edited 1 time in total.
Top

Pre-order/order from the BFI Shop here.

Previously unavailable, Maeve is a powerful take on feminism and nationalism, rich in debate and disruption, and an overlooked gem of 1980s independent film that’s ripe for rediscovery.

Newly remastered in 2K by the BFI, it is released on Blu-ray on 17 May in a Limited Edition. Extra features include a new video essay exploring the themes of Maeve and a 1996 documentary featuring major Irish film talent that asks why the most enduring images of Ireland have been made by foreign filmmakers.

Memories of a childhood shaped by sectarianism come to the fore as Maeve (Mary Jackson) returns to a Belfast still steeped in the politics of the Troubles.

Presenting a feminist alternative to the conventional narrative of the conflict, filmmakers Pat Murphy, John Davies and Robert Smith broke new ground in 1981 with their experimental approach, which challenges many of the formal qualities of mainstream cinema.

Special features
• Remastered in 2K by the BFI
• Being a Woman is a Nationality: A Video Essay on Maeve (2021, 14 mins): filmmaker Chris O’Neill explores Maeve’s themes of feminism, Republicanism and nationality in this new video essay
• Irish Cinema – Ourselves Alone? (1996, 51 mins): documentary by Donald Taylor Black asking why the most enduring images of Ireland have been made by foreign filmmakers, and showing the struggle to create an Irish cinema. Featuring interviews with major figures including Neil Jordan, Bob Quinn, Jim Sheridan, Pat Murphy and Roddy Doyle
• Limited edition with a booklet featuring a new discussion on the film between Pat Murphy, John Davies and Robert Smith and essays by Lizzie Borden, Emmie McFadden and Jack O’Dwyer