colinr0380 wrote:prepared to commit to the ' throwing yourself in at the deep end' opportunities to work . . . in Canada

I'm curious: what did he film in Canada?
Top

david hare wrote:Am I the only person who didn't get (let alone like) Fille coupee a Deux?

Wait a tic, I thought I was the only one who really liked it!

R.I.P. La cérémonie is one of the best movies ever made and hopefully he'll continue his prolific career wherever he goes.
Top

How sad for us there won't be a new Claude Chabrol film every year. He was a refined and sophisticated storyteller who always appealed to the intelligence of his audience. Once you become attuned to Chabrol's style, his films are emotionally gripping. I've made quite a study of his work over the years. I have all the available DVDs. I wish the transfers were better quality on most of them. I find it interesting that his career started with, and was sustained by, private money. He got to make the films he wanted in the way he wanted because there was no committee telling him what to do or judging the value of him. If Chabrol had been dependent on the Horowitz organization in Beverly Hills, for example, he would never have had a career in the first place.

Richard--W wrote:I find it interesting that his career started with, and was sustained by, private money.

Jean Renoir was the same (or very similar), as I recall- he funded his first films by selling his dad's paintings, but he always kept the empty frame to remind him of what he'd sacrificed for his career.
Top

domino harvey wrote:PIcked up the Canadian disc of Bellamy off eBay...I wouldn't hold my breath for an American release, especially in this market.

The new IFC release has a solid transfer and includes an hour-long making-of feature that's worth the price of admission by itself.
Top

Sweet, thanks for the heads-up. I had no idea it was getting a stateside DVD release!
Top

Pathfinder released two Chabrol films in March, one for the first time anywhere subbed-- the Twist and Just Before Nightfall
Top

For completists only perhaps but Quiet Days in Clichy is out on blu
http://www.amazon.fr/Jours-tranquilles- ... 3&sr=1-237" onclick="window.open(this.href);return false;
Top

There's a book-length collection of interviews conducted with Chabrol shortly before his death that sounds absolutely amazing, for the French speakers among us. Here's a translated review from the Cahiers blog
Top

domino harvey wrote:Knives, you should wax color in the Chabrol thread, we could use some new blood

Okay, though I'm afraid I don't have much to offer. Thus far I've basically been limited to the Kino set and Cry of the Owl so it's been hard to see any colours beyond brown, black, and the occasional red so you can only imagine the level I was stunned by the clean print of The Ceremony which makes me all the more wish his films would get better editions. What really is interesting about this use of colour is that it's not any sort of colour coding and not really used for emotional explanation as most uses of colour are. It's fairly close to that later thing, but the difference is the lack of highlight and connection to emotion. It was almost Kubrickian, but dependent on light rather than actually accentuation if that makes sense.

The most shocking use of this is the climax where I don't think anything changed so I believe this was caused only by lighting, but the whites are so strongly highlighted as to give it a nastier and more disturbing edge. By nothing being actually changed to the best of my knowledge (it would be a wonderfully smart assed move if he did replicate the set in white) everything becomes grounded to the past, but instead of bringing reality or calm to the scene it makes all the past scenes creepier and more disturbing. Each flash of the muzzle is like watching the whole film again and while this would come across even if the transfer looked as much like shit as Chabrol's other available movies we'd get that. The difference here is that it makes for more specific recollections.

What I was immediately reminded of with that climax was the use of green throughout (it's really more of a blue, but green seems to be the emotion) that's rather invisible throughout so I may be making this up, but the colour haunts the film like a ghost and seems to be like the teevee a symbol of Bonnaire's past. The colour in memory becomes like a bacteria eating away at the film. I'm sure when I see it again and am looking for the colours more closely I'll be more eloquent and thought out, but here's my first impressions I guess.
Top

Am I misremembering, or was The Cry of the Owl unavailable on Netflix and fetching high prices on amazon for a while there? If so, that's no longer the case. Looking forward to seeing Chabrol tackle Highsmith.
Top

Hopscotch wrote:Am I misremembering, or was The Cry of the Owl unavailable on Netflix and fetching high prices on amazon for a while there? If so, that's no longer the case. Looking forward to seeing Chabrol tackle Highsmith.

Netflix is streaming Jamie Thraves' version of The Cry of the Owl right now, not Chabrol's.
Top

I'm not talking about the Thraves version or streaming. The Chabrol version is available on disc, whereas if I recall correctly it was previously unavailable.
Top

You can get it for $5 plus shipping here. You can also get the Epstein Fall of the House of Usher there for $5, which is way less disappointing PQ-wise.
Top

It's always been available
Top

This is surely due to the fact that, STILL, there are hardly any Chabrol BDs, and most DVDs of his pre-90s work look horrific!!

Somebody, anybody, please - get these films some much needed HD!!
Top

Of all the titles to upgrade from the Kimstim collection, those are the ones?!
Top

I wonder if they're going to split up the films since I really am not interested in double dipping the first one.
Top

How many French schoolteachers do I have to stalk to get a proper release of Le Boucher? Anyone have any idea who has the blu-ray rights?
Top

Aspect wrote:How many French schoolteachers do I have to stalk to get a proper release of Le Boucher? 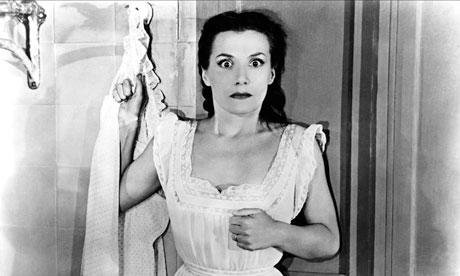 Oh, I don't care about Le Boucher! But everything surrounding it - his entire 60s, 70s and 80s output (except for the two aforementioned Detective films) - are in dire need of restoration!!
Top
Post Reply
135 posts