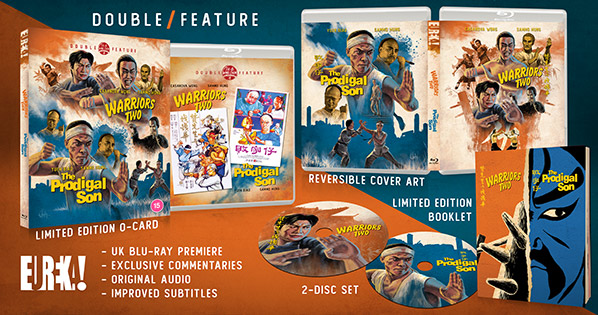 Two Hong Kong action classics from Sammo Hung, Warriors Two and Prodigal Son both depict a version of the real-life kung fu master Leung Jan, whose mastery of Wing Chun would make him a legend.

In Warriors Two, Sammo Hung and Casanova Wong play two students of master Jan (played here by Bryan “Beardy” Leung) who must use their skills to defend their town against an evil businessman and his gang of killers.

The Prodigal Son follows Leung Jan as a younger man (played by Yuen Biao). Lazy and spoilt, he believes himself to be a great kung fu master not realising that his father has been bribing his opponents to intentionally lose. After being humbled in a real fight, Leung Jan decides to become a real Wing Chun master!

Featuring some of Sammo Hung’s most memorable action choreography, Warriors Two and The Prodigal Son are not to be missed and make their UK debuts on Blu-ray from brand new 2K restorations!

£13.50 per film is very fair; I don't understand the bitching by some on the other forum. I've seen neither before but felt very comfortable blind buying this set. Eureka have been on a fantastic roll with their Hongkong titles this year and in 2020. 2022 looks like more of the same. I only wish Kung Fu Bob was doing their covers instead of Darren Wheeling but Bob is evidently busy with the 88 Films commissions.
Top

By some, you mean Grim Tales right? He's a ninny.
Top

Prodigal Son is an absolute pinnacle of fight choregraphy, and it's married to one of Sammo's best overall story/directorial efforts. It has Lam Ching-Ying in probably his best role and deftly splits between hard edged fighting and comedy. The tone shifts constantly, but in line with the story's development and the lead's growing awareness. Along with Pedicab Driver I'd say it's Sammo's best movie.

Warriors Two is not on the same level, but it pairs well as it's his other authentic Wing Chun movie. Casanova Wong is a good-looking dude and he can fight, but he's just not a leading man. Sammo mugs a lot. Beardy's always great, the training sequences are good, Lee Hoi San is a plus. I can't remember much plot, at one point Sammo hides behind a door? The final fight, though, is really memorable, because Fung Hak-on does a cartoon version of his excellent Mantis style while sporting an Eddie Munster wig.

I always get Warriors Two mixed up with The Odd Couple. That movie's fantastic.
Top
Post Reply
5 posts • Page 1 of 1

Return to “Masters of Cinema Rumours and News”