Discuss DVDs and Blu-rays released by Criterion and the films on them. If it's got a spine number, it's in here. Threads may contain spoilers.
Post Reply
16 posts • Page 1 of 1
Message
Author 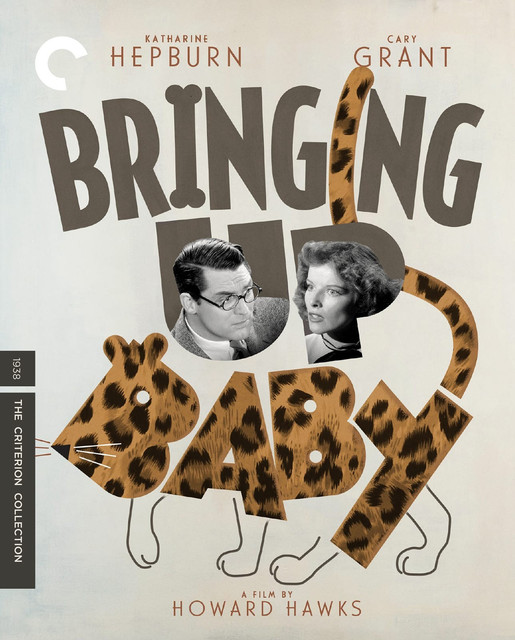 Screwball sparks fly when Cary Grant and Katharine Hepburn let loose in one of the fastest and funniest films ever made—a high-wire act of invention that took American screen comedy to new heights of absurdity. Hoping to procure a million-dollar endowment from a wealthy society matron for his museum, a hapless paleontologist (Grant) finds himself entangled with a dizzy heiress (Hepburn) as the manic misadventures pile up—a missing dinosaur bone, a leopard on the loose, and plenty of gender-bending mayhem among them. Bringing Up Baby’s sophisticated dialogue, spontaneous performances, and giddy innuendo come together in a whirlwind of comic chaos captured with lightning-in-a-bottle brio by director Howard Hawks.

Those crazy bastards they actually did it.
Top

It seems like someone at Criterion might have heard this forum's complaint about the lack of actor/technician-centred bonus features on their classic Hollywood releases.
Top

Really disappointed that Katherine Hepburn's doc about herself, Katherine Hepburn: All About Me, didn't make the cut, as I believe WB included it on one of the relevant DVDs and this seemed the last big place it might appear. It plays on TCM all the time and I've watched it repeatedly, I find it extremely entertaining. Still obviously wonderful this has finally, finally, finally appeared, 15 years after the format debuted.
Top

Could they be saving it for another Hepburn release? This seems pretty loaded
Top

I guess it’s possible they’re doing Adam’s Rib as that despite being ostensibly the best one it weirdly hasn’t appeared even though WAC was diving deep on the Hepburn/Tracy releases, I just for whatever reason in my head had thought of this as the natural pair for that feature.
Top

Nice way to close out our Cary Grant list.
Top

I'm sure the Hepburn doc is generally good, but the first thing it brings to mind is Werner Herzog. When he released his film manifesto, it conspicuously stated "And don’t you listen to the Song of Life." Someone asked him about it and he said it was a direct response to that moment in the doc - after clarifying that he really likes Hepburn as an actress, he expressed disappointment in her tendency for "vanilla ice cream" philosophy, and after seeing the doc, it became a running joke between him and someone else where they'd tell each other "don’t you listen to the Song of Life."

Regardless, I love this film - I figured it would get a BD release, but this sure took a LONG time. I last saw it at BAM like eight years ago, thinking a release was imminent.
Top

FINALLY! TCM runs this in HD, and I knew from Vudu that there was an HD master.

Now can we ever get The Thief of Baghdad in HD?
Top

after I watched the marvelous criterion bluray of Philadelphia Story, I wound up rewatching my old WB dvd of Bringing up Baby, and was stunned at how poor the quality now seemed. When the DVD came out I remember I was blown away at how much better it was than the VHS/TCM, but now it looks rather shabby. Can't wait to upgrade this.
Top

Same here about the DVD quality, so I can't wait to see this.
Top

The Warner DVD also has a small but jarring cut at 1:31:40, omitting Susan's line that Jerry "knocks my block off" if she doesn't go where he goes.

This leaves ADAM'S RIB as the only one of the seven "comedies of remarriage" discussed at length in Stanley Cavell's book Pursuits of Happiness that Criterion hasn't released...
Top

Fucking finally!!!! The Lady Eve, Twentieth Century and now this?! Wow, the last couple years have been great for us screwball fans, not to mention that I can finally cross off another title from my blu-ray wishlist. I had a feeling Criterion would end up releasing it considering their Hawks output and relationship with Warner Bros. I'm not surprised this took so long to come out as the restoration must have been a massive undertaking and those take time and money especially for problematic titles like this one. This may end up being a title, like Philadelphia Story, where Criterion created a master from a source outside of whatever holdings Warner had. It’ll be interesting to see when the “about the transfer” notes come out what the actual source element used was. Bringing Up Baby looked terrible on the dvd and much like the recent The Thing from Another World, is part of the RKO library. Those films are notorious for being compromised, being in poor condition or having film element problems. Surely, this restoration will be a revelation. Here's hoping Criterion can work their magic on other problematic RKO titles like Freaks and the final Cary Grant and Hepburn collaboration yet to be released, Sylvia Scarlett (a film I haven't seen, but that certainly looks interesting with its ahead of its time sexual politics). With Bring Up Baby finally released, there's only two Grant comedies left that I want released: the underrated My Favorite Wife (here's hoping Criterion releases it, but I see it as more of a Warner Archive title) and Arsenic and Old Lace (I could definitely see Criterion releasing this one), I don't particularly care for The talk of the town.
Oh and just because I have to complain about something, as per usual with Criterion the commissioned cover is terrible.
Top