Not a fan of K-Pop at all (I think the only music I've ever seen out of South Korea was Gangnam Style like everyone else) but I know people who are. The K-Pop "scene" is absolutely awful. Imagine every abuse you can think of and the executives do it. Theft of wages, forced prostitution, propaganda, you name it. I am unfortunately not shocked this has transpired and it saddens me deeply.
Top

Heather North at 71. I imagine a vast majority of you will recognize her as the voice of Daphne from Scooby-Doo.
Top

Dick Enberg was in my top 3 all time favorite announcers. He was so smooth and never superfluous in his calls. It didn't matter what he was calling either. He will be missed.
Top

For years, I’d eagerly get up like it was Christmas morning to hear him call Wimbledon...
Top

bearcuborg, Enberg even did this.... Sports Challenge. This was a great show. Loved watching this as a kid.
Top

FrauBlucher wrote:bearcuborg, Enberg even did this.... Sports Challenge. This was a great show. Loved watching this as a kid.

Thanks, I wasn’t aware of this! I’m also younger. My favorite sports show as a kid was Sportswriters on TV. I grew up in Chicago...
Top

Composer Dominic Frontiere, who is probably best remembered for his wonderful work on the 1960s Outer Limits television series. He was 86.
Top

Franco's daughter is at her last hours and the Civil War has come back, twitter way.

Imagine Hitler's family or Stalin's or whoever, living in their own country they ruled.
Brown-nosed by part of society, Granted by a Dukedom by the King, Grandee of Spain, enjoying the wealth they accumulate during Franco's power, with Looted art, gifted Castles, billions of euros hidden, Bishops crying.

120.000 Republicans killed by Franco's are still TODAY under the land in the sideways of any roads.

Chevy Chase should do a cameo on the next available Weekend Update. It would make a nice bookend.
Top 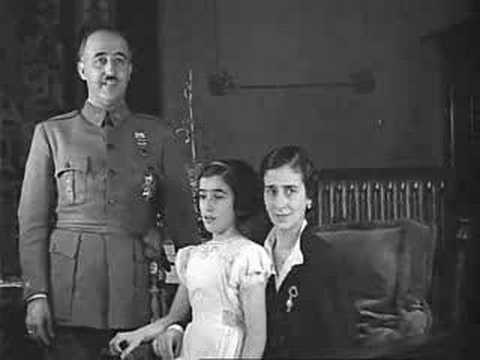 Famous image from newsreel when little Carmen wished Merry Xmas to German kids and she blessed all them (Legion Condor)
Now is official, the witch's dead.
Top

We all owe that man a debt of gratitude. Especially New Yorkers...
Top