Oedipax wrote:I liked this movie. I find it hard to believe Larry King's the best they could do for a blurb. 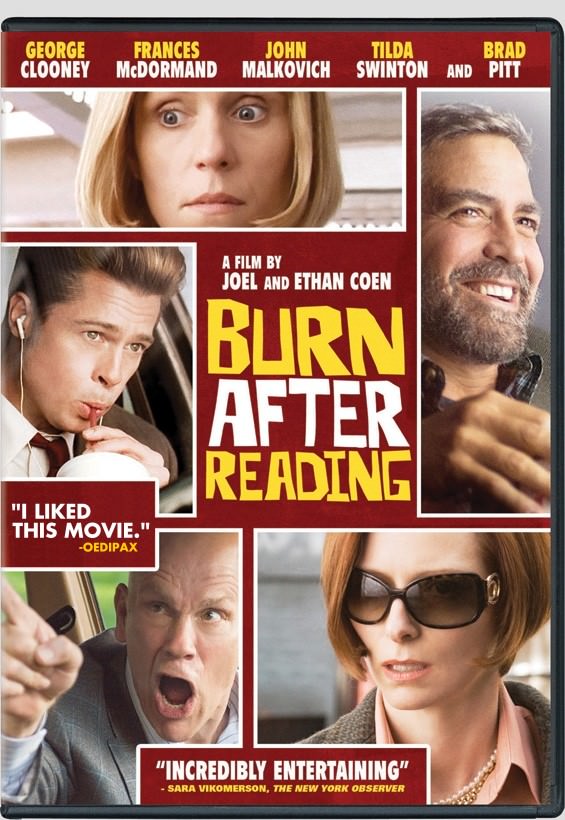 Well done, domino. I should print that out and replace the real cover when I buy the DVD.
Top

The actors do a nice job, but otherwise this was just stupid and dull. The only scenes I found even marginally amusing were the ones with Sledge Ham... er, David Rasche and J.K. Simmons.

Armond was really grasping at straws when he wrote:

Each character practices self-justification. Their defensive utterances (“Sometimes there’s a higher patriotism.” “I am an American citizen, and I will not take this kind of treatment.”) reveal our true politics.


Uh, no. The characters were anything other than zany caricatures--does this guy actually receive a paycheck for his drivel?

Oh well, other than my anger at another stupid Armond review, I had absolutely no investment in this movie, and that's a good thing, since I'll have forgotten it by tomorrow morning. I just wish I could have that 90 minutes of my life back.
Top

For as silly as it was, I thought it was entertaining. Sometimes it is OK to leave your brain at the door. I think my favorite scene was when Malkovich was doing the workout and talking to himself, that was his character in a nutshell.
Top

I don't mean to highlight your typo (although it is ironic, considering what I'm going to say), and I don't mean to defend Armond at all, because I don't even know what he was going on about. . . but certainly they have to be caricatures of something. You don't just pull a caricature out of thin air, you take something and exaggerate it. Surely we have to see this, to some extent, as satire (like most of the Coens' comedic work), even if it's not particularly good or meaningful satire.
Top

I thought it was good and meaningful satire. Admittedly it wasn't meaningful in any deep sense and this is one of their more shallow projects, but everything is there. It doesn't appear there was much of a goal to the movie so entertainment value is its core, which for me it excelled at. Now Serious Man by the sounds of what their trying better shape up though.
Top

I don't mean to highlight your typo (although it is ironic, considering what I'm going to say), and I don't mean to defend Armond at all, because I don't even know what he was going on about. . . but certainly they have to be caricatures of something. You don't just pull a caricature out of thin air, you take something and exaggerate it. Surely we have to see this, to some extent, as satire (like most of the Coens' comedic work), even if it's not particularly good or meaningful satire.

Fair enough (and oops!). Perhaps I just got annoyed that Armond is claiming that it's particularly biting or accurate satire. I certainly wasn't expecting a serious movie, and I love Coen films like Raising Arizona, but this one just did nothing for me. I felt as perplexed as the CIA agents at the end, wondering what exactly the point of it all was.
Top

I believe that was the point.
Top

kaujot wrote:I believe that was the point.

Even if true, that doesn't make it a good movie.
Top

For me it does. After all Seinfeld is celebrated for the same thing.
Top

I never cared for Seinfeld, either, but I also didn't find it to be just mean. I suppose what bothers me about Burn After Reading is that the pointlessness is nothing more than a delivery mechanism for the sneering misanthropy of two brothers who haven't bothered to think enough about their characters. It's one thing if well-written characters are unlikeable, but when they're written with all the subtlety of a Scooby-Doo villain, the film just comes off as a rant against people, but there's no evidence in this film, IMO, to suggest that the Coens understand people well enough to be justified in their rant.

Enough. I'll just say that it's not on my wavelength and stop there.
Top

i don't think realism is really relevant to a movie like this. i mean, people performing unbelievably stupid actions is the basis of what, like, at least 50% of all comedies, great or otherwise? personally, i can count on one hand the number of movies i've enjoyed as much as this one.
Top

It's not a problem that the characters are stupid, but that the film they occupy is too
Top

what was so stupid about it? i mean, i know the coens aren't exactly humanists, and that its stupid to have a superior tone when youre dealing with characters who are as unrealistic as in this film, but with Burn After Reading it seemed to me more that they were just trying to make an entertaining movie. the only thing that struck me as excessively nasty and sniggery was the fate of richard jenkins' character. aside from that i think this is much less arrogant and sophomoric than most of their earlier work, i.e. Barton Fink.
Top

The best thing about Burn After Reading was the trailer to it, it contained all the good stuff there was in that movie. I don't think I had a single laugh when I was in the cinema watching it. The love that the Coen brothers used to have for their characters, seems to be gone over the last decade.
Top

This felt like the Brothers' most tossed-off film to date, but it's still head and shoulders above the vast majority of mainstream comedies.
Last edited by MoonlitKnight on Mon Jun 28, 2010 11:15 pm, edited 1 time in total.
Top

Grown Ups. I would much rather watch this than Grown Ups or anything featuring Adam Sandler and his hangers on. Though to call it a comedy would be a bit of a misnomer. A movie featuring him married to Salma Hayek and Kevin James married to Maria Bello should be considered science fiction.
Top

Boy, I sure would rather watch Apples than Oranges
Top Just rewatched this on mfunk's recommendation for the first time in eleven years and....I am gobsmacked. When placed into historical context of when it came out, this story of bumbling incompetence, depravity and unflagging narcissism at the heart of the country's political set seems like prophecy. Yes, it still stands out as their most remarkably cynical and cruel film (although a hell of a lot funnier than I remembered) - but watching it now, I feel like such barbs hit a deserving mark. Also in re-appraising the plight of those plebes who, by choice, get drawn into the upper echelons of wealthy, connected DC-ers, I found them much more sympathetically treated than I remembered.

Pretty sure this'll go down for me as one of the best cinematic documents of this particular era - made well before its time.
Top

Yeah, I have little in the short term to add to the above, but I can't remember a film I've been more wrong on upon release than this one. LQ and I looked at each other completely befuddled after it the first time around and felt like it had very little value, especially coming off of No Country for Old Men, and we both sort of forgot about it and never thought we'd go back to it. After hearing it referenced in relation to our current political climate what feels like hundreds of times on podcasts and the like, I decided to drop my guard and put it on again and by the end I was effusively urging LQ to do the same. In the midst of the inspirational Obama election (and in my early 20s, I should add) this seemed like a bizarrely toxic film and a tone deaf one at best - after all, isn't everything sunny and wonderful in DC? Aren't these people in our government aspirational figures now? Aren't we living in The West Wing? Provided distance from it, and given (Russia included!) all of the events of the last 4 years, not only does this film seem like inspired satire, it feels a more than a little bit like real life.

From Ladykillers territory to major Coens, for me, in one fell swoop.
Top

mfunk9786 wrote:This film was a big disappointment. Anyone making the claim that this could become a Lebowski-like cult film has me scratching my head. I barely remember it, and I just saw it last night.

Quoting your original post about the film for shits and giggles.

I've always felt alone in liking this one, even Coen fans in my family hated it. I've seen it popping up in a few discussions lately with more positive comments, so I'm happy to see it being reevaluated. Maybe following their big No Country win with a movie that is essentially just a goofy film was what killed it.
Top

I should rewatch this, I Loved it opening weekend and was baffled more didn’t like it, but then I’ve always been profoundly cynical about DC. I actually remember liking this much more than no country for old men or a serious man.
Top

I've always felt alone in liking this one, even Coen fans in my family hated it.

Love it, think about it often. I might identify with the JK Simmons character more than any other in cinema.
Top
Post Reply
126 posts