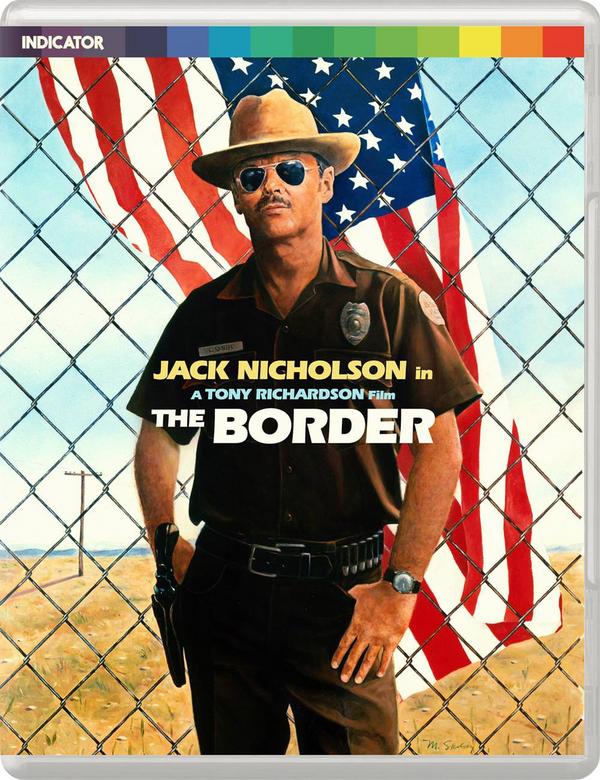 Jack Nicholson (The Last Detail, Wolf) gives one of his finest and most subtle performances as a hard-working but deeply disillusioned Mexican border-guard in this tough thriller from renowned British filmmaker Tony Richardson (Look Back in Anger, A Taste of Honey).

MichaelB wrote:Final specs for The Border:

Beaver on The Border
Top

I'm quite sure I read about it but can't find if I dreamed it or if it's real : my Border booklet has the credits page all messed up in gibberish. Is there a replacement program in place for the booklet ?
Top

tenia wrote:I'm quite sure I read about it but can't find if I dreamed it or if it's real : my Border booklet has the credits page all messed up in gibberish. Is there a replacement program in place for the booklet ?

Thanks Michael.
Though I'm not sure I'll actually change it, I admit it got me laughing quite a lot.
Top

tenia wrote:Thanks Michael.
Though I'm not sure I'll actually change it, I admit it got me laughing quite a lot.

Stuff like this is tooth-grindingly annoying, because it's a mistake that happened after we signed off on the project - and of course we double-checked the proof that we signed off on as soon as the problem came to light, but unsurprisingly it looked perfect. Each Indicator booklet gets at least four pairs of eyes cast over it prior to sign-off, so the chances of us all missing something quite that glaringly obvious are nonexistent.

The real mystery is why the printers missed something that obvious - and it wasn't a first offence either, as the Day in the Death of Joe Egg booklet had an identical problem. But at least they admitted liability immediately (it was a bit open and shut in this respect), which is why replacements were produced very quickly.
Top

I can totally imagine how it can frustrating to see this happen after all the controls in the world.

I've been for the past weeks catching back some readings, including some booklets from video releases. I totally forgot about this so when I opened the booklet and saw this (on which you pretty much can't make out a single word of the credits, but all the names are however intact !), I just bursted out laughing. My GF next to me was wondering what was happening, and when I showed her, she got stuck on trying to decipher what happened there.

It seems to me like something I can pretty much live with anyway, but I probably won't bother with having the booklet replaced just for that, because I didn't impact my reading at all. But it suddenly made me remember about reading something about this, and wanted to know if I dreamt it or if it was real.

I now have to check my Joe Egg booklet.
Top

It's clearly some glitch to do with a particular font or treatment of said font - but since most booklets turn out perfectly and we do it the same way every time (and with the same font), I've no idea why it's gone wrong twice. And I'm even more baffled as to why it isn't spotted at the printer's end, as it really couldn't be any more obviously a mistake.
Top

This was a really beautiful, powerful film. There's a lot of nuance and dimension to the characters, without anything feeling overly emphasized. Between Indicator's release of this and Blue Collar, it's really great to see Keitel in these really unsure of himself and insecure positions (I guess he does that a lot, such as with Who's That Knocking at My Door.)

I was especially drawn into the subplot of his uneasy marriage and his complete inability to face or address it, which seems to set the stage for a lot of the decisions being made in this film.

SpoilerShow
The film does a superb job of not centering the financial gains of the criminal conspiracy. It almost feels like it's just 'something to do' for some people living a somewhat boring and repetitive life. Nicholson quickly realizes that the monotony of California is just as present in El Paso. The scene with him 'drawing the line' ends up having a greater meaning, as Nicholson is determined to have meaning in his life, whereas Keitel doesn't seem to.
Lots of great performances, and a superb finale which definitely has you on the edge of your seat.
Top

I would certainly agree Drucker! The other great Keitel role around this same time that comes to mind is Fingers.
Top
Post Reply
10 posts • Page 1 of 1