Discuss DVDs and Blu-rays released from Arrow and the films on them.
Forum rules
Post Reply
12 posts • Page 1 of 1
Message
Author 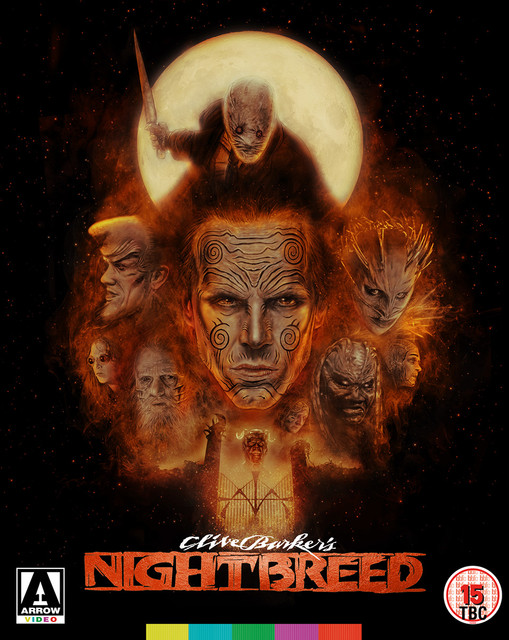 From the mind of writer/director Clive Barker – the macabre visionary responsible for Hellraiser and Candyman – comes Nightbreed, a nightmare-induced fantasy set in a world like nothing you’ve ever experienced before… one which will leave you questioning who the real monsters are.

By night, Aaron Boone (Craig Sheffer, Teen Wolf) dreams of Midian, a hidden subterranean world where monsters have created a haven from humanity. Under pressure from his girlfriend Lori (Anne Bobby, Born on the Fourth of July), he attends psychotherapy sessions, unaware that his shrink, Dr Decker (Videodrome director David Cronenberg), is setting him up to take the fall for a series of violent murders. Convinced he no longer belongs in the human world, Boone goes in search of Midian – not realising that the real killer has plans for both him and the colourful cast of outsiders who call it home…

The victim of studio interference and an unrepresentative marketing campaign, Nightbreed was poorly received by critics on its initial release and failed to ignite the box office, but has since undergone a radical reappraisal. Arrow Video is proud to present two versions of this depraved cult classic: the studio-approved theatrical cut and the reconstructed, reinvigorated director’s cut, for the ultimate nightmarish viewing experience.

I've been meaning to check this out for some time but it's always been pushed back in my queue because a new version always seems to be coming out. Is it worth at least taking a look at if I'm a fan of the other Barker films and stories?
Top

YMMV. Barker's films go for or hint at an epic feel, and his ode to monstrosity in Nightbreed, especially the DIrector's Cut, shows this intention to its fullest. However, intention and execution are separated by a wide gulf, and the film falls wide of the mark. Barker has affection for his misfits, which realigns your expectations of a monster movie, but his lead can't carry a movie, Danny Elfman's score doesn't work (and feels like offcuts from his Burton scores), and neither the Theatrical nor the Director's Cut achieve the scale Barker clearly wanted. Budget limitations and the notorious interference of Morgan Creek meant that this could never clear the tower. It is, though, worth your time for Cronenberg's performance and to see Barker evolve from Hellraiser.
Top

It's a mess... but an interesting one that I revisit once in a while.
Top

Definitely worth checking out if you’re a Barker fan. As a movie, it’s an interesting failure. But as a step in Barker’s creative process and an example of him dealing with hindrances on his creative control, it’s essential. Being able to watch the different cuts and hear Barker speak about them is good stuff.
Top

I fell hook, line, and sinker for the Lord of Illusions trailer. I thought "he's finally done it! Quantum Leap Guy was an odd choice, but I'm so there!" I ended up with regrets.
Top

And I loved Lord of Illusions, an infinitely better film than this. Here are my thoughts from revisiting it last year
Top

So you're saying I should forego my 762nd rewatch of One Crazy Summer and give LoI another shot? Kind of a Sophie's Choice.
Top

Glad to have the choice between different cuts as I’m not sure the DC offers any serious improvement; indeed, I’d argue it presents a new range of problems.

There is some striking stuff in the movie which continues to fascinate.

Going back, Barker’s own novella was so compact and just got on with it.

All the best Barker on film is flawed but fascinating aside from Candyman. Would love to see Hellraiser V Inferno get a decent or very good version. I can only find interlaced versions. It could play well with Nightbreed given it brings back Craig Scheffer to a Barker production and is strikingly directed by Scott Derrickson.
Top

Except it's not "a Barker production". His involvement in the series ended with Bloodline.

Big Ben, as others have noted, it's definitely worth taking a look. It's not a perfect transition from novel to film, but I think in that sense, Lord of Illusions has been the only film that's truly captured Barker's voice, even if the tone was altered for Scott Bakula's involvement. I've personally got a soft spot for Nightbreed, as I'm pretty sure both the film & book were my introduction to Clive Barker, at least consciously - I may've seen the first two Hellraiser's prior to this. It's got some interesting & memorable characters; and I don't think Craig Sheffer's as bad as has been suggested. The film's just a little too much a product of its time, I'd say. The director's cut brings it much closer to its source, but it's unfinished in a similar way to the extended cut of Alien 3, and is missing some of the edge present in the novel.
Top

Thanks for all the info folks I think I'll certainly pick this up as a curiosity. Surely a new version won't come about by the time I purchase this.
Top