Speculation on the Blu-ray.com forums is that the release will be a BD-R
Top

But checking the thread I see it now has the generic "Blu-ray Disc" that MOD Blu-rays have to use.
Top

The last one is a surprise, because looking at the title, you'd think that either TT or Mill Creek would've released it at some point.
Top

domino harvey wrote:Some of these are good films, but Christ, can I really justify owning a set devoted to the worst actress of the studio era?

Acting, schmating who gives a flying FUCK? Novak emerges at exactly the point in cinematic history that "acting," before the camera implodes and post-Stanislavsky "being" begins to assert itself.

The undervaluation/misunderstanding of Kim Novak's supreme value is the sport of fools (rethink it man - RE-THINK IT!)
She is THE goddess who articulates, with precision unparelleled, the burden of being of being a beautiful woman/commodity in a world ruled, all but exclusively, by men. PLEASE read Richard Lippe (Lippe, Richard, "Kim Novak: A Resistance to Definition," in cineAction (Toronto), no. 7, December 1986) or even David Thomson.

Novak, unlike MM (whose all-but-useless-ass she could kick from one side of the frame to the other [Howard Hawks's films notwithstanding]) survived, and with a respectable body of work. The two Marilyn's (Baker & Novak) form the pivot point that delineates the old, studio-era goddess, received passively, dreamily by the spectator [all but the Dietrich of Sternberg] and the modern goddess, such as Vitti, etc and supremely Karina, who must be reckoned with in a new way - dare one say intellectually? When Scottie Ferguson (in VERTIGO) says "your hair..it can't matter to you" to the brunette Judy and, invariably, audiences laugh,... whether they understand it or not people are not laughing at the conventions of old Hollywood or the clumsiness of the dialogue but the horrifying spectacle of one human being's inability to recognize the essential need of another human being's need to be loved, to simply be recognized for themself - the naked horror that is the solipsism of male sexual privelege. This dilemma articulates itself time and time again in the roles that Novak was cast in. (Did she choose these roles consciously? Does it matter? These are the roles she played - the life she has led on-screen.) In PICNIC - "I'm just so tired of being told I'm pretty" - in BELL, BOOK AND CANDLE - the witch who learns to cry (read, to be human and who needs to be loved), THE LEGEND OF LYLAH CLARE, the supremely melancholy heroine of STRANGERS WHEN WE MEET [a masterpiece btw] who simply wants to be seen as a woman, not a "thing" [watch her pain as Kirk Douglas's son surprises her in the hall, saying "You're pretty"]. Kim Novak, in a manner unchallenged by any other actress of the studio era, articulates the soul-obliterating anxiety that can confront beautiful woman.

The cult of Marilyn, (one of the defining, and most lamentable, cults of the latter half of the 20th Century,) and its worship of the failure and the vanquishing of the female, leads inexorably to veneration of the cold, hollow, facsimile presented by Madonna (who along with Ronald Reagan and HIV combines to form the three great plagues of the '80s - the callous degradation and dismissal of basic human need). Novak, on screen, articulates the path - mistakenly, tragically - not taken, the lesson not learned, the need to strip away the illusions promulgated throughout the studio era; and to recognize the essential humanity of the female of the human species as something other than the receptacle for male fantasy.

And, totally, as a PS...Novak the worst actress of the studio era??? Really? REALLY?? Have you ever seen a movie with Merle Oberon, Loretta Young (MAN'S CASTLE notwithstanding - she was just a kid then, and who could refuse Borzage a human presence?) or Geraldine Page ferchrissakes? Not to mention the excremental Maria Schell (Astruc notwithstanding - pardon me, all rules have their exceptions)?

Taking your word for it, GP, with a viewing of Strangers tonight. Vertigo is the only film featuring Novak that I've watched. My assumption has always been that her performance had more to do with Hitchcock's manipulation that her craftwork.
Top

If you have thoughts to share after watching, they’re probably better suited for discussion in the Richard Quine thread
Top

Strangers has my avatar star in it! Keep forgetting that Kovacs did straight stuff (straight for Kovacs, anyway). Note taken.
Top

Sony has put up a survey to determine at least one upcoming 4K release, but I just want to point out how utterly bonkers the initial shortlist of ten movies is from the entire Columbia library:

I love basically every single one of the movies listed there but even I, a big fan of the movie, think it's downright perplexing that AWAKENINGS makes the cut.
Top

There's also a second question asking to choose which three of the following you would want to see get 4k UHD releases, which sort of surprisingly includes three Classic-era options:
1776
21 JUMP STREET / 22 JUMP STREET
A LEAGUE OF THEIR OWN
A PASSAGE TO INDIA
ANNIE (1982)
AS GOOD AS IT GETS
AWAKENINGS
BERRY GORDY’S THE LAST DRAGON
BIG FISH
CALL ME BY YOUR NAME
CAPTAIN PHILLIPS
CLOUDY WITH A CHANCE OF MEATBALLS
DAS BOOT
DRIVE
HEAVY METAL
IN THE LINE OF FIRE
IT HAPPENED ONE NIGHT
JERRY MAGUIRE
LAST ACTION HERO
LOOPER
LOST HORIZON (1937)
MARY SHELLEY’S FRANKENSTEIN
MATILDA
MONEYBALL
MY BEST FRIEND’S WEDDING
RUDY
SENSE AND SENSIBILITY
SILVERADO
SLEEPLESS IN SEATTLE
SNATCH
STARMAN
STRIPES
STUART LITTLE
TEARS OF THE SUN
THE AGE OF INNOCENCE
THE DEVIL’S BACKBONE
THE LADY FROM SHANGHAI
THE LEGEND OF ZORRO
THE MASK OF ZORRO
THE OTHER GUYS
THE REMAINS OF THE DAY
WHIPLASH
ZATHURA

And a box for listing any other "Sony Pictures" movies you'd want to buy on 4k UHD.

I don't have a 4k player and don't really have any plans to buy one, but it's nice to see them actually at least considering the idea of 4k UHD for B&W films that aren't man-on-the-street famous...
Top

No Lawrence of Arabia?!
Top

I’m sorting through a lot of Columbia outtakes, 2nd unit shots, etc., and am trying to match the film to the “Production #” on the clapperboard. Through internal evidence, I’ve been eventually able to figure out most of them, but for convenience and accuracy does any know of a reference work that lists Columbia Production # to Film Title? 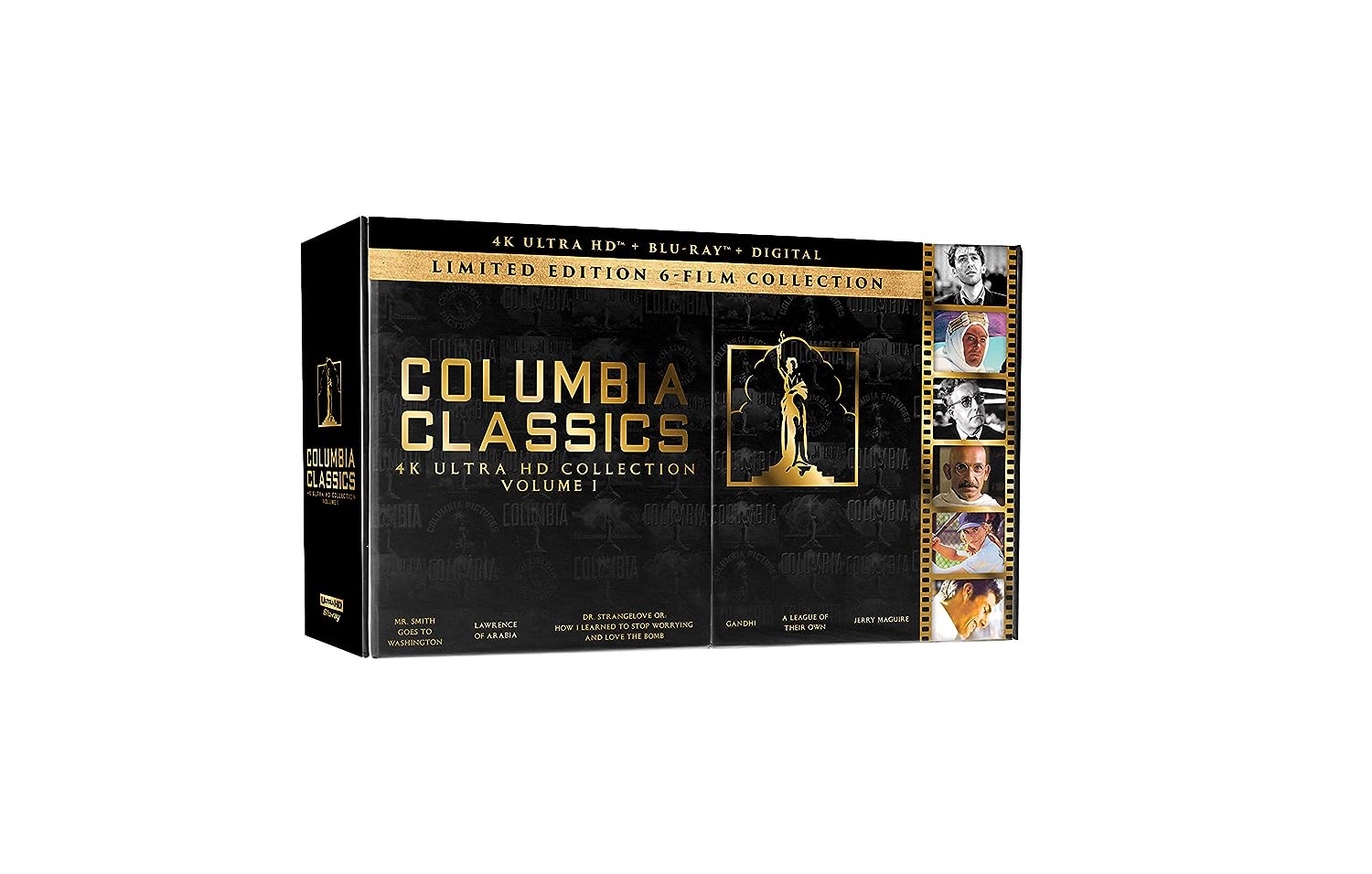 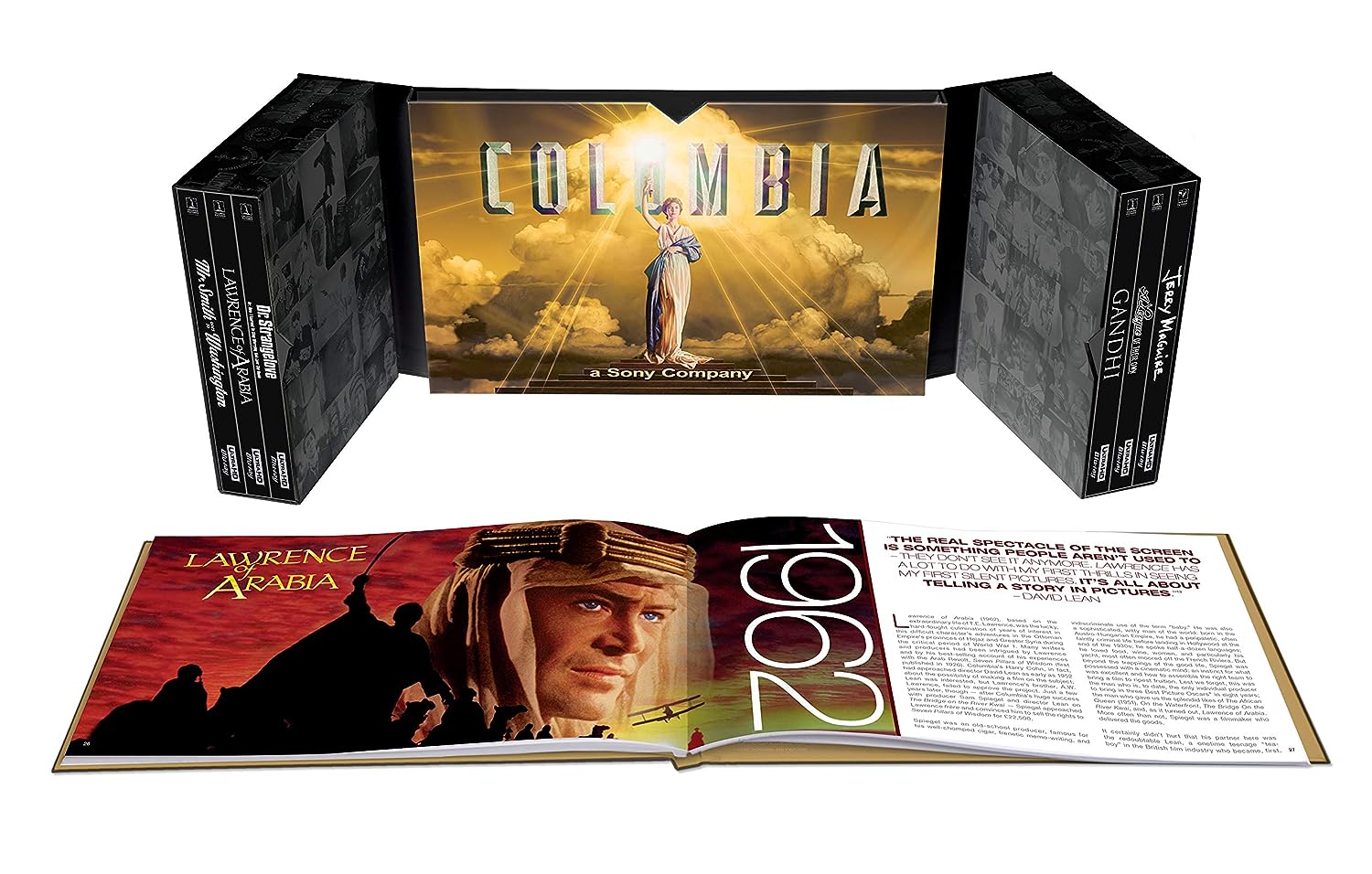 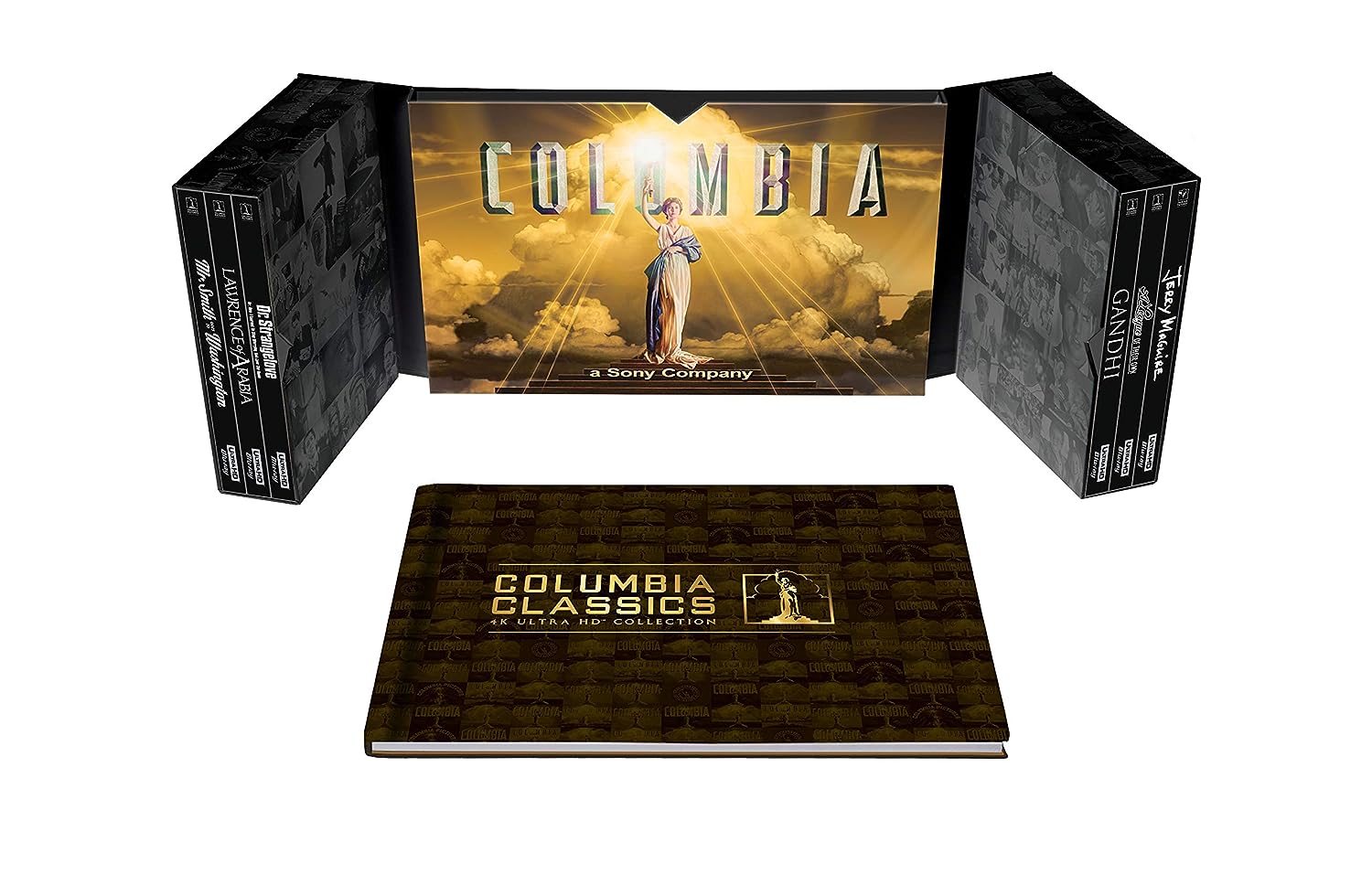 Well, shout out to Sony for curating six movies I totally love that make me totally happy to buy something like this at release to support more exploration of the catalog
Top

More details in the press release. Dr. Strangelove will carry over all the Criterion special features, while Lawrance of Arabia and Gandhi will be split across two discs.
Last edited by eerik on Fri Apr 03, 2020 3:10 pm, edited 1 time in total.
Top

Isn't Sony the label that contractually owns any new supplements produced for their licensed titles? This may not have been Criterion's call
Top

eerik wrote: ↑
Fri Apr 03, 2020 3:06 pm
More details in the press release. Dr. Strangelove will carry over all the Criterion special features, while Lawrance of Arabia and Gandhi will be split across two discs.

I imagine Lawrence of Arabia will be sourced from the same 2012 4K restoration that based its work off of 8K scans of the OCN. From what I can remember of the DCP screening I attended is a super-clean image, which is no surprise given the source elements.
Top

I'm hoping that at some point soon afterward LAWRENCE OF ARABIA at least will be available individually...
Top

A Czech retailer has a standalone release up for preorder with a release date of June 3rd. I have to assume it'll be released elsewhere around the same time.
Top

If not at the same time I would think by the end of the year. I just can't see Sony passing up additional sales via individual release for some of their more popular catalog titles.
Top

The 4K box is available for CAD 99.99 from Amazon.ca which is about $72 (significantly cheaper than the US price).
Top

Anybody wanna take a guess as to what's forthcoming in future volumes? I'd say Taxi Driver is a given, and maybe On the Waterfront if being distributed by Columbia counts.
Top

These are the titles included in the quotes page of the book that have not been released:

It Happened One Night
On the Waterfront
Oliver!
Easy Rider
Taxi Driver
Stripes
Tootsie
Awakenings
As Good As It Gets
Talladega Nights
The Social Network
Captain Phillips
Little Women

Which suggests two further boxes from this pool and one standalone (which could be Talladega Nights due to seeming such an odd duck out, or The Social Network for its anniversary, or maybe Little Women bc its release cancelled and they didn’t update the art...)
Top

I think the best guesses for a second volume come from the first half of that list. A box without historic prestige titles won’t sell the kind of numbers they’re going to see from Vol. 1. It Happened One Night, On the Waterfront, and Taxi Driver make the most sense as anchors for Vol. 2, if it’s going to be anything like the first set. The remainder of that box will probably be as random as the latter titles in the first one, but I doubt anything as recent as Captain Philips will make the cut. Tootsie, Little Women, and As Good as It Gets seem more likely than the rest.
Top

The goal isn’t to front-load all the best library titles into one set; it’s to spread out the titles so each set appeals to a wide variety of interests. So “the best” titles, your Easy Riders and Taxi Drivers, should be spread out to balance movies like Awakenings or Oliver! that are more filling a slot because they have 4K masters done. If they cared about just the most appealing titles they would have put Taxi Driver in Gandhi’s place in the first set. Similarly, the premise of the sets is “the Columbia library - from then to now!” and the fact of their inclusion in a list of “the great Columbia quotes” shows that recency is not preventing Captain Phillips or Little Women from meeting that criteria. In fact, the survey upthread indicated one of the goals in these sets is to have a “modern classic” to go with the rest - which just happened to be a ~25 year old title.

It’s odd, IMO, you think Awakenings is more likely to be included then Captain Phillips, basically the only movie in recent memory to have entered the collective consciousness with a classic movie quote other than maybe the Social Network. The inclusion of recent movies will help sets like these sell, and limiting it to just the old ones would cut off the type of movies most UHD consumers seem to be interested in.
Top

These random studio collection boxes drive me up a wall. I'll wait for individual releases of the ones I want (Lawrence, Strangelove, Taxi Driver, On The Waterfront, Oliver!, maybe Mr. Smith), having a disc with Tom Cruise or Greg Kinnear in my collection would give me the heebee jeebies.
Top
Post Reply
486 posts