Discuss DVDs and Blu-rays released by Eureka/Masters of Cinema and the films on them. If it's got a spine number, it's in here.
Forum rules
Please do not clutter up the threads for MoC titles with information on pre-orders. You can announce the availability of pre-orders in the MoC: Cheapest Prices / Best Places to Buy / Pre-Orders thread. Any posts on pre-orders in any other thread will be deleted.
Post Reply
38 posts
Message
Author


New Announcement! A set of three early films by Taiwanese filmmaker Hou Hsiao-hsien will be joining The Masters of Cinema Series on Blu-ray in Spring 2018.

CUTE GIRL (1980) – A young bride-to-be falls for a laid-back land surveyor whilst visiting her family in the countryside. Conceived as a commercial vehicle for pop star Kenny Bee, this romantic comedy was Hou Hsiao-hsien’s debut feature.

THE GREEN, GREEN GRASS OF HOME (1982) – A substitute teacher (again played by pop star Kenny Bee) moves to a remote village, where he falls in love with another teacher at the local school.

THE BOYS FROM FENGKUEI (1983) – Three young men leave their fishing village for the city to look for work, where they face some harsh realities about growing up. The film which established Hou Hsiao-hsien as a leading figure of the Taiwanese New Wave, THE BOYS FROM FENGKUEI was rapturously received in Europe and is often considered the director’s first mature masterwork.

All three films will be presented from stunning restorations, across three Blu-ray discs. Special features and artwork TO BE ANNOUNCED

Had a feeling they'd announce more Hou at some point, but based on DAUGHTER OF THE NILE, I would've thought they'd only do one or two single titles. A triple-set is an immediate purchase from me!
Last edited by rapta on Thu Feb 01, 2018 2:10 pm, edited 1 time in total.
Top

I don't know at all if it's any clue for potential future releases, but Carlotta will release these 3 movies and Daughter of the Nile in their upcoming French set, but the set will also contain A Time to Live, A Time to Die & Dust in the Wind.
So maybe these 2 will also pop up through MoC in the near future.
Top

Wonderful! Daughter of the Nile was the first Hou film that really connected for me, so I’m excited to see more of his early work.
Top

In the Belgian Cinematek set, each film was accompanied by a video essay by Cristina Álvarez López and Adrian Martin so hopefully they make their way over here as well.
Top

I just got Daughter of the Nile and Brighter Summer Day, so more Taiwanese New Wave is welcome. Day one buy for me.
With the exception of Daughter and the Assassin, what else by Hou is available on English friendly Blu ray?
Top

I've only seen Cute Girl out of these three so I'm picking this up for sure. I saw a double feature of that and Cheerful Wind (any reason why it isn't on these sets?) during the last retrospective at UCLA and they were a joy to watch. I shamefully still haven't picked up Daughter of the Nile yet but I'm thrilled to see more Hou from MoC.
Top

Glad I held off on the Cinematek DVD set, which was cheap enough (around $30 with shipping from Belgium) that I came within one click of pulling the trigger on a couple of occasions.
Top

dda1996a wrote:I just got Daughter of the Nile and Brighter Summer Day, so more Taiwanese New Wave is welcome. Day one buy for me.
With the exception of Daughter and the Assassin, what else by Hou is available on English friendly Blu ray?

A Summer at Grandpa's seems to be out on BluRay in Japan, but as far as I know that's not English-friendly. But nothing from the 90s or 00s.
Top

Boys from Fengkeui was also released on blu-ray in Japan, without English subs; and the excellent film Growing Up (which Hou wrote/produced but did not direct; it's unmistakably his work) is on the Taiwanese set with Sandwich Man and In Our Time. And of course his most recent film, The Assassin, is on blu-ray. Arguably his two most ambitious films, City of Sadness and The Puppetmaster, are AWOL and will likely remain so for a long time, sadly.
Top 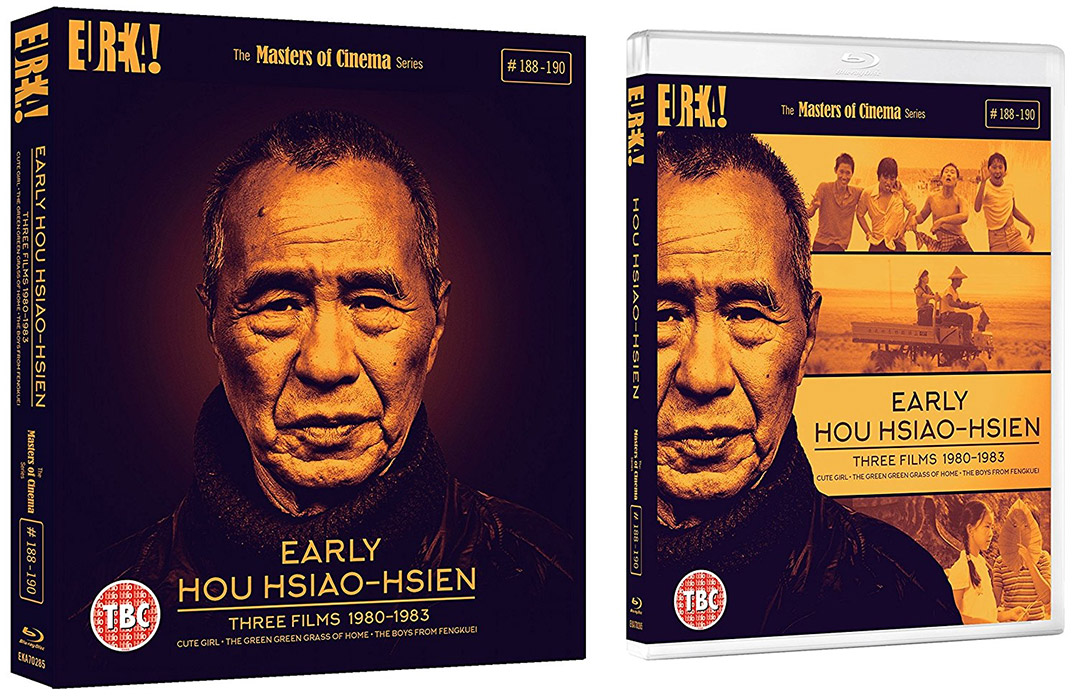 (Pardon the size, I’m on my phone)
Top

Precisions for these 3 movies :
- The Boys from Fengkuei has been restored in 4K by the Belgian Cinematek and it looks very nice.
- Cute Girl and The Green Green Grass of Home have been restored in 2K and look quite OK though clearly not as nice. Both restorations are much dirtier and Cute Girl has a green cast over the good chunk of the movie (probably from a fading of the materials used for the restoration).
For those interested in a few screencaps, I reviewed here the French Carlotta boxset that contained these 3 movies. Cute Girl's screencaps are # 1 to 10, GGG of Home 11 to 20 and Fengkuei 21 to 30.
Top

How are these three films? Both content wise as films, and as precursors to Hsien later works? I'm very interested in picking this up
Top

I've only seen Boys which is very good if atypically scored for a Hou film. I understand that the earlier two films still show him finding his footing as a director. Strange but welcome that something like this would come before many of his later works.
Top

Shame there aren't any fresh extras for this release. Even the booklet (one essay) seems a bit skimpy.
Top

I'm disappointed in the booklet size, but I am impressed by the price.
Top

tenia -- Did you ever see the Belgian DVD box set? If so -- how much improvement?

swo -- I'd say that Green Green Grass is sort of a transition between the first two quasi-musicals (only one included in the set) and HHH's more "typical" films. I enjoyed all these early films -- but I'm prejudiced...
Top

I never saw the movies prior to the Carlotta BD set, so can't say how much of an improvement they are over the DVDs.
However, Cute Girl and GGG of Home definitely look like 2K restorations, at least in terms of definition. It's just that the elements for Cute Girl in particular look like they were in a worse shape, especially when it came to color fading. GGG of Home is more in between : it's cleaner and more stable color wise, so it looks like your regular competent 2K restoration, while Cute Girl have the definition but seems partially faded and dirtier.

But both Fengkuei and Daughter of the Nile were restored at 4K, so both look superior (especially Daughter thanks to its more specific color grading).
Top

zedz wrote:Shame there aren't any fresh extras for this release. Even the booklet (one essay) seems a bit skimpy.

Agreed. Has the Olivier Assayas-directed episode of Cinema de notre temps ever had a home video release?

That would be a dream has I've searched everywhere and couldn't find an English friendly version.
Top

Calvin wrote:Has the Olivier Assayas-directed episode of Cinema de notre temps ever had a home cideorelease?

There's a French DVD (no English subs), a Hong Kong VCD (Chinese-English subs, burned in of course), and a Taiwanese DVD (optional Chinese or English subs). The latter has a standalone release* but is easier to find as part of the ten-disc box set "Classical Films Works Produced by Peggy Chiao 經典華語電影系列." One thing that might be keeping it from a release elsewhere is that the producers apparently didn't or couldn't clear the worldwide rights for the film clips used within.

*Edit: Various etailers list only Chinese subtitles on the standalone release, and the back of the packaging appears to confirm this. It would be pretty strange if the standalone disc and the disc in the box set weren't identical, as they came out around the same time and the standalone release is billed as part of the same series of Peggy Chiao-produced films, but I suppose it's possible they only included English subs for the boxed version. In any case, the standalone disc is seemingly impossible to find outside of a few non-English-friendly Taiwanese retailers.
Top

tenia wrote:I never saw the movies prior to the Carlotta BD set, so can't say how much of an improvement they are over the DVDs.
However, Cute Girl and GGG of Home definitely look like 2K restorations, at least in terms of definition.

This is awesome, and I will buy it, but... kind of weird (lazy?) to put an image of latter-day, old-man Hou on the cover of a bunch of films he made in his 30s. Also the monochromatic severity of the shot seems inappropriate to these loose, often buoyant films about youth.... Honestly this makes me appreciate the care Criterion typically takes in their packaging.

(On a side note, I understand it from a marketing perspective, but sometimes the auteur-centered packaging of some boutique releases seems to me to betray the original appeal of the films, e.g. the star-driven Cute Girl. Even Criterion gets into this, as when the cover of Young Mr. Lincoln boasts a John Ford credit but no mention of Henry Fonda. Nitpicky, I know.)
Top

Great to finally have some more Hou on English-friendly blu-ray. However – correct me if I'm wrong (I haven't seen the films) – isn't this release a bit weird/off? Fine that the films have been restored, but I remember Hou himself saying that he considers The Boys from Fengkuei his first "real" film, done around the time when he and Edward Yang started working as independents, and that he wasn't able to do what he wanted to until his segment in The Sandwich Man. This meaning that both Cute Girl and The Green Green Grass of Home are lesser Hou, more standard genrefilms...

The French box set from Carlotta has these same three films + A Time to Live and a Time to Die, Dust in the Wind AND Daughter of the Nile, which makes way more sense. I'm sure that this must be a rights issue, but for people (like me) that have been waiting for HD releases to dive into Hou's filmography, it may be a bit off-putting to start this way, with his lesser, and more standard works... And viewers who loved the UK release of Daughter of the Nile may be put off by these ones?

Is this a case of right price, wrong films?
Top

Well they are early works of a director finding his footing, I hardly see how this is a wrong place to start
Top

Granted, Cute Girl will not really prepare one for later HHH films -- but Green Green Grass of Home definitely points (at times at least) in the direction of Sandwich Man and Summer at Grandpa's.

Not sure how many people are likely to buy this set who have not already had some exposure to HHH...
Top
Post Reply
38 posts