We'd been talking about this young, impressive label in the Chinese Cinema thread but they've put out a fair amount of classic Hollywood cinema as well. All very lavish editions with extremely limited print runs. You can see their releases to date here, most of which have quickly sold out. 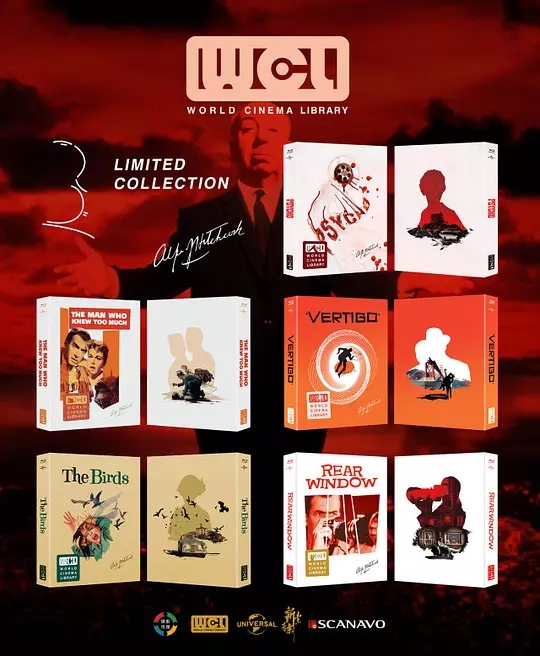 I already posted about it in the Chinese DVD forum, but since it's hard to figure out where to pre-order these titles from I highly recommend Media Psychos. It's a drawn out process involving several steps, but I took a chance on them for The Horse Thief and the packaging they use for shipping is the best I've seen. The members are also super friendly and helpful which I hadn't expected.

I just wanted to repeat all that so people don't have to pay $150-300 for these titles afterwards.
Top

Yes, I just joined their group buy for King of the Children to avoid future walletache
Top

it's been fascinating to me to see how the market for luxuries in China (itself a product of the incredible growth of their economy in the Deng and post-Deng eras) has spread to cultural goods like boutique Blu-Ray labels, branded art cinemas, etc.. it was not that long ago that, in relation to home video at least, China was known primarily for being the world's most prolific source of bootlegs. I suppose something similar happened in Taiwan, albeit more gradually and on a much smaller scale.
Top

Got 2nd shipping invoice for The Black Cannon Incident today. I'm hopeful they'll be shipping it out soon.
Top

I got it late last week and haven't popped it in the player yet, but it's a typically lovely set and one of the booklets has an interesting English-language essay from scholar Chris Berry on his experience subtitling the original export prints. (Berry thinks it was the first time in China that a native English speaker worked directly with native Chinese speakers to craft the subtitles, as opposed to the standard practice of having ESL speakers on the studio payroll do a draft translation and then hand it off to native-speaking foreigners for revision; very often the foreigners in question weren't Chinese speakers and they would never have any contact with the original translators. I should say the same basic method is still prevalent to this day, and not just in China.)
Top

I was just thinking earlier today actually, whatever happened with my King of the Children group buy order
Top

In terms of the groupbuy, only Heat is still open so you'd probably have to pay a lot more for those other titles.
Top

The Wandering Earth and The Swordsmen in Double Flag Town have been given release dates of October 26th. Last month I received my copy of Dying to Survive from the MP groupbuy.

I also took swo's advice on here about ordering from taobaoage.com to pick up New Dragon Gate Inn and Bride With White Hair. It was kinda weird ordering from them but cheaper than going through eBay for those titles. My order is in the mail so my fingers are still crossed everything goes well.
Top

I've never really considered getting anything other than the Chinese films in this series (where the accompanying book being in Chinese feels authentic if otherwise uninformative to me). Has anyone picked up any of the English-language releases, and if so, how English-friendly are they?
Top

In terms of the groupbuy, only Heat is still open so you'd probably have to pay a lot more for those other titles.

PS these are just DIskino's WCL recent/upcoming releases. As Luke M's post shows they have other non-WCL releases
Top

Apparently they have a whole other line called MLIFE. I wish I had one of the 120 copies that were made of this:

Or this, with a slipcover made from actual stitchings:

I haven't bought any of the English language releases but I wish I owned them all just based on the covers.
Top

Seeing this thread bumped reminded me to post my impressions of their last two Fifth Generation releases, The Horse Thief and The Black Cannon Incident. Both have excellent transfers, with no undue grain management and convincing colors—I think The Horse Thief has been a bit "enhanced" in the latter respect, but nothing excessive. Both have a sticking point, entirely avoidable in the case of The Black Cannon Incident: the film is occasionally punctuated by landscape shots, including a montage of sunsets near the end, and since these shots are more or less static, the restorers opted to select a single frame from each shot and freeze it for the duration. The problem is that the grain structure is also frozen and these shots consequently stick out like a sore thumb; on the first instance I thought my player was glitching.

More severe is an issue in The Horse Thief where every single shot ends with a duplicate frame. My guess is that the final frame of each shot was damaged in the negative (or whatever the source was) due to how the film was spliced, and the restorers decided to simply remove these frames (as Celestial did with a lot of their Shaw Brothers restorations) and then duplicate the previous frames to keep the soundtrack in sync. Some viewers might not even notice, but for me it was immediately evident and remained an issue throughout the film. As I've noted earlier in this thread, there's another restoration of this film that uses interpolation to bring the frame rate up to 48fps, the logic of which completely eludes me but apparently met with Tian's approval. I wish they could've used that tech on this restoration to recreate the damaged frames instead of removing them completely.

Both discs have original mono tracks and mostly good English subtitles, though The Horse Thief's read less naturally and have occasional typos. As I mentioned above, The Black Cannon Incident has a short English-language essay in the included booklet on the unusual care that went into the subtitles, which clearly paid off. The Horse Thief has both the Tibetan and Mandarin audio tracks, but more surprisingly, it has English and Chinese subtitles for both languages, which reveals how radically different the dialogue is in each. I strongly suspect the team that dubbed the Mandarin version didn't have a dialogue list to work with and simply invented most of the Mandarin dialogue based on the visuals and a synopsis.

The sole extras on these discs are video analyses by Tony Rayns: newly-recorded pieces on each film, plus a vintage one (Rayns' intro to a 1988 Channel 4 broadcast) for The Horse Thief. The new pieces aren't great shakes technically—they did a poor job of micing Rayns, perhaps because they assumed viewers would just be reading the Chinese subtitles—but he's predictably good at contextualizing the movies and their directors and drawing out aspects that might not be obvious (like the subtle "science fiction" qualities of Black Cannon, which wouldn't be evident for anyone without a decent grounding in what China was actually like in the mid-'80s). I only wish he'd gone into more specifics about the production of the films, like how Tian cast the actors for Horse Thief (all amateurs, none of whom appear to have ever acted again), or how Gerhard Olschewski came to be in The Black Cannon Incident. And while I'm not surprised Huang Jianxin didn't participate in any extras for his film—he's now an executive at the China Film Corporation, where his output includes stuff like The Founding of a Republic and Mao Zedong 1949—it seems like a real missed opportunity that Tian didn't contribute any extras to the Horse Thief disc. But Rayns' pieces are so expansive that I can't carp too much on that point.
Top

I believe we joined the groupbuy for King of the Children and Swordsman in Double Flag Town, but that was quite some time ago and I haven't heard anything... so I take it these have yet to be released?
Top

whaleallright wrote: ↑
Mon Sep 23, 2019 1:34 pm
I believe we joined the groupbuy for King of the Children and Swordsman in Double Flag Town, but that was quite some time ago and I haven't heard anything... so I take it these have yet to be released?

Both still have a TBA release date and I also haven't been notified yet (but you will eventually). In the groupbuy for King of the Children they posted photos of the set from an anonymous Chinese collector. So I assume that one is coming soonish.
Top

I read that MP typically gets it a month after they pop up in China. Could be awhile.
Top

I got my invoice for King of the Children and shipping notice yesterday.
Top

My copy of King of the Children came today. It looks beautiful. This was actually my first blind buy from their series so I'm looking forward to watching it tomorrow.
Top

We also got it. The packaging is indeed very lovely. Nothing in English in the booklet this time, sadly—though I know the English-language market is distinctly secondary for this company.
Top

Diskino will be reissuing the five Xi'an Film Studio titles (Red Sorghum, The Black Cannon Incident, Horse Thief, King of the Children, Swordsmen in Double Flag Town) in cut-down versions with slipcases and postcards, but none of the other printed matter that came with the original releases—which is fine for the non-Chinese-literate, since I'm pretty sure the only English material was the essay about subtitling The Black Cannon Incident. Retail is around US$30 each; the Media Psychos groupbuy is still open, but probably not for much longer. They're supposed to be out by the end of the year, but given the history of delays with these titles, I wouldn't count on it.

Also, it's not part of the World Cinema Library, but I'll mention it anyway since it's a Diskino release of a Chinese catalog title: Feng Xiaogang's Big Shot's Funeral will be getting a release at some point. To the extent that this film is known internationally at all, it's probably for the presence of Donald Sutherland, returning to China about a decade after starring in another film there—though personally I think the cameo by Paul Mazursky is more unexpected and noteworthy!
Top

Any hope that these will have wider (easier) distribution?
Top

I doubt it, they're still sticking with their current model of distributing these exclusively through a couple of storefronts on Taobao. No signs of foreign distributors taking them on either, though the other restoration of The Horse Thief (from the China Film Archive) is being sold internationally by Rediance.

And a couple of updates: Swordsmen in Double Flag Town appears to have been released on time despite the delays with King of the Children, and some folks have their copies in hand. So people in on the groupbuy should expect to get an invoice soon. And I haven't seen anything official on this yet, but word is that the first title in wave two of the WCL's Xi'an Film Studios titles will be Old Well (1986), directed by Wu Tianming during his tenure as the studio's head. Not my favorite of Wu's outings as a director—it lacks the rough-edged quirkiness that made River Without Buoys such a revelatory image of rural life—but it has some great cinematography by Zhang Yimou (his last work in that capacity) and a surprisingly good lead performance from him as well.
Top
Post Reply
81 posts