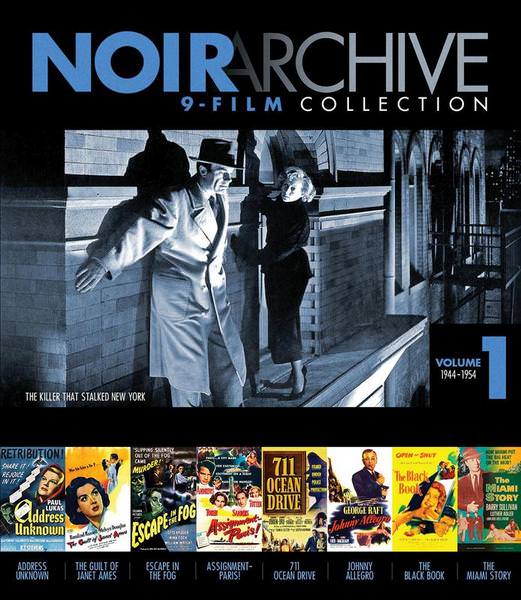 Very conspicuously using Sony's font and layout from their Noir boxes (and one of these films comes from their Bad Girls of Noir sets, along with some Columbia MODs)
Top

Do we have any reason to believe this won't be a bad PD job?
Top

These aren't PD titles, they're all officially licensed from Sony. I suspect you're thinking of Black Book, but this will be using the superior version Sony released on MOD
Top

Doesn't Kit Parker Films = VCI? Or was that just their distributor?

If VCI is anyway involved with this set, then set your expectations very low.
Top

All Columbia titles, so if they are providing the HD masters, they should look pretty good. On the other hand 3 films per disc, which is definitely doable given some of the runtimes, but hopefully they have competent encoding.
Top

Wow, I'm very excited for this box set. I've had Escape in the Fog and Address Unknown in my wishlist for a while, and they are about $15 each. I haven't seen Johnny Allegro but really enjoyed the Warner Archive remastered disc of Tetzlaff's The Window. And I love The Black Book - I have the German KochMedia release (cost me $12), which I think looks nice (compared to the hideous smeary cable copy I watched for years), but $50 for an upgrade of all these to blu-ray, plus these additional new noirs I've not seen, is an easy purchase for me. And seeing that Sony noir font is reassuring, as are Domino's and nitin's notes.
Top

I don't know how successfully it's poison pen plotting works - although there's something to admire in it's ice coldness - but Address Unknown is at the very least visually ravishing, with Menzies visual background coming through clearly. There's a riot in a theater scene in particular that stands out, with fascists practically slashing there way through the movie screen.
Top

nitin wrote: ↑
Tue Dec 11, 2018 3:12 am
All Columbia titles, so if they are providing the HD masters, they should look pretty good. On the other hand 3 films per disc, which is definitely doable given some of the runtimes, but hopefully they have competent encoding.

Someone on Hometheaterforum contacted Kit Parker (asking not to over-use DNR as on previous KP blu-ray releases), and this was the posted reply: "Many thanks for taking the time to write. We are using the Sony masters as-is, and I agree with you about the overuse of DNR."
Also, the pre-order price dropped on Amazon to $33 and change.
Top

Footsteps in the Fog is great but already has a region-free release with great extras from Indicator. The Night Holds Terror is weak and 5 Against the House is awful (and still not a Noir now just as it wasn’t a Noir when Sony first put it out). Will have to watch my copies of the other titles before making a purchase decision
Top

The Crooked Web is... okay, maybe worth watching just for Mari Blanchard. I don't mind 5 Against the House but I sure don't need to see it again. I rather enjoyed The Night Holds Terror even though there isn't anything special about it and The Desperate Hours is unquestionably a better take on the same story.

I haven't seen Bait, but the other Hugo Haas/Cleo Moore pictures I've seen were duds.
Top

I've only seen the Other Woman so far, and I enjoyed the perversity of Moore's revenge (she ruins the life of a director who cuts her from a bit part in his film, but of course she was awful in it and deserved to be cut!). I wouldn't call it a great film noir by any stretch, but it was fun
Top

Its DVD release was already one release too many.
Top

Well I'm not familiar with the other films in the set, but I enjoy 5 Against the House and I'm happy to see it included.
Top

Most amusing thing about volume 2? Canadians can preorder the second set on Amazon.ca, but have no avenue to preorder the first one from them.
Top

I haven't seen this announced anywhere but Noir Archive Vol 3 is coming in September http://thesprocketvault.com/product/noi ... l-9-17-19/

Looks like I'll be getting another copy of The Crimson Kimino. I haven't heard of the rest except The Lineup (1958) which is fantastic.
Top

Really hope Murder By Contract is in the next set.
Top

The first three sets announced have been chronologically contiguous so that ship may have sailed. Guess it depends if they're willing to dig into the 1960s as a "noir" period or cycle back - I really do hope they go back and mine more of the 40s and 50s material in future.
Top

Well, I have to buy this for The Lineup, one of my top 3 or 4 noirs. I bought the TT Crimson Kimono and was gonna unload it since, while it's good, I don't really need to see it again. The Case Against Brooklyn is okay, Shadow on the Window is meh. Hopefully one of the others will be a buried treasure. I really hate owning a set for just one film, but there's no way I'm not getting The Lineup.
Top

Dipped in with Address Unknown last night. Nice enough presentation of an interesting little film I'd never heard of before. Sounds like Escape in the Fog is the only title with some image issues, allegedly inherent to the source. If AU is representative of the rest of the titles, I can't imagine not blind-buying future sets at this value (altho Volume 3 looks like it might be 2-disc which raises some concerns...) - I expect to have a lot of fun with these over the next few nights!
Top

For the price I'm definitely enjoying the presentation of these films so far. I don't know if it's just my copy but the biggest annoyance with this set is that 711 Ocean Drive and The Killer That Stalked New York are labeled wrong on the discs. Hopefully they can do a simple check next time around.
Top

Are any films on these volumes upgrades of the Forgotten Noir discs?
Top

Could anyone confirm please whether Vol.1 is Region A locked or region-free?
Top
Post Reply
33 posts