) but the upcoming slate is ambitious and promising
Top

It is ambitious (26 movies !) but I'm not sure many of them are that interesting.
Note also that in some cases, some of these are already out in France, either by Gaumont or Pathé, possibly in region free BDs with Eng subs (L'assassinat du père Noël and Goupi mains rouges definitely are).
Top

Add to that list La Vérité de Bébé Donge. This Simenon adaptation by Decoin with Gabin and Darrieux is a must but similarly available with eng subs from Gaumont. The other Darrieux -Decoin vehicle the 1941 Premier Rendezvous is not available with subs but of lesser interest unless seeing a younger Darrieux ride out Ledoux's modest sexual deceit rings your bell. The other Simenon adaptation with Raimu M. Souris is intriguing and otherwise unavailable. As for the 2 x L'Herbier I don't know these but will see what this new label's track record is like re quality and extras before taking the plunge
Top

I ranked that Doniol-Valcroze film dead last in my look at first features of Nouvelle Vague directors, but I still support it getting a release, if just to start offering American viewers a more complete picture of the movement
Top

Yeah, I wouldn't buy it for a penny, but I hope libraries do to give some much needed context. Not only good movies deserve releases.
Top

Haven’t heard of most of these, but always exciting to see a new company with interest in previously unreleased films spring up. Still so many holes in the DVD/Blu-ray market.
Top

This and Futures vedettes is available from Amazon. Any takers or reports?
Top

I just put in a ship-to-home order at B&N (for a pretty reasonable $17) for Fric-Frac. I’ll report back once it arrives. Looking forward to the special feature that’s supposed to be about French 30s films generally.
Top

Looking forward to the special feature that’s supposed to be about French 30s films generally.

I ran through the whole disc tonight after work. The film itself is one of those typically slight 30s French comedies - very chatty. There’s a gang of ne’er-do-wells, an ineffectual protagonist who falls for one of them, some heavy drunk acting from Michel Simon, etc. A few jokes did make me chuckle. It’s not much to write home about, but a fun way to kill an hour and change if you like the actors involved.

The best thing about this disc is undoubtedly the transfer. It’s not at all what you’d expect from a fledgling label. The grain is fine and discernible, there’s not any notable macro blocking, and the whole thing is nice and contrasty. It looks much better than I was expecting, given how little publicity it’s gotten. I’m not sure it’s even out on Blu-Ray in France, so this is even more impressive. Bravo on that front.

The subtitles are pretty good considering how slang-heavy the film is. (At one point early on, one of the characters remarks “You translate slang I don’t know into slang I do!”) There are a few small issues, unfortunately. For one, the subtitles are bright yellow - distracting in a color film, but downright unforgivable in a black-and-white one. They were obviously done by a British translator (“arse” for “ass”, “favour,” “theatre”), which seems strange for the American market, but not a deal-breaker. One or two of the timings are off, although not to a horrible degree. There’s some Javanais that’s handled very literally, which probably isn’t what I’d have done, but I suppose that’s a personal choice. Some of the punctuation is inconsistent - “Mr.” is given a period at the end once and only once, and the line “odds are 2021” probably should have been “odds are 20 to 1” or summat. Little things like that mean it’s not a perfect track, but Criterion’s made bigger slip-ups, and I’m sure I wouldn’t have noticed half of these had I not been going through looking for them.

The few extras are...well, let’s start with the disappointing. The feature on 30s films in Paris promised on the website? No such thing on the disc. Instead, we get a ~7 minute “behind the scenes” piece that I’m not sure how to describe. It starts by providing a few factoids about the production of Fric-Frac, which are nice, before moving into a bizarre segment about cigarette advertisements featuring Fernandel and Simon. These are subtitled and interesting curiosities, but I can’t help feeling they’d be better served separated from the first bit. But far and away the strangest thing about it is that it’s narrated by a text-to-speech robot that is equal parts insufferable and hilarious. “Michel Simon” becomes “Michelle Semen”, and “Claude Autant-Lara” is so mangled that I can’t even attempt to spell it here. I could have done a more listenable voiceover in five minutes using one of the compression mics sitting around here, and I’m sort of astonished that nobody listened to this and realized what a bad idea it was. The trailer is a nice addition, but it’s not subtitled, so it’s essentially useless if you’re not a French speaker. Far and away the best extra is a small booklet of photos accompanied by more factoids, which range from slightly interesting (details on filming locations) to painfully obvious (I had no idea the Germans were invading most of Europe in 1939!!!). Still, it’s a cleanly laid-out little book, and I’m glad it’s here.

The packaging as a whole is quite nice, and the disc looks extremely professional from the outside. It all comes in a nice clear slim case, which is again a pleasant surprise, as I was expecting a bog-standard blue one. There are far uglier studio and boutique packages, honestly. Unfortunately, the running time of the film is listed at 92 minutes, which isn’t correct - it’s actually 106.

Small issues like this one mar the overall release, which is a shame given the visual quality of the main feature and the general presentation. I’m going to get in touch with Cinetrove about a few of these (yellow subs, robot voiceover on the extra, unsubbed trailer) in the hopes that they can improve their future discs.

So while not a perfect start, a promising one. I’ll be keeping an eye on this label.
Top

During the early sixties, a ground-breaking format called "nouvelle vague" was unleashed upon French cinema with a force that forever changed the contemporary style of that era.

This "new wave" form rejected the traditional "old Hollywood" sense of stories based on narratives and structures from earlier media, namely books and theatre. The "new" directors did not want to hold the viewer's hand through each scene and direct their emotions, feeling that interfered with the ability to perceive and react to film as in real life.

L'EAU A LA BOUCHE (aka A Game for Six Lovers), a tale of comedic errors and mistakes centered around a simple story where the women are looking for love (and sex) and so are the men, is typical nouvelle vague - a story is told, but it's the mood that makes the film with its camera angles, scenery, and discreet lighting.

Featuring the directorial debut of Jacques Doniol-Valcroze, the film stars Françoise Brion, Paul Guers, and Alexandra Stewart as the heirs to their grandmother's estate, who gather with a notary to share her inheritance. Very quickly, however, the light-hearted atmosphere unwinds and alters the reunion. The chateau becomes the perfect languid setting for intimacy and permissiveness, and a romantic ménage unfolds with six would-be lovers paired off, spending the night making love.

The film's true sense of nouvelle vague is demonstrated perfectly during the castle scene; the camera circles the castle in the dark, showing only the outline of the castle silhouetted against the vastness of the night, as the glorious soundtrack, written and performed by Serge Gainsbourg, enhances the beauty of the moment. 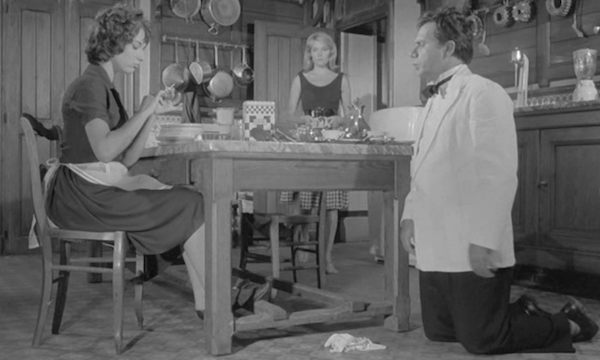 L'eau à la bouche (Jacques Doniol-Valcroze 1960)
Not so much a watering of the mouth, what we have here is spit. Doniol-Valcroze conveniently gets left out of being classified as one of the Young Turks despite also writing for Cahiers, and I think the easiest explanation is he’s so inept as a filmmaker that including him with a group of greats would only bring down the overall average. I called this film “worthless” five years ago on this very board after my first viewing, and watching it again I fear I may have been too kind. The story here is the same hoary romp through the palatial estate nonsense that Fassbinder had so much fun parodying in Chinese Roulette, but were that the familiar and surprise-free narrative the biggest flaw here. No, the film is so poorly made that it’s hard to believe its director had ever seen a film at all, much less written at-length about them. The film starts off dreadfully, with a flashback for no reason other than that beginning the film with the next scene (ie first chronologically) would have sent audiences right out the door as we get an endless and uninteresting phone conversation written, shot, and performed with all the interest and skill of two people reading ingredient lists off cans. It’s a remarkably awful scene. Doniol-Valcroze soon shares his preferred method of transitioning edits between scenes: amateur-hour zoom-ins. Good lord, so many scenes here end with unnecessary and awkward zooms that one wonders why a cineaste felt compelled to crib from TV soaps. The film is not clever or funny, and the joyless moroseness copies over even to the “lighter” moments, most notably the extended chase in which a lustful servant chases Bernadette Lafont through four or five stories of the estate, forcibly removing her clothing piece by piece in his effort to rape her. This isn’t funny but I could see this situation potentially being played for laughs, or heightened for dramatic terror, but here it’s just there, flat and awful. So, a grand summation of the film at-large.