That's an interesting conflation--I don't mean to jump on it there like a nit-picker, but it suggests a really interesting reading of the material in the movie––because it's the ex-cop's partner who picks up painting, and the ex-cop who does the pilgrimage. But because the paintings are Kitano's own, done in his unmistakeable style, it's easy to think of them as the ex-cop's paintings.

The two cops face a similar loss of meaning in their lives, and they pursue meaning in really different ways. The ex-cop drifts with increasing violence towards his seppuku–like ending, while the partner paints with increasing skill and thematic sophistication, and rejects the idea of suicide, even as he is disappointed in the direction his life has gone.

I wonder if Kitano means for us to think of these two as the same person, or as differentiated extrapolations of his own thinking? Faced with the end of what gave your life meaning, do you bow out consistently, drawing the elements of your life to a logical or aesthetic conclusion, or try to make something new of yourself? That might not be an adequate way of expressing what's happening in the film. But it seems as if the two detectives--the former partners in the picture, linked after the case that ruins them by the narrative structure of the film, which neatly subdivides between their different stories--are two sides of Kitano's own mind, as he thinks about the future and imagines two possible destinies. In his own life, Kitano seems to have taken the path of the cop-turned-painter. Hana–bi really felt like the apex of Kitano's early films, at once the most gruesome, florid and at the same time measured of his police/gangster pictures, with the most austere sense of humor and a kind of elegance and transcendental lift that the other films were for the most part going for, but didn't achieve with the effectiveness this film had. The later films after Hana–bi are more diverse in their subject matter, but also maybe missing some of the special spark in this movie. In a way, I wonder if the romantic in Kitano wanted to retire after this movie, but instead went on making films more florid and experimental, but never again as close to his heart?
Top

Both films have new 2K restorations. As with Hana-bi, the first 1000 copies of each feature cardboard slipcases with new illustrated artwork by Marie Bergeron supported by Filmdoo's Film Creativity Competition. I like Fireworks and Kikujiro, but I also hope someone gets around to releasing Kitano's earlier films on Blu-Ray. I tend to think that his earliest films are his strongest. Fireworks, his international breakthrough, while admittedly powerful, seems more sentimental, less original in tone, and a bit more conventional in style than the films that preceded it. I haven't paid much attention to his films since Dolls, which I thought was an obvious play for arthouse appeal that jettisoned most of what made Kitano an original.
Top

I'm not the biggest fan of Dolls either, but I hope it will sell well and pave the way for more - would love to see Scene at the Sea and especially Kids Return on Blu (the latter has been out already for a while in Japan). How cool that they managed to get Jam Session for the Kikujiro disc!

In other TWF news, have we not mentioned their limited edition Blu-ray of Khavn's Ruined Heart here yet? Out in December, it's up for pre-order now. Massive expectations for this one.
Top

I always liked Dolls a lot, and have included in my list of favorite Kitano films ever since its release. Hoping for a Sonatine Blu -- as no DVD version yet has been "perfect".
Top

jonah.77 wrote:
I like Fireworks and Kikujiro, but I also hope someone gets around to releasing Kitano's earlier films on Blu-Ray. I tend to think that his earliest films are his strongest.

Someone asked about Brother, on blu-ray dot com I think, and Third Window replied with a maybe, saying they'd rather do the remaining earlier Kitano's first. If the first three are good sellers. I hope Getting Any? isn't the main priority after this first batch.
Top

That was a pretty brutal discussion to read. It's very true to my own modest experience programming festival material. South Korean and Chinese film companies were much more eager to get the film out there to an audience. The Japanese held back and asked for a ridiculous price. They were, literally speaking, over-valuing the films. Whereas the South Korean companies would even pay the cost of shipping the reels to the United States. They're really getting at the different mindset in Japan regarding accessibility to foreign markets. But I wonder what's driving that thinking?

I wonder if the production economy in Japan is such that filmmakers need big, immediate cash sales in order to survive? More and more I read things that suggest that it's very hard to make a living making films in Japan.
Top

Everything I have ever heard about film rights holders in Japan (with only a few exceptions) suggests that they are incompetent in dealing with foreign rights. This is especially problematic in that more films are made than there are theaters that will show them in Japan, so foreign distribution (especially for non-blockbuster films) is especially vital.
Top

Can that really be true, that more films are made than the theaters can screen? I thought that film production in Japan had reached some historic low ebb.

One of the things touched upon in the panel discussion is that most of the film professionals in Japan are looking solely at the domestic market. It definitely seems like there's an inward focus that keeps larger world audiences away. It reminds me of Donald Ritchie's comment years ago, asking the distributors of the complete Akira Kurosawa box sets why they didn't include English subtitles and being told, "our people don't care about that sort of thing." I remember Ritchie's frustration, that he felt that they could have marketed their sets to the entire world, but that the distributors weren't even interested.
Top

I'm going by what I was told a couple of years ago -- as to the mismatch between productions and available screens. Obviously the stuff handled by the big players get screened, but smaller-scale stuff may have little shot of real public exposure (unless it can win prizes outside of Japan).
Top

I wouldn't really know either way. It sounds like Japanese cinema is really out-of-whack in a least a couple of ways. I know there hasn't been a film I've been aware of out of Japan which I have wanted to see in years. I thought I would like Real, I thought I would like The Backwater, but both pictures were awful disappointments. I've been kind of loathe to watch a lot of recent pictures from Japan. I wonder what exactly has changed, because I still love to watch Japanese film from other eras. It feels as if there was a potent supercharge to Japanese cinema, even in the dismal 80s, but which has now departed.
Top

I think there are still good films being made, but almost none that eventually appear on DVD/Blu in Japan have subs -- and the number of English-subbed releases from HK, Taiwan and Korean has also shrunk drastically. So unless one can afford (and cope with) unsubbed releases, one is not going to know. If unsubbed releases were not so expensive, I'd break down and buy more....
Top

feihong wrote:Can that really be true, that more films are made than the theaters can screen? I thought that film production in Japan had reached some historic low ebb.

He's not the only one making that point: Aaron Gerow says that 615 Japanese films were theatrically released in 2014, the highest number in history (though he notes this includes stuff like screenings of live events). It smacks of a very unhealthy bubble given that attendance and screen counts don't seem to be booming.

As for the state of the films themselves, I don't follow Japanese cinema much, but every now and then I'll read something in a festival catalog that piques my interest and never makes it to local festivals (granted this city isn't too good on Asian cinema in generally) or even an unsubtitled Japanese DVD. I'm thinking specifically here of Anatomy of a Paper Clip and Ow—though the latter screened in this year's New Directors/New Films, so I guess it's still making the rounds. Of course this isn't an unusual situation, and if anything the problem is worse with, say, Chinese films.
Top

Interesting discussion , given all that Adam says I must thank his efforts to keep releasing Japanese films on DVD and Blu-ray in the U.K.
Not every Japanese film Third Window has released has been to my taste but without them I wouldn't even have known many of those films existed let alone have a chance to view them with English subtitles. It is a shame he was unable to keep getting these titles into cinemas in the U.K. but even when they did screen it wasn't anywhere I could get to so I really appreciate the physical releases.
I hope despite the apparent negativity from his answers that Third Window can continue to find new Japanese titles to release.
Top

feihong wrote:Can that really be true, that more films are made than the theaters can screen? I thought that film production in Japan had reached some historic low ebb.

It's actually also an issue in France for distributors : currently, there simply are so many movies and so many independant distributors there is no space left anymore for independant distributors to have moderate successes during theatrical distributions. The CNC stats are just appalling, making it look as if film distribution was the new Eldorado (which is simply not the case).
In the US, I remember an interview of Soderbergh explaining that when you compare the stats of today US domestic production VS 2 years ago, there is twice the number of independant movies but they share 10-15% less market share.

And that's only a change which happened over the course of 2-3 years.
Top

Third Window's blu ray of Hana-bi is very, very handsome. It doesn't look like the film has been restored, though it doesn't look like the film needs much. There are a few occasional marks and small, unobtrusive signs of wear. But the transfer boasts exquisite depth-of-field and really nice color. It's the nicest treatment of a Japanese movie from the 90s I've seen on home video. Film grain is finally evident, and we're spared the extreme yellow saturation of the old New Yorker VHS and the extreme blu tint of the Korean DVD. This disc looks very true to the film as I saw it theatrically. Bravo, Third Window! I hope this one is a success, and leads to future releases of great 90s Japanese films.
Top

I hope their future Kitano releases will spell his name right....
Top

Looks like it is spelled right on the cover pictures I've seen.
Top

Just thought I'd update this for anyone who happens to not be following TWF on Facebook/Twitter, or haven't already read it elsewhere (Blu-ray.com etc)...

Sonatine (1993) may be next but they're waiting for the previous rights to expire. Same goes for any other Kitano films they could potentially access in the coming months/years.
Top

Looks like it is spelled right on the cover pictures I've seen.

It's spelled right on the cover, but the menus list his name as "Takashi" 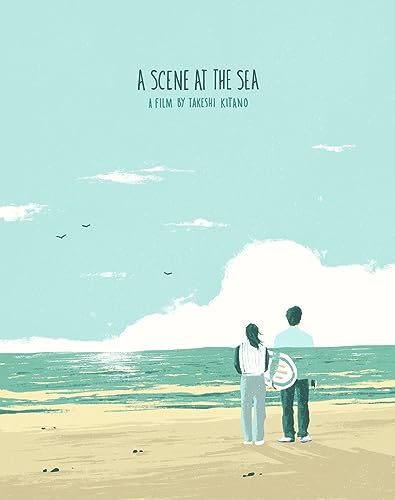 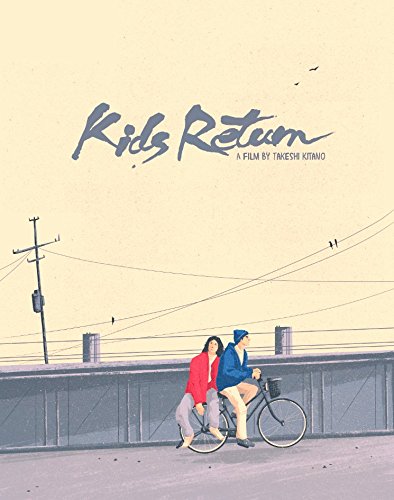 These visuals are just more and more beautiful.
Top

Re: A Scene at the Sea
SpoilerShow
It became one when you mentioned it!