Discuss DVDs and Blu-rays released by Criterion and the films on them. If it's got a spine number, it's in here. Threads may contain spoilers.
Post Reply
74 posts
Message
Author

Fists in the Pocket 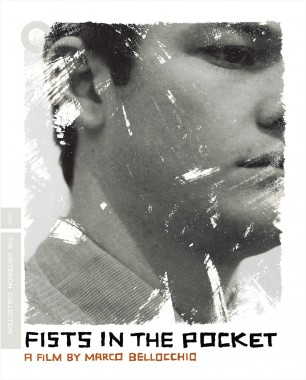 Tormented by twisted desires, a young man takes drastic measures to rid his grotesquely dysfunctional family of its various afflictions, in this astonishing debut from Marco Bellocchio. Characterized by a coolly assured style, shocking perversity, and savage gallows humor, Fists in the Pocket was a gleaming ice pick in the eye of bourgeois family values and Catholic morality, a truly unique work that continues to rank as one of the great achievements of Italian cinema.

kekid wrote:I will start by admitting that I have not seen Marco Bellochhio's debut film "Fists in the Pocket". But what I have read about it is fascinating, and it frustrates me that I cannot find it anywhere. Many of Bellochhio's works have been released on DVD, hence I wonder why this has not seen light yet. Any information will be appreciated.

I haven't seen it either. There's a PAL videotape that can be found periodically. (Seattle's Scarecrow Video carries it.) But I also feel like I'd read somewhere that it was due out on some import DVD. Course that might've just been a dream....
Top

I would love to see this and the 1967 Cina e Vicina (China is Near) get a Criterion (or MoC?) release. These were great exciting pictures from the same era that spawned Bertolucci and Skolomowski and they were highlights of that era. I have only seen two later films by Bellocchio, despite a prolific filmography - Diavolo in Corpo (Devil in the Flesh 1987) and Enrico Quattro (from the Pirandello 1985) and they are both quite dull, and surprisingly uninvolving. Anyone seen any others?
Top

I'm also eagerly awaiting FISTS IN THE POCKET, ever since seeing A BULLET FOR THE GENERAL and BEWARE OF A HOLY WHORE. Lou Castel seemed to have a very unique presence in that era, something boyish but menacing (his character in the Damiani film is nicknamed "El NiÃ±o"). Who has the rights? Is this a possible NoShame title?
Top

It would be fantastic if Noshame was to pick this up. Do they have an e'mail address to send suggestions?
Top

Funny you've asked. I emailed JM a few weeks ago and he said that he can't discuss upcoming titles...blah blah. Maybe it is on the way.
Top

I love this film. I have the BFI VHS version which I bought from the UK three years ago. It plays well alongside contemporary works like BEFORE THE REVOLUTION but, unlike Berlolucci's film, Bellocchio's is more focussed on the family it portrays, like a play. In another sense it can be compared to any film about life in a small town or village e.g.: THE LAST PICTURE SHOW or PHILADELPHIA, HERE I COME.

If you are desperate and must see it, it is still available from Sendit (on order) for 16 pounds.
Top

For those of you in the Boston area, it's being screened twice at the end of the week at the Harvard Film Archives - www.harvardfilmarchive.org !
Top

Fists in the Pocket is a great film: tense, nasty and claustrophobic (just like real family life!). I rate it much higher than Before the Revolution, which I can see would have pushed lots of the right buttons in the mid-sixties, but I don't think has aged particularly well (though Bertolucci fans should take whatever I say about his films with a pillar of salt).
Top

A dark and perverse portrait of family dysfunction, Fists in the Pocket stunned moviegoers and critics alike when it arrived on the scene in 1965â€”the feature debut of a then twenty-five-year old Marco Bellocchio. This award-winning work certainly heralded the arrival of a powerful filmmaking voice, and it continues to rank as a truly unique classic of Italian cinema.
Top

A big wow. This is one I've really been looking forward to, without ever truly believing it would be a Criterion release. I was terribly disappointed by DEVIL IN THE FLESH, not by NoShame's disc, but in the movie itself. Dull, unexpurgated blow jobs included. Hopes are much higher for this and the very young Lou Castel.
Top

jesus the mexican boi wrote:A big wow. This is one I've really been looking forward to, without ever truly believing it would be a Criterion release. I was terribly disappointed by DEVIL IN THE FLESH, not by NoShame's disc, but in the movie itself. Dull, unexpurgated blow jobs included. Hopes are much higher for this and the very young Lou Castel.

Marco Bellocchio's most recent feature "Buongiorno, notte" (good morning, night) is outstanding and I can gurantee that you won't be disappointed.
Top

Now I can throw out my BFI video.

Has this ever officially been released in the US? I notice its a favourite with the bootleggers.

I hate to do this but...any chance of CHINA IS NEAR as well?
Top

solent wrote:Has this ever officially been released in the US? I notice its a favourite with the bootleggers.

I don't think so. There was an RCA/Columbia release of "The Eyes, The Mouth" also starring Lou Castel and directed by Marco Bellocchio back in the 80s that surfaces from time to time.
Top

Mmmm, early Morricone. What is the score like?
Top

jesus the mexican boi wrote:There was an RCA/Columbia release of "The Eyes, The Mouth" also starring Lou Castel and directed by Marco Bellocchio back in the 80s that surfaces from time to time.

There's a 16x9 r2it DVD of "The Eyes, The Mouth" with English subtitles. Classic Bellocchio.
Top

I always thought there was something kind of off about the Criterion summary for the film (I think it was the use of the word certainly, it almost seemed like they were justifying the film's inclusion in a weird way). It seems Criterion would agree, seeing as the summary has changed.

"Tormented by twisted desires, a young man takes drastic measures to rid his grotesquely dysfunctional family of its various afflictions in this astonishing 1965 debut from Marco Bellocchio. Charged by a coolly assured style, shocking perversity, and savage gallows humor, Fists in the Pocket (I pugni in tasca) was a gleaming ice pick in the eye of bourgeois family values and Catholic morality, a truly unique work that continues to rank as one of the great achievements of Italian cinema. "
Top

Perhaps I'm just unobservant, but I cannot remember this being the director-approved title that it now is, on Criterion's site. 'More' indeed...
Top

Updated specs since the site returned.

Back cover and spine
Top

Stunning. One of the cleanest, sleekest Criterion transfers I've seen in a while. There are hints of edge enhancement sprinkled throughout, but Alberto Marrama's cinematography pulsates with ferocious vibrancy. The mono Italian soundtrack is considerably less rewarding: The sounds of the echo-chamber bathroom in the film come through evocatively but I had to really pump up the volume on my system to get dialogue to register.

A blind buy for me, as this one sounds right up my alley!
Top

I've wanted to track this film down ever since I read David Thomson's review of it a few years back in his New Biographical Dictionary of Film. He wrote;


Fists In the Pocket was one of the most striking debuts of the 1960s: a study of the incestuous mesh of a family of epileptics - passionate, neurotic, barbed, and destructive. Epilepsy served Bellocchio, as it had Dostoyevsky, as a sign of social decadence and family claustrophobia, and as the symptom of a distorted psychological nature. The central figure - played brilliantly by Lou Castel - is victim, hero, and destroyer, the life force running riot. How autobiographical is Fists In The Pocket? Bellocchio has confessed that the film was made to resolve many doubts about himself and his future. Furthermore, its intensity may have grown out of its necessary economy....If I hadn't had such a tight budget, Fists would have been a naturalistic film, with a more accurate sociological - that is, social - background. It would maybe have been after the style of a Renoir or a Becker film, in other words close to the French novelistic tradition which has always fascinated me. They say that hunger sharpens the mind.... There is no question but that the mood of pathology justified and sustained the trembling surrealist pitch of the imagery and forced Bellocchio to obtain wounded performances from his cast. The difficulties of a first feature seemed to merge creatively with the pain of a young person...

I respect Thompson, though I do not worship him, and this was enough for me to send several emails to JM asking specifically about this film. No doubt they already had it in the works when I got the standard "thank you for your suggestion..." reply, but what a pleasant surprise to see it appear on the Coming Soon page.

Incidentally, Thompson goes on to remark that Bellocchio later made a film called Gli Occhi, la Bocca / The Eyes, The Mouth, a sort-of sequel to Fists, also featuring Lou Castel, and incorporating footage of the earlier film into the main body. Thompson claims it's one of the finest films of the eighties. I had a brief hope Criterion might combine both films into a two-pack, but oh well. Has anybody seen The Eyes, The Mouth or know anything else about it?

A review of the dvd release from the Village Voice
Top